The rumors are true: Kasim Reed aims to return to the Atlanta mayor’s office.

Reed, who served as mayor in 2010-2018, made his long-rumored shakeup of the race official on June 9 by filing to raise money for a campaign. 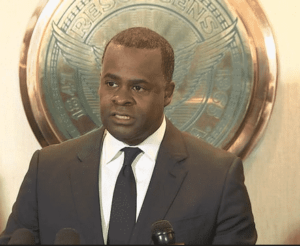 Incumbent Keisha Lance Bottoms, a protege of Reed, chose not to run for reelection on the Nov. 2 ballot after a single term. The wide-open race to replace her has already drawn several candidates, with the major contenders including City Councilmembers Antonio Brown and Andre Dickens, attorney Sharon Gay and City Council President Felicia Moore.

A former state senator and state legislator, Reed was known during his mayoral tenure for pushing through a major reform of city pensions and redirecting funding to the Atlanta Police and other departments. His administration was marred by a federal investigation into bribery and other misconduct that has already scored some convictions. Reed has not been accused of personal wrongdoing.

Reed also was known for a combative relationship with the press. One of his press aides was convicted in 2019 of a criminal violation of the state Open Records Act for blocking media access to water bills for Reed’s brother and City Council members.

No mayoral candidates are officially on the ballot yet, as the qualifying period doesn’t arrive until August. More candidates may emerge and some current ones could back out.

New round starting in battle over Georgia election bills