Reflections from Stone Mountain: keep the Confederacy in the past 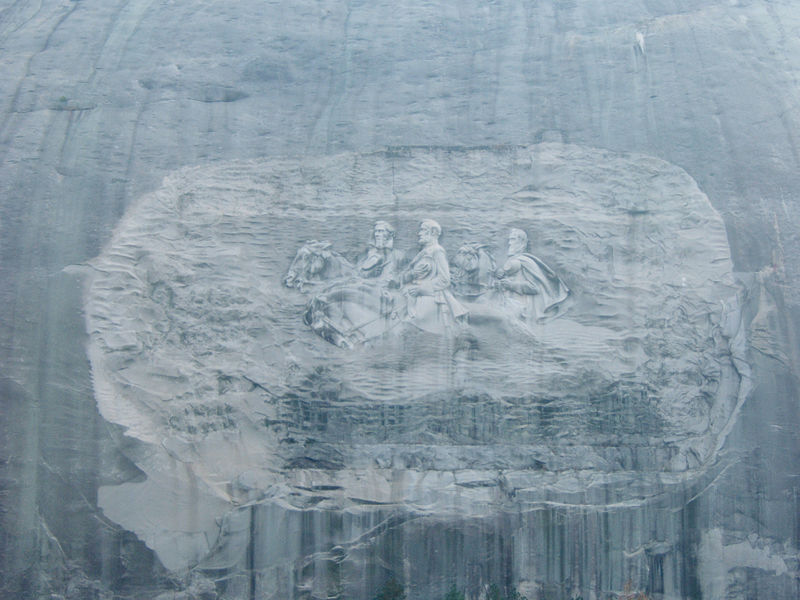 I spent a portion of my weekend at Stone Mountain Park. Yes, I went to see white Southerners rally to legitimize their legacy and the Confederate flag.

Before reaching the rally, I observed dozens of individuals – many of them African-Americans – observing a Saturday morning tradition of convening at the park.

Four family reunions were scheduled that day. Yes, they were all black families. DeKalb County and the area surrounding the park is a mecca for those who benefited the most from the fall of the South. How appropriate.

Now, I didn’t go up and down inspecting each pickup truck sequestered in a back lot at the park but, by and large, attendees appeared to be from rural Georgia or the outskirts of the metro region. And, I doubt they stepped out of stately Antebellum-era homes to make the trek to DeKalb County.

Direct descendants of plantation owners aren’t rallying atop the largest high relief sculpture in the world in protest of days gone by.

Instead, they’re members of the state legislature, giants in the agriculture industry and partners in law firms – choosing the collaborative spirit of commerce instead of lamenting a lost (and wrong) cause. 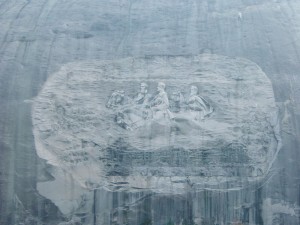 I would guess that the people clinging to the flag are not the ancestry of the slaveholders. Rather, they were the workers, hired help a couple of rungs ahead of back-broken blacks. The one thing the Confederacy granted them was a sense of moral superiority, which the law subsequently denied them as well.

Forty-eight hours prior to the rally, two white males placed the flag on the grounds of Ebenezer Baptist Church and the Martin Luther King, Jr. National Historic Site – weeks after a mass shooting at a historic African-American church in Charleston, S.C.

Yet, nary a word of repudiation was uttered by Georgia’s Republican leaders, many of whom likely came from the same counties as the rally goers.

In his famous “Letter from a Birmingham Jail,” Dr. King praised white Southerners like Ralph McGill Jr. for recognizing the gravitas of the movement.

With the same pen, he rebuked the inaction of white moderates. He wrote, “I have almost reached the regrettable conclusion that the Negro’s great stumbling block in his stride toward freedom is not the White Citizen’s Counciler or the Ku Klux Klanner, but the white moderate, who is more devoted to ‘order’ than to justice; who prefers a negative peace, which is the absence of tension to a positive peace which is the presence of justice…”

At the time that King was writing his speeches, white Southern leaders were fighting to make the Confederate relief a reality. To take it from concept to reality took 57 years – enough time to pass the Voting Rights Act and elect Atlanta’s first Jewish mayor.

Enough time to more properly display the full history and heritage of the state. But not enough time to heal the infected wounds caused by deep-seated hate.

We know those clinging to a heritage of hate are but a vocal minority. Indeed, radical hate is part of the human story.

While on the 2008 campaign trail, then-Presidential candidate Barack Obama sparked outrage when he spoke about people who cling to their guns or religion as a way to express their frustrations. While he called the phrasing in-artful, he stood by the premise of his comments.

It’s human nature to lash out when one feels vulnerable or desires to remain atop a self-appointed social or political dais.

Right-wingers clung to the birther movement in an attempt to deny the legitimacy of Obama’s candidacy. Christian purists clung to the Bible in an attempt to push away the possibility of the nation’s first Mormon president. African-Americans are clingers too – and often they cling to the very spirit of degradation beaten into them on plantations across the South. Clingers also can be Muslims, Jews and people of all races and creeds.

The “positive peace”{ Dr. King called for seems so elusive in the midst of what appears to be the makings of a new civil rights movement. History has put the Confederacy in its place – in the past.

It’s time we all move on as well.

Previous Article
If you think you’ve seen this statue before, there’s an interesting reason why
Next Article
DeKalb Commissioners approve $30 million soccer facility in 4 to 3 vote