Leaders in metro Atlanta know we have a growing housing crisis that’s only getting more acute by the day. Now the Atlanta Regional Commission has made housing – or the lack thereof – one of its top priorities.

Chairing that effort is Nicole Hendrickson, chair of the Gwinnett County Commission, who spoke at ARC’s recent State of the Region breakfast on Oct. 28. ARC unveiled its Local Leadership Housing Action Committee with collective commitments to address housing challenges in metro Atlanta, particularly the lack of affordable housing. 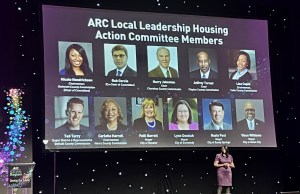 Hendrickson opened by courageously sharing with the more than 1,000 regional leaders about a time when her family experienced housing challenges.

“There was a time in my early life where I was temporarily housed, moving from home to home, and ultimately homeless,” Hendrickson said at the breakfast. “When I had nowhere to go, and I didn’t know how I was going to make it, I imagined the possibilities of a better life. With a strong support system and community, I was able to pull myself out and position myself to help and serve others.”

In a follow-up telephone interview, Hendrickson said her parents got married when they were teenagers – and quickly had two sets of twins. Her father enlisted in the army at 19 so her mother had to raise four children by herself. 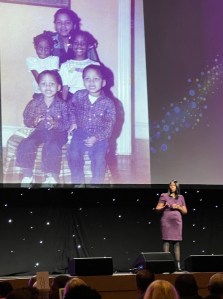 Gwinnett Chair Nicole Hendrickson shares a photo of her family – her mom who had two sets of twins – at ARC’s State of the Region breakfast. (Photo by Maria Saporta.)

“When my mom got addicted to the heavy stuff – crack – she struggled with that for years in the 1980s, it really tore our family apart. We were always split up,” said Hendrickson, who alternated living with her two grandmothers until they moved to a homeless shelter with wrap-around services. “I distinctly remember being so embarrassed because the bus would pick us up at the homeless shelter. I grew up with a level of trauma. Until you’ve experienced homelessness, you really don’t know what it’s like.”

Thanks to a middle school guidance counselor who encouraged her and others along the way, Hendrickson was able to get a college education at the University of Rhode Island, where she majored in psychology. She eventually decided to get a master’s degree in social work at the University of Georgia, getting an internship and later a job at the Gwinnett Coalition for Health and Human Services.

“I loved Atlanta. I loved the fact that black people were thriving,” said Hendrickson, who was drawn to policies that addressed issues like poverty,” Hendrickson said. “That’s how I began to cement my roots in Gwinnett,” Hendrickson said of her job at the coalition from 2007 to 2014. That’s when then Gwinnett Chair Charlotte Nash tapped Hendrickson to work on constituent outreach, especially for Gwinnett’s diversifying population. She was elected chair of the Gwinnett Commission two years ago.

Hendrickson said she ran for office “specifically to address issues like our current housing challenges.” 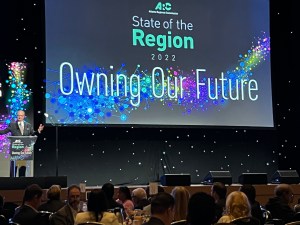 ARC Chair Kerry Armstrong at the State of the Region breakfast on Oct. 28. (Photo by Maria Saporta.)

Not only is she working to change the situation in Gwinnett, but throughout the region.

“When I took office, I was told tackling housing is an impossible task – that it is too political, people don’t want it in their backyard, it will hurt our community, and the list goes on,” she said. “But I have to ask. Is it possible to envision a future where everyone has a roof over their head?”

In her eyes, housing – safe, stable and affordable housing – is a basic human right.

“But a lack of affordable housing to buy or rent is fueling a global housing crisis,” Hendrickson said. “The country has less housing for sale or rent than at any time in the past 30 years.”

In the Atlanta region, there are more than 500,000 people who are struggling to secure or maintain affordable housing.

The ARC developed the Metro Atlanta Housing Strategy – doing the research and laying the groundwork for regional solutions for housing. 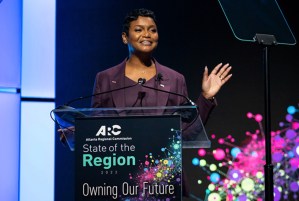 For the past year, ARC’s Local Leadership Housing Action Committee has been meeting to work on solutions with every one of the elected leaders making commitments on how they plan to improve conditions in their communities.

Hendrickson is no exception.

Gwinnett continues to experience significant population growth, but the development of housing – especially affordable housing – is lagging far behind. Gwinnett commissioned a housing study to look at what needs aren’t being met. Part of the problem is that not enough housing units are being built. Institutional investors are buying up affordable single-family homes and apartments. And existing zoning laws stand in the way.

“Unfortunately, our zoning codes allow us to build only three housing types — multifamily, single family and townhomes,” said Hendrickson, adding that makes it difficult to build infill housing. “We are going to be changing our zoning code to allow triplexes, duplexes, cottages and tiny homes. We don’t have any zoning codes for what we call the missing middle.”

For example, one-third of Gwinnett’s households earn less than $50,000 a year, an income that could afford a house of up to $200,000, assuming a 10 percent down payment and a mortgage with a 3 percent interest rate. The problem is that there were zero new homes sold in Gwinnett below $200,000 in 2020. 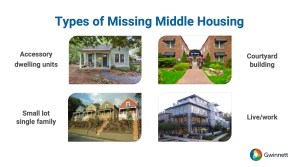 “Right now, apartments are not affordable,” said Hendrickson, who knows that the path to building generational wealth is home ownership.

Finding regional solutions also is challenging because of the varying points of view. Hendrickson said differences of opinion exist all over the region.

“It’s urban-suburban. It’s not wanting to have a particular demographic – poor people, minorities, people who tend to vote a certain way,” she said. “Even the people who are for affordable housing don’t want it in their communities.”

But Hendrickson, who describes her own life story as overcoming impossible challenges, isn’t giving up.

“We are going to continue to work on regional solutions,” she said, mentioning the need for a multi-layered approach. “I want to remain hopeful. But the issues are so complex, and every community is beginning at a different place. “We have already made individual commitments. Now we need to move on making regional commitments.” 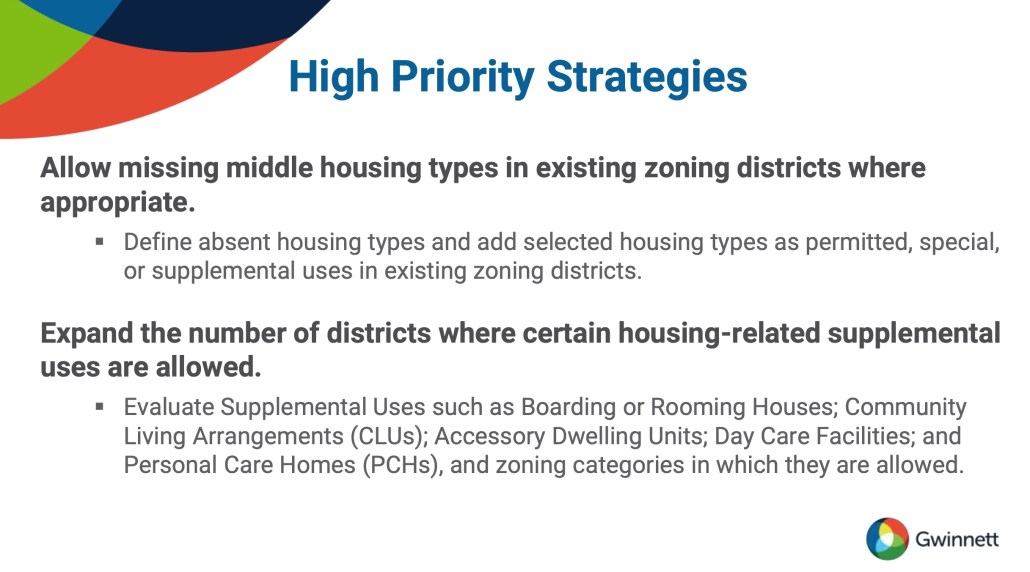 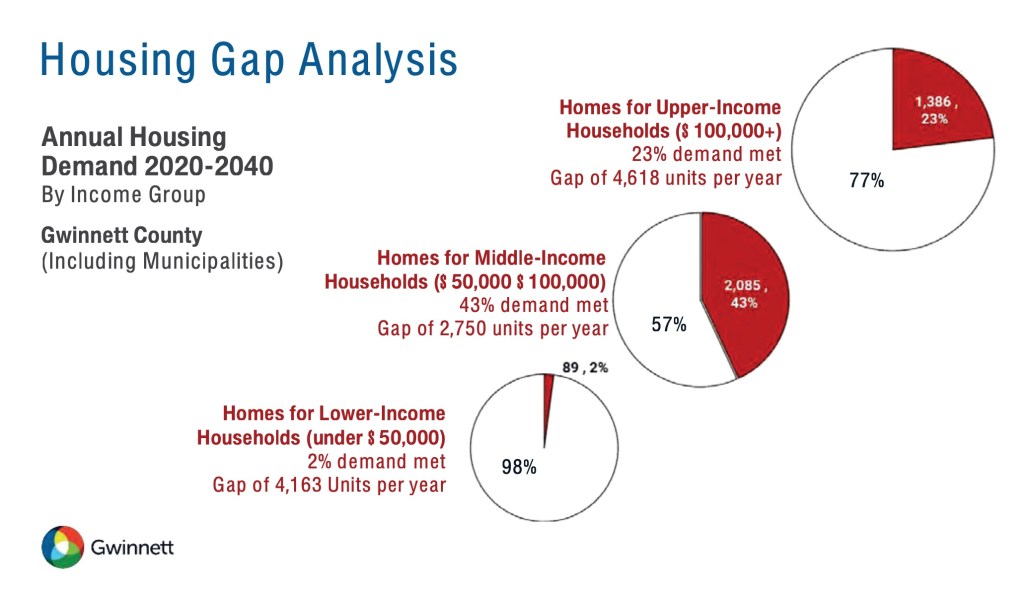 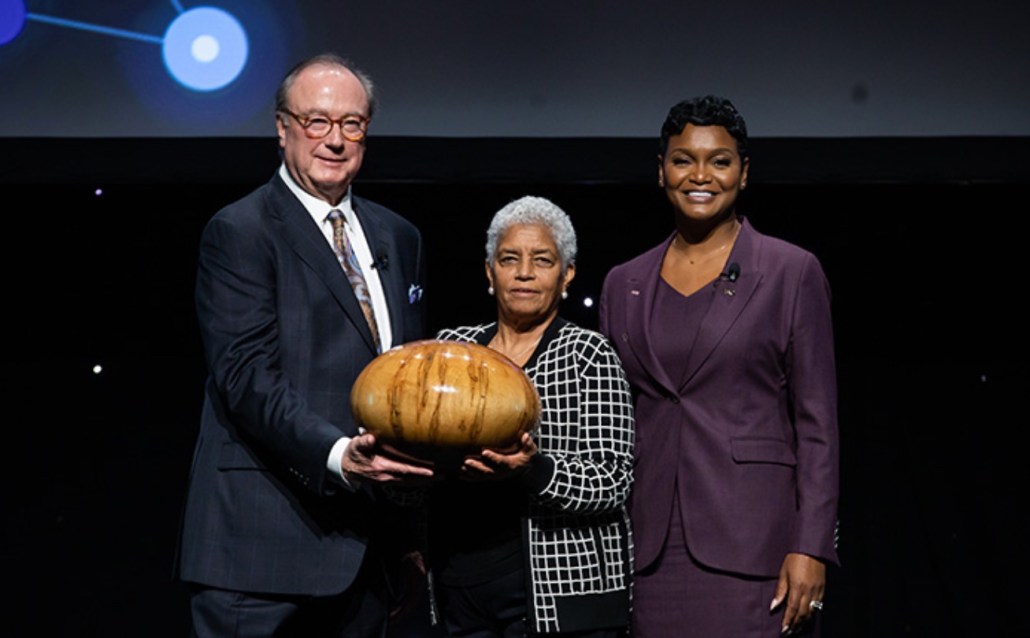