Healthcare, information technology, and transportation are the three industries on which workforce development boards across metro Atlanta intend to focus their efforts over the next five years, according to a draft version of the plan.

The goal is to help individuals get the skills necessary to get a quality job. Some of the occupations that are projected to have a high demand for new workers offer low wages, according to the draft of the Metro Atlanta Regional Workforce Plan.

For example, the three largest industries in 2015 account for nearly a third of all employment in the region. They also generally pay less than the region’s overall average. The three sectors are healthcare and social assistance; retail trade; and professional, scientific and technical services.

The living wage for a one-adult/one-child household in metro Atlanta is $44,600, according to the Massachusetts Institute of Technology’s living wage calculator.

These industries were chosen for reasons including their size, their projected growth rate, demand for workers, existing skill gaps, relevance in multiple counties, and the accessibility and quality of jobs offered, according to the draft plan.

That’s not to say that these are the only industries that are to receive attention: 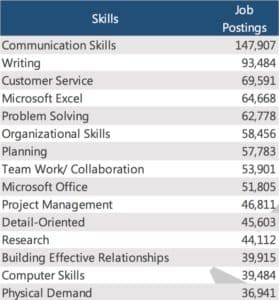 The top skills required in job postings in 2015 align with the three industries that are targeted by workforce development plans. Credit: Metro Atlanta Regional Workforce Plan

The regional plan covers a geography that consists of Atlanta and the counties of Cherokee, Clayton, Cobb, DeKalb, Douglas, Fayette, Fulton, Gwinnett, Henry and Rockdale.

Individual plans have been created for Atlanta, and Cobb and DeKalb counties. Workforce development plans for remaining counties are combined into one plan.

The workforce development agencies are required by federal law to create five-year plans. The state has to have one, as well. Such plans are required by the Workforce Development Act of 1998, which succeeded the Job Training Partnership Act. The JTPA programs were overseen at the local level by Private Industry Councils.

A public comment period is open through Aug. 14. Comments can be emailed to regionalwioaplancomments@atlantaregional.com.

Here are highlights of the three industries as outlined in the draft plan:

Previous Article
Old growth forests – in the city?
Next Article
“Fox and Friends” by Kelly Jordan #6