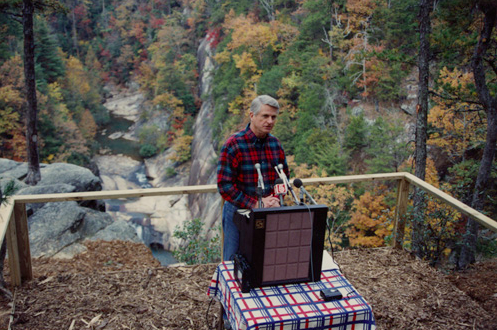 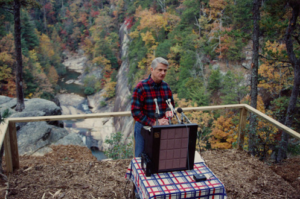 My first blessing-out from Zell Miller was over a flannel shirt.

An environmental group sponsored a candidate debate, and Miller subtly one-upped his rivals by showing up in outdoorsy attire. He thought my comments about it in the paper to be snide, and so our first telephone conversation began with no introductions. Given the subject matter, I wouldn’t say he gave me unshirted hell. But it was undiluted Zell: high and inside, with the sting of a good fast ball.

From that salty beginning, we eventually got along pretty well, as he prepared for and won the 1990 governor’s race, then made an immediate impact on national politics with his key role in helping Bill Clinton secure the Democratic presidential nomination. I’d met James Carville and Paul Begala, his political advisors, covering politics in other states.

When he was tapped to give one of the keynote speeches at the 1992 Democratic National Convention, I wrote that Madison Square Garden would be unlikely to have heard a voice like his, “that speaks of honeysuckle and wood fences in inflections more suggestive of knotty pine and barbed wire.” He must have liked the line. “Listen to this voice,” he began a few weeks later in the Garden. It was a voice, the old Marine said proudly, “that’s been described as more barbed wire than honeysuckle.”

Often, when things were frosty, we’d communicate through Miller’s grade-school classmate, Bert Lance. Miller and Lance were the products of a sort of mountain intelligentsia which bore striking resemblance to the “talented tenth” that W.E.B. DuBois wrote about: Enterprising, able families, living always on the cusp between high expectations and financial ruin.

Before she carried those famous stones from a creek to build the house in Young Harris, Miller’s mother had studied at the renowned Art Students League in New York. Her deep poverty came from the sudden death of Miller’s father, a highly regarded college professor and state senator, when Miller was only a few weeks old. The political persona Miller shaped through years of trial and error emphasized the parts that he shared with the broadest swath of what he thought of as his people. But he was more complicated than that.

He was a child of the mountains, but he learned a lot about the world on the streets of Atlanta, hanging out with the carhops at the Varsity while his mother worked at a wartime plant. That was a potent preparation for a career in Georgia politics.

The flannel shirt notwithstanding, his resentments were almost never personal. They were collective. He would go into tirades over the Atlanta Journal running “Snuffy Smith” on its comic page because he thought his people were being disrespected in a way no other had to tolerate.

He identified with his people’s needs, as well. Of all the things I’ve read about him in the past few days, nothing struck so true as former Senate aide William Claiborne’s memory of coming to work the morning of Sept. 12, 2001 to find Miller by himself answering the phones on the front desk. When the young aide offered to take over, Miller waved him off, saying, “No, I want to hear this.”

Whatever he was as a leader and a politician, he wasn’t that by himself. His zigs and zags from right to left and right again approximated the shifting, sometimes contradictory sentiments of the people he aspired to lead.

He listened, intently. He gained a knowledge of every corner of state government that was unmatched by any of his peers, and with the growth of state government will probably never be seen again. Yet he was a keen student of what was going on outside the Golden Dome as well. The late Ogden Doremus once observed that the most successful lieutenant governors were those who cultivated the misfits in every county who couldn’t get in the door of the governor or speaker. Miller cultivated for 16 years. He overreached with his 1980 challenge to Sen. Herman Talmadge, but regained his footing and hitched his stars to the burgeoning economic and political power of Gwinnett County, until then largely ignored in state politics.

Miller always had a distaste for the “spendarama” at the end of each year’s legislative session, and his appointment to the U.S. Senate only sharpened his differences with big government and the Democratic Party, culminating in his second national convention speech, to the Republicans in 2004. Partly as the result of a series of personal and family health problems reminiscent of Job, he also moved sharply in his later years toward the religious right.
He’d lived a long and restless life in the public eye before he began his decline, and touched the lives of more people than anyone in the state. Let him go back now to the mountains he loved, and rest in peace.

Previous Article
Metro Atlanta absorbed eight of 10 Georgians who arrived in past seven years, Census reports
Next Article
A Note to the Entrepreneurial Hustle of Artists and Businesses.