A report that criminal suspects facing more than 2,000 felony charges were released without bond last year in Fulton County – including 35 charges of child molestation and 11 charges of enticing a child for indecent purposes – has renewed calls for reform from members of the Buckhead Council of Neighborhoods. 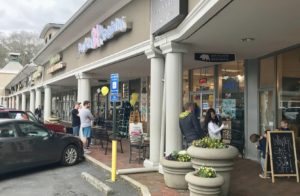 These figures for “released on own recognizance” were in a long list presented at the BNC’s Jan. 9 meeting. And these were just the crimes against children. The list of charges for which suspects were released without bail included 1,028 charges of aggravated assault, and 856 charges of possession of a gun or knife during the commission of a crime.

Toward the end of the meeting, one man stepped forward to call for more to be done to protect children – he said his daughter is 8 months old.

At its first meeting of the year, the BNC resumed its conversation about public safety. The group took no official action.

Atlanta police Major Andrew Senzer said he has noticed strong support for police in the community since he took over in November 2019 as commander of Zone 2, which includes the Buckhead area. While the overall crime rate in the city dropped in 2019 compared to 2018, Senzer said, the rate of violent crime is ticking upward.

“We’ve got to be more vigilant in violent crime,” Senzer said.

The simple act of not leaving guns in vehicles is part of that vigilance, Senzer said. A shotgun and case of shells is now in the hands of criminals because the cache was in a vehicle stolen from the Peachtree Battle Shopping Center. Senzer said the driver had left the vehicle idling and unoccupied.

Amber Conner compiled and presented the list that prompted a buzz in the audience. Conner is the newly named head of security for the BCN and serves as CEO of the non-profit organization, Concerned Citizens United.

Conner said after the meeting that she fully appreciates the equity issue involving the release from jail of folks charged with crime. 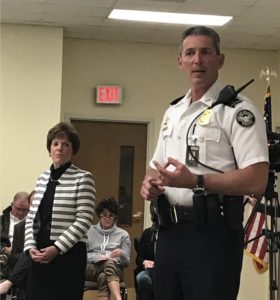 Advocates contend poorer folks without the ability to pay bail should not have to wait in jail for their trial, while those with means to pay bail can be released pending trial. Critics contend that not all offenders without the means to pay bail should benefit from a judge’s discretion to release a person from jail on his or her own recognizance. Somewhere in the mix is a judicial effort to reduce the number of prisoners in jail, and the overcrowding that can result.

A snapshot of Conner’s presentation shows the number of charges in which the suspect was released on his or her own recognizance:

This situation is not related to Atlanta’s bail reform policy, enacted in March 2018. Atlanta waived bail for non-felony charges. However, the Legislature may eliminate that local ordinance.

Republican leaders in the House have sponsored House Bill 340.