The CNN Center, a staple of downtown Atlanta, has a new owner. AT&T sold the building to Florida-based real estate company CP Group. AT&T will lease the building for the news giant but did not specify how long.

Other news around Atlanta:

Atlanta residents citywide can now call 311 instead of 911 when they or someone else is in crisis due to mental health needs, addiction or extreme poverty.

The idea is that criminal behavior that’s related to health or poverty should result in connection to social services rather than jail.

On July 1, the City of Atlanta approved the 911 alternative for the whole city. It’s led by the Policing Alternatives and Diversion Initiative.

Atlanta and MARTA police officers can direct folks to PAD instead of making an arrest if the crime stems from significant mental health or financial needs.

The 311-PAD partnership started in parts of the city in January. 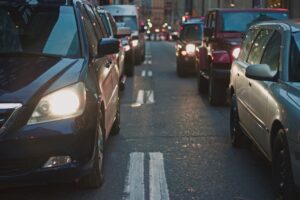 If it seems like the Friday commute is the worst, a new report confirms your suspicions.

If you want to hit the road for smooth sailing, be sure to avoid 2 p.m. through 6 p.m. on Fridays.

Those Friday hours account for 12.3% of all weekly traffic congestion in Atlanta, according to Texas A&M’s Urban Mobility Report. The congestion starts earlier and ends later than other days of the week.

This is substantially lower than 2019’s whopping 78 hours, but that’s to be expected after a pandemic that kept folks at home. In last year’s report, metro Atlanta ranked 7th worst in the U.S. for time spent in traffic.

The slight change in status is nice, but each hour spent idling ends up costing about $20 per driver.

It might be time to reconsider that MARTA expansion. 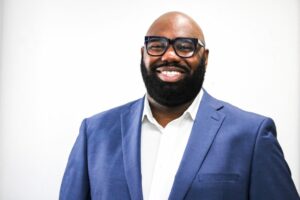 The Atlanta City Council District 10 race is getting competitive, with incumbent Andrea Boone drawing a challenge from Jason Hudgins.

Boone, who has served since 2017, is the daughter of the late Civil Rights leader Rev. Joseph E. Boone.

Hudgins is a trainer for IHG Hotels & Resorts and runs a training and consulting firm called North Star. He has served as chair of Neighborhood Planning Unit T and president of the Westview Community Organization.

His campaign website says he is running “because Atlanta needs more proactive problem-solvers on the City Council. The challenges that face our city like crumbling roads, rising crime, gaps in equity, and displacement can all be traced to the same central issue. Our leaders are more committed to reacting to our challenges than they are to preventing them in the first place.”

The council seat will be on the Nov. 2 ballot. District 10 represents a large portion of southwest Atlanta covering many neighborhoods roughly between I-20 and Cascade Road.

The Atlanta Fire Rescue arrived at the already-crispy restaurant on Wednesday afternoon, finding flames and smoke spilling out of the roof.

There are no reported injuries, and the cause of the fire is unclear.

Back in February, the donut hotspot caught aflame while two employees were present. The case was ruled as arson, but no arrests have been made.

Owner and basketball superstar Shaq has his work cut out for him to bring this business back to life and, this time, without any bad juju.

Nonprofit and government organizations are invited to apply to the Callahan Incentive Grant for their next preservation project. The grant is funded by a $10,000 gift from Barbara and Les Callahan to the Georgia Trust for Historic Preservation.

To be considered, preservation plans must apply to a building listed on or eligible for the National Register of Historic Places and the preservation must benefit the community.

For those interested in preserving the gems of Atlanta, apply by Sept. 1.

Back in March, a tornado ripped through Newnan, damaging over 1,700 homes.

Recovery efforts are on their way thanks to a benefit concert with country singer and Newnan native Alan Jackson. The concert was sponsored by Cornerstone Building Brands, the largest manufacturer of exterior building products in North America.

Cornerstone donated $500,000 in building materials to Habitat for Humanity, along with $100,000 to the Coweta Community Foundation, which manages donations and supports nonprofits in the county.

“I appreciate Cornerstone Building Brands’ help to repair and rebuild my hometown after the tornado,” Jackson said. “There’s a lot of people that lost everything, and this’ll help ’em get a new start.”

The musician is also the ambassador for Cornerstone’s Home for Good project, an initiative to make affordable housing more accessible. 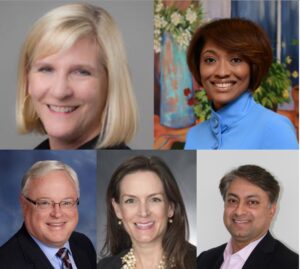 The Agnes Scott College Board of Trustees has appointed a new chair and four board members.

Elizabeth Noe has been named as the board’s new chair. Noe is a 1986 graduate of the university and has served on the board of trustees for seven years.

One of her focuses is female advancement. She served on the Atlanta Women’s Foundation board for six years and is currently on the International Women’s Forum Georgia board of directors.

“I am deeply committed to the college’s mission and to empowering women for success,” Noe said in a press release.

AMB Sports and Entertainment has named Ryan Mucatel as senior vice president of marketing and communications starting Aug. 16. He will report to Steve Cannon, CEO of AMBSE, and the Blank family of businesses, as well as Brett Jewkes, who has taken on expanded responsibilities with Arthur M. Blank, chairman and owner of the organization.

As a member of the executive leadership team, Mucatel will assume day-to-day oversight of sports and brand communications responsibilities for the Atlanta Falcons, Atlanta United, Mercedes-Benz Stadium (MBS) and PGA TOUR Superstore. He will also oversee the marketing and digital functions for the Falcons and MBS, as well as broadcast and creative design shared services across AMBSE.

“Ryan stood out among an excellent candidate field as a great fit for our organization with his experience, understanding of our businesses and alignment to the core values that drive everything we do,” Cannon said. “This is a dynamic time of growth for all our businesses and Ryan’s leadership of our outstanding integrated team will elevate the connection to our fans, guests and customers. We’re thrilled to add Ryan to our leadership team.”

Mucatel joins AMBSE from New York-based Berk Communications, where he has served as chief operating officer since 2019. During his tenure at Berk, Mucatel has overseen client service, operations, new business development and human resources. During almost 25 years working with marketing communications agencies, Mucatel has led brand work for brands such as Amazon, Microsoft, Jordan Brand, Coca-Cola, Activision, Comcast, MasterCard, DraftKings, PUMA, BODYARMOR, as well as NASCAR, MLS, and the NFL.

“Ryan is a proven relationship-builder with a track record of growing brands and business wherever he’s been,” Jewkes said. “He’s a passionate team player with a steady hand who I believe will make an already exceptionally strong team, and our businesses, even better.” 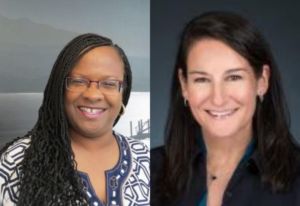 “The amount of experience these two women are bringing will add tremendous expertise and wisdom to our team which will be so valuable as we look to significantly accelerate our giving and impact,” said Fay Twersky, president of the Arthur M. Blank Family Foundation.

Connelly returns to the Blank Family Foundation with nearly 30 years of experience working in and supporting the nonprofit and philanthropy sector including roles with United Way of Metropolitan Atlanta, the Arthur M. Blank Family Foundation, Park Pride, and most recently, the Eplan Group and Coxe Curry & Associates. With expertise in program management, strategy development, and operations, she will oversee Arthur Blank’s personal giving including legacy grantmaking, veterans and military work, stuttering, the Westside transformation work, and each of the Blank Family of Businesses’ Associate-Led Giving committees.

Gulley joins the Blank Foundation with 33 years of experience in community and youth development, workforce development, building capacity in the nonprofit sector, and leading initiatives that engage residents in communities of color throughout the country.

She most recently spent five years with the James Irvine Foundation leading their Better Careers initiative and serving on the Foundation’s Impact, Assessment & Learning team. As the chief of staff to Blank Family Foundation President Fay Twersky, she will project manage board operations, play a key role in Founder projects, serve as an associate liaison, and help lead the Foundation’s Diversity, Equity, and Inclusion work.