On April 15, 1964, construction began on the Atlanta Fulton County Stadium. Mayor Ivan Allen, Jr. chose a 62-acre site near downtown and converted it into a major league sports arena with a price tag of $18 million.

The city convinced the Milwaukee Braves to move and become the Atlanta Braves as we know them today, including star player Hank Aaron.

The stadium hosted many milestones for the city, including a Beatles concert, Hank Aaron’s home run record, the Braves World Series championship and Olympic baseball.

The stadium was demolished in 1997, and the plot was converted into a parking lot at Center Parc Stadium, formerly known as Turner Field.

An Atlanta public school will take on a new name — replacing a reminder of the city’s racist history with the name of an Atlanta Civil Rights icon.

Forrest Hill Academy was originally named after Nathan Bedford Forrest, who served as a Confederate general in the Civil War and was prominent in establishing the Klu Klux Klan. He was named the KKK’s first “Grand Wizard,” the highest position.

On April 12, the Atlanta Board of Education unanimously approved changing the name to Hank Aaron New Beginnings Academy.

Hank Aaron, a record-breaking athlete, played for the Milwaukee/Atlanta Braves for 21 seasons and, with the team, later became one of baseball’s first Black executives. 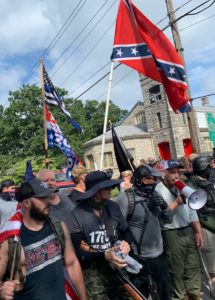 A demonstration with Confederate flags at Stone Mountain in 2020. (Credit: Kelly Jordan)

The Sons of Confederate Veterans won’t get to hold a Confederate Memorial Day service under the granite gazes of Stone Mountain’s monumental Lost Cause carving.

The Stone Mountain Memorial Association, the state park’s official authority, denied the necessary permit to hold the event due to “a clear and present danger,” including racial tensions and COVID-19.

“With the volatile nature of events of the immediate past and ongoing today, there is a clear and present danger to members of the [Sons of Confederate Veterans], potential counterprotesters, park employees and guests,” CEO Bill Stephens said.

Martin O’Toole, a spokesman for the Georgia division of the Sons of Confederate Veterans told the Atlanta Journal-Constitution, “This is a memorial service that is part of the whole purpose for the park’s existence.” 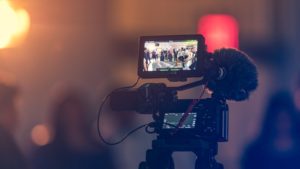 Members of Hollywood are choosing to take their business outside of Georgia. (Credit: Unsplash)

Actor Will Smith and director Antoine Fuqua are scouting a new filming location for their slavery-era drama “Emancipation.”

The movie was set to be filmed in Georgia this summer, but the duo has decided to take their business elsewhere in light of the state’s new voting law.

“We cannot in good conscience provide economic support to a government that enacts regressive voting laws that are designed to restrict voter access,” they said in a statement. “The new Georgia voting laws are reminiscent of voting impediments that were passed at the end of Reconstruction to prevent many Americans from voting.”

The decision comes in the wake of Major League Baseball moving its All-Star Game and draft from Atlanta to Denver, Colo., and a strong social movement to hold corporate Georgia accountable for the new regulations.

Activist Stacey Abrams called boycotts “an important tool throughout our history to achieve social change,” but is openly against withholding business from the state.

“Black, Latino, AAPI and Native American voters whose votes are the most suppressed under SB 202 are also the most likely to be hurt by potential boycotts of Georgia,” Abrams said. “To our friends across the country, please don’t boycott us. To my fellow Georgians, stay and fight.” 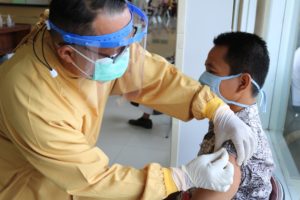 The FDA and CDC recommend halting the distribution of the Johnson & Johnson vaccine to further study its side effects. (Credit: Unsplash)

The CDC and FDA have suggested a pause on the distribution of the Johnson & Johnson COVID-19 vaccine.

The announcement from the top federal health agencies came on April 13, after six reported cases of women developing severe blood clots, according to NPR.

Around 7 million people in the U.S. have received this vaccine, making the adverse and potentially fatal reaction extremely rare.

Still, the FDA recommended halting the distribution of this particular vaccine to study its side effects further. However, providers can still make a judgment call about whether they want to offer the vaccine.

Health professionals say that it’s too soon to know what makes folks susceptible to this reaction.

CDC’s Principal Deputy Director Dr. Anne Schuchat has advised those who received the Johnson & Johnson vaccine within the last few weeks to watch out for severe headache, abdominal pain, leg pain or shortness of breath.

Moderna and Pfizer do not have this potential side effect, according to the FDA, because the vaccines are based on a different technology called mRNA, compared to Johnson & Johnson, which uses viral vector technology.

A statement issued by the White House said that this decision will not significantly impact vaccine distribution because the Johnson & Johnson vaccine only makes up 5% of the shots available in the U.S.

Click here for more information from the CDC about the Johnson & Johnson COVID-19 vaccine. 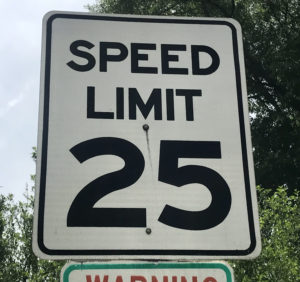 Atlanta’s lead-foot drivers and its cyclists and pedestrians are about to see something new — tons of 25 mph speed limit signs.

On April 20, Atlanta City Council adopted the Vision Zero plan, which will reduce 75% of the city’s roads to 25 mph speed limits, according to a press release.

This year, the city has already replaced about 1,000 speed limit signs on 300 streets.

The change aims to make Atlanta’s roads safer. In 2019, speed contributed to 52% of traffic fatalities, according to the city.

“We envision Atlanta’s transportation network to be one where everyone can travel wherever they need to go safely, reliably and efficiently,” Mayor Keisha Lance Bottoms said.

The historically Black Institution had its accreditation revoked in 2002 due to debt and financial mismanagement. But the candidacy now means access to federal aid for students.

Morris Brown College announced receiving their accreditation candidacy from the Transnational Association of Christian Colleges and Schools, which will allow the school to receive financial aid and Title IV funding from the U.S. Department of Education.

“We are elated about accreditation candidacy and making history,” said the president of Morris Brown, Dr. Kevin James. He also added in a statement that the school intends on making history as the first HBCU to regain its status after a twenty-year hiatus.

The announcement comes on the heels of a partnership between the school and CGI Merchant Group, LLC. The minority-owned global investment management firm focuses on real estate and private equity. It plans to build an upscale Hilton hotel and hospitality management training center for the students studying in the Hospitality Management Department.

Chairman of the Board of Trustees and Bishop of the 6th Episcopal District of the African Methodist Episcopal Church Bishop Reginald Jackson commended James’ leadership after raising funds during last year’s Homecoming and this year’s Founder’s Day events.

Jackson said in a statement that “giving is up and the momentum under this administration is like none we have seen in recent history.”

“Without the resilience, support and prayers from the Board of Trustees, AME church, faculty, staff, alumni and the community,” said James, “we would not be here.”

Enrollment for the fall semester has begun. If you want to enroll or donate to Morris Brown College, go to the school’s website.

The Hammonds House Museum’s Executive Director Leatrice Ellzy Wright will be leaving in May and moving to the Apollo Theater in New York.

During her four years with the museum, Wright helped curate new exhibitions focusing on the African diaspora and celebrating Black artistry.

The board is currently searching for a new executive director.

The Hammonds House Museum sits inside a Victorian home in the West End and holds over 450 works of art that represent the culture and legacy of artists of African descent. 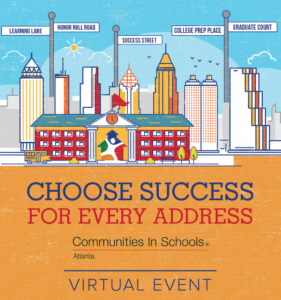 Join Communities In Schools on April 28 for their Choose Success event featuring “Black-ish” star Anthony Anderson. The event celebrates students who are working toward success and community members dedicated to helping them achieve their goals. RSVP to Communities in Schools’ Choose Success For Every Address event here.