Happy National Pride Month! The June celebration is used to recognize the 1969 Stonewall Uprising in New York City, which became a turning point in the fight for equality.

If you’re looking to support your community and move your body, join the Atlanta Pride Run in Piedmont Park on June 20. For over 30 years, the 5K has served as a celebration of Atlanta’s LGBTQ community. This year, some of the ticket proceeds will go to Joining Hearts, an organization supporting residents impacted by HIV/AIDS. 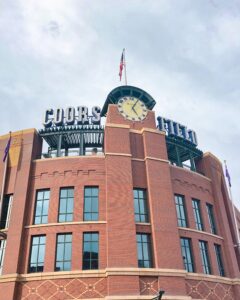 The MLB’s All-Star game will be played at the Coors Field in Denver, Colo. (Credit: Unsplash)

Back in April, the baseball league moved its All-Star Game from Truist Park in Cobb County to Denver, Colo., in protest of Georgia’s new voting law.

The lawsuit requests that the game, scheduled for July 13, return to Atlanta along with $100 million in damages to local and state small businesses, according to the Atlanta Journal-Constitution.

The figure comes from Cobb County’s estimated loss of revenue, although some say the number is exaggerated.

Alfredo Ortiz, president and CEO of the Job Creators Network, has publicly opposed the move, using billboards and a full-page ad in the New York Times to refute the call.

“The financial loss is a punch to the gut and will have an outsized impact on minority-owned businesses,” his letter-style ad reads. “As Sen. Tim Scott points out in a tweet, Atlanta has a majority African American population, while Denver boasts a nine percent make-up. Your decision is punishing the very group you claim to be defending.”

Part of Ortiz’ job is to lead “the defense of small businesses from the onslaught of bad government policies,” according to the Job Creators Network website. Its listed organizational partners include other business groups, like state chambers of commerce, which include both large and small businesses as their members. The organization says its mission is to “educate employees of Main Street America.”

U.S., Georgia, not racist, per state Board of Education

In a 11-2 vote Thursday, members of the Georgia Board of Education approved a five-page document that says no teaching should indoctrinate racism — but nor should any teaching make anybody feel bad about the past.

The board believes “the United States of America is not a racist country, and that the state of Georgia is not a racist state,” the proclamation part of the document reads. (Here’s the original document; we’re waiting on the slightly amended version that passed.)

State Board of Education Member Martha Zoeller, the conservative talk radio host, voted for it.

The state board vote came after about an hour of discussion, available here.

The document also says individual people shouldn’t be made to feel bad about what folks in the past did.

But such phrases could also be used as cover to discourage teaching about systemic racism of the past and present perpetuated by white people against everybody else. (And if that conversation is shut down, it seems to preclude teaching how white allies can help right the wrongs of the past too.)

Esteves said via Twitter that nothing about the state resolution would change Atlanta schools; he only fears it will discourage other districts from tackling equity issues, hate and bias.

The board vote comes just after Republican Gov. Brian Kemp denounced teaching “critical race theory.”  On the one hand, CRT can be as narrow as a legal theory that the legacies of racism, slavery, Jim Crow and so on live on in today’s systems.  But on the other hand, it’s gotten taken up lately, mainly by conservatives, as a shorthand for all the kinds of diversity and inclusion efforts that they don’t like. 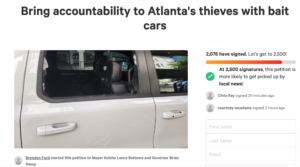 The petition has received over 2,000 signatures in six days. (Image taken from the petition.)

A new petition is circulating — this time, to call out the rate of car break-ins and theft in Atlanta.

The petition, created by resident Brendon Ford, calls on Gov. Brian Kemp and Mayor Keisha Lance Bottoms to “hold criminals accountable or more people will continue to move out of the city to avoid the problems.”

“Examples must be set to hold these brazen thieves accountable for their actions,” Ford wrote.

The petition has received 2,069 signatures so far, with residents recounting their break-in stories, and one user wrote, “I don’t feel safe going anywhere in Atlanta anymore.”

While it’s true that car-related crimes have gone up in the past year, one should also consider that the pandemic had a role in lowering some of the crime rates.

This past May, the Atlanta Police Department reported an average of about 18 car break-ins per day. Or 555 total cases of theft from a car, compared to 302 reports in May 2020 — a 84% increase.

Over $15 million to Boys and Girls Clubs of Georgia

The money, coming from the Governor’s Emergency Education Relief fund, will go to 9,000 kids. The Georgia Alliance of Boys & Girls Clubs will also give $1,550 per child to 34 organizations throughout the state.

The objective is to bring 65% of youth who are performing below grade level standards to reach grade requirements.

The Boys & Girls Clubs of Georgia provide learning programs and recreational activities to 140 communities in 62 counties.

The state of Georgia, for its part, is putting less money into k-12 education than it did two years ago. Federal relief funding is backfilling the cuts that Georgia made in 2020 when the state feared a COVID-19 recession that has not since happened. 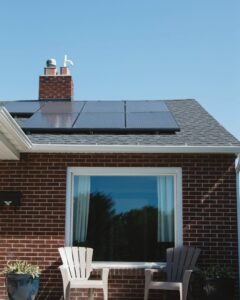 Solar CrowdSource’s efforts have helped avoid the emission of 121,550+ tons of CO2 over 25 years. (Credit: Unsplash)

While the Georgia summer sun might have most running for shade, those intense rays are the perfect recipe for solar-powered energy.

Solar CrowdSource is making solar energy more accessible around the nation. The idea is to allow residents and businesses to buy solar power together, achieving lowered energy costs and a lighter environmental footprint.

Folks can get solar panels at a wholesale price by joining a campaign in their area. Solarize Atlanta 2.0 is open for registration.

The initiative helps residents learn about the benefits of solar energy and can help the City of Atlanta reach its 100% clean energy goal by 2035.

Join the informational meeting on Thursday, June 3, at 6:30 p.m. to learn more about your clean energy opportunities.

Atlanta Jazz Festival back in business

Live music lovers, rejoice! The 43rd annual Atlanta Jazz Festival will be held in Piedmont Park over Labor Day weekend, Sept. 5 and 6. More than 15 artists are scheduled to perform across two stages. Leading up to the festival, jazz lovers can watch the “In the Tradition” video series to learn more about the performers and the genre. Find more information about the Atlanta Jazz Festival here.