Over the weekend, Colonial Pipeline, which fuels much of the East coast, shut down its services after a ransomware attack. 49% of Georgia gas stations are without gas, according to CNN.

The pipeline restarted Wednesday, May 12, but it could take a few days for things to return to business as usual. In the meantime, check Gas Buddy to see which local gas stations are stocked and which to skip. 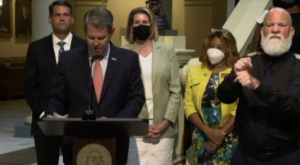 On Monday, May 10, Gov. Brian Kemp signed an overhaul of Georgia’s citizen’s arrest law, which had been in place since 1863.

Kemp and other supporters of the bill promoted it in the name of Ahmaud Arbery, the 25-year-old Black jogger shot near Brunswick last year. Two of three white men arrested in Arbery’s death had claimed to have been making a citizen’s arrest of the young man.

House Bill 479, the new legislation, specifies that in limited cases, civilians can still detain one another, like shopkeepers who witness shoplifting.

“Too often, we spend time under the Gold Dome arguing over differences. But the outpouring of bipartisan support that this bill received, I believe, is a testament to the fundamental character of our state,” Kemp said at the signing. “Today, Georgia is doing what is right.” 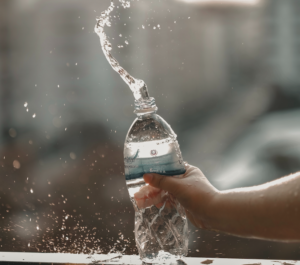 U.S. Sens. Jon Ossoff and Raphael Warnock proposed a bill that ensures volunteers can hand out water and snacks to voters in line. (Credit: Unsplash)

The Georgia pair introduced Voters’ Access to Water Act on May 10. The proposed bill would prohibit states from restricting volunteers from handing out water and snacks to voters in line.

The proposal is a direct response to Georgia state Senate Bill 202; a controversial voting bill recently signed into law, which bars nonpartisan volunteers from distributing water to waiting voters.

The bill would amend the federal Help America Vote Act of 2002.

In other water news, the U.S. Senate recently passed the Drinking Water and Wastewater Infrastructure Act, which includes a $300 million fund to repair lead pipes and remove lead from the water in public schools and communities of need throughout the nation.

Georgia and 22 other states received an “F” grade from “Get the Lead Out,” a report focused on drinking water at schools. The report was crafted by Environment America, a network of environmental groups that promotes environmental values, like clean water.

“Every child, in Georgia and nationwide, deserves clean, healthy drinking water,” Ossoff wrote. “According to the CDC, there is no safe level of light exposure for children.” 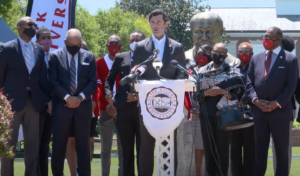 “HBCUs are gems in our nation’s system of higher education,” Ossoff told CAU students and staff during the campus visit.

In March, Biden signed the American Rescue Plan, which includes $3 billion in grants for historically Black colleges and universities and institutions.

“We are so grateful for the critical work done by President Biden, Sen. Ossoff, Sen. Warnock and Georgia’s congressional representatives to help lift HBCUs as we emerge from a once-in-a-lifetime health event,” Dr. George French, president of CAU, said in a statement.

Ossoff said the funds would go towards emergency financial aid to students experiencing financial hardship because of the pandemic; however, the school leaders will have “significant discretion and flexibility” to spend the balance.

“These funds will go a long way,” French continued, “toward elevating our university’s mission of preparing the next generation of future leaders.”

Ossoff mentioned that schools would receive them in the coming weeks. 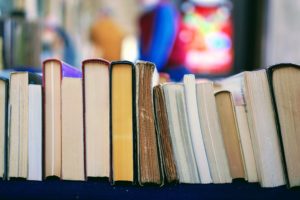 The AJC Decatur Book Festival is one of the largest independent book festivals in the country. (Credit: Unsplash)

This year’s AJC Decatur Book Festival is receiving a $10,000 grant from the National Endowment for Arts.

It’s one of the largest independent book festivals in the country, with up to 80,000 people flooding the town’s four square miles for author signings and many, many books.

The funds will be used to support the 2021 Diverse Voices Building Community literary program, including an event on Oct. 2 to showcase a variety of voices and encourage creative expression.

“While the arts, whether through books, movies, or online performances and programs, have been a sustaining force for many throughout the pandemic, the chance to gather with one another and share arts experiences is its own necessity and pleasure,” NEA Acting Chairman Ann Eilers said in a press release. 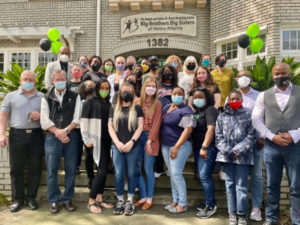 The Big Brothers Big Sisters team in front of the Peachtree building that has been sold (Special: BBBSMA)

From Peachtree Street to “The Met”….

Big Brothers Big Sisters of Metro Atlanta (BBBSMA) has sold its building at 1382 Peachtree St. N.E in Midtown Atlanta, a building it has owned since 2011.

The building has been sold to Greystar Real Estate Partners LLC, an investment, development and management company of high-quality rental housing properties based in Charleston, S.C.

BBBSMA now is building out its new headquarters office at The MET Atlanta, an industrial warehouse space in the West End developed by Carter.

“A move to the West End will allow us to be closer to many of the families we serve,” said Kwame Johnson, BBBSMA’s president and CEO. “It provides easy access to our services, whether participants are driving or taking MARTA. We are looking forward to becoming part of this vibrant neighborhood.”

The Colliers commercial real estate company secured the sale of the Peachtree building. secure this sale.

“We initially sold BBBS’ existing building to the organization back in 2011 with the intention that it would rise in value and serve as a good investment, which was the ultimate result,” said Jodi Selvey, a Colliers principal. “A decade later, we were able to continue our relationship with the client to secure the best-selling price and act quickly during the pandemic to overcome unforeseen challenges. We look forward to continuing our relationship with BBBSMA and to support such an important cause.”

BBBSMA’s mission is to create and support one-to-one mentoring relationships that ignite the power and promise of youth. As the agency strives to serve the children who are farthest from opportunity, proceeds from the building sale and a capacity-building fundraising campaign will allow BBBSMA to better meet the changing needs of metro Atlanta.

“We are utilizing funds from the sale of the building to ensure the long-term financial stability of the agency, while also investing in specific projects that will allow the agency to innovate and grow,” said Randy Tanner, BBBSMA’s chair. “Ultimately, these changes will allow us to serve more children while also being more responsive to the changing needs of the community.” 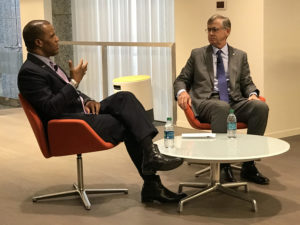 The partnership between Truist and Operation HOPE is getting stronger.

Both entities recently announced an expanded multiyear “transformational” partnership, which will include a series of collaborative programs such as HOPE Inside coaching, digital access that connects to education and Truist solutions, and HOPE’s 1 Million Black Business Initiative as part of the bank’s commitment to bring access and solutions to build better lives and communities.

Charlotte-based Truist Financial Corp. will invest $20 million in the four-year partnership, which will expand and transform HOPE Inside services, financial coaching, educational content and solutions to 1,000 Truist branches.

The expanded partnership also supports Operation HOPE’s work toward launching 1 million Black-owned businesses by 2030. Truist is accelerating the program by offering small business solutions, along with in-kind support and a capacity-building investment.

“I am honored by Truist’s commitment and support of Operation HOPE’s mission to bring financial literacy to all and help aspiring Black entrepreneurs launch the businesses of their dreams,” said John Hope Bryant, Operation HOPE’s founder and CEO. “The leading voices behind SunTrust and BB&T believed in our mission before their historic merger, and we’re thrilled by their continued support via Truist as we work together over the next four years to build and strengthen communities through financial literacy and empowerment.”

Before their merger in 2019, SunTrust and BB&T were both long-standing partners of Operation HOPE. In 2013, SunTrust became Operation Hope’s first financial partner. With the new partnership agreement, Truist also will serve as the lead sponsor of the annual HOPE Global Forums. 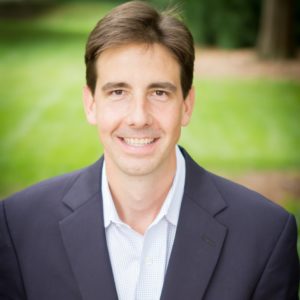 Dustin Heizer has 20+ years of experience working with the natural and built environment.

The Institute for Georgia Environmental Leadership has named Dustin Heizer as the organization’s first executive director.

In his new position, Heizer will continue to build a network of environmentalists and out-of-the-box thinkers to discuss critical environmental issues facing the region.