About this time 23 years ago, a lot of the rest of the world was finding out about this Athens band called R.E.M. The One I Love, a single from Document, broke into the top of the U.S. and U.K. charts around Thanksgiving 1987.

Also, it’s still election season, which includes the runoffs for Georgia’s two U.S. Senate seats. If you’re not registered to vote, you can register at the state of Georgia’s website (or use the instructions to register by mail.)

Registered folks who want to vote by mail in the Jan. 5 election can request an absentee ballot via web, fax, mail or in person.

Despite the coronavirus pandemic, the Covenant House decided to hold its 9th annual “Executive Sleep Out for the Homeless” in person this year.

On the night of Nov. 19, more than 70 executives attended the “Sleep Out,” which was held at the Home Depot Backyard next to the Mercedes-Benz Stadium this year to provide for greater social distancing. 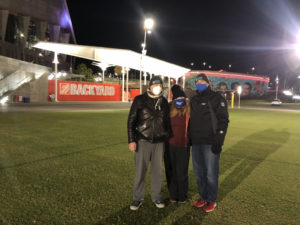 The funds go towards supporting the Covenant House’s mission of providing shelter and support services to homeless youth in metro Atlanta.

“We were blown away by the results,” said Ben Deutsch, board chair of the Covenant House and a retired Coca-Cola executive. “There was lots of consternation about even doing it during COVID, but we put the right safety protocols in place with the help of Leadership Atlanta alums; and the fact that it is was an outside event helped. It was pretty cool doing it outside the stadium, but it sure lost its intimacy with our social distanced spacing. I’m so glad we forged ahead with it.”

The corporate sponsors for the “Sleep Out” were: Global Payments, Wells Fargo, Arthur M. Blank Family Foundation, Jack and Anne Glenn Foundation, BBDO, Envistacom and Green for Life Environmental. There also were several “Sleep Out” teams, including Accenture, BlackRock, CBRE and the Misfits, who raised $210,141.

The co-chairs of the 2020 “Sleep Out” were husband and wife team – David Lewis and Danica Kombol along with David Lanier of CBRE.

The executives braved near freezing temperatures during the “Sleep Out,” giving them one night to experience the discomforts that homeless youth face day in and day out – estimated to be more that 3,300 in metro Atlanta on any given night. The Covenant House served more than 1,800 youth last year through outreach, residential and supportive services.

By the way, it was quite a week for David Lewis. In addition to co-chairing the 2020 “Sleep Out,” David Lewis Productions premiered its Mercedes-Benz Stadium documentary: “Rising Up: A Westside Story” on Georgia Public Broadcasting on Nov. 23. 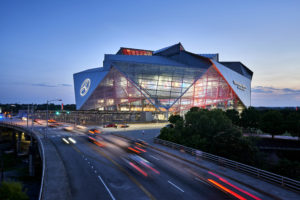 The documentary was commissioned by Arthur Blank, chairman of the Blank Family of Businesses, to cover the building of the stadium and its impact on the adjacent communities, including Vine City and English Avenue.

In 2014, Blank said he had a dual goal of building an iconic home for the Atlanta Falcons and helping renovate the surrounding neighborhoods. The documentary highlights the fiscal and construction challenges during the build, as well as the challenges and opposition the organization faced by some in the surrounding Atlanta communities.

“David and his team have done a wonderful job capturing the entire journey in this film, including the inevitable challenges you face on a project like this,” Blank said in a statement. “More importantly, I think the film shines needed light on how partnerships between business, government, community and ordinary citizens can make tangible, positive impacts on generational problems. It also clearly illustrates that there is still much more to do, and the stadium and our organization will play a role in that for years to come.” 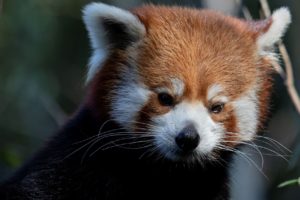 The Washington, D.C. Smithsonian Zoo transplant gets the whole place to himself — red pandas are a solitary species, explains a press release from Zoo Atlanta.

“Jackie will get a chance to explore the red panda habitat, which has been especially retrofitted for his species, on his own terms. As he is still exploring his new environment, there is not yet a guarantee of seeing him,” it says.

Back in April, the zoo’s previous red panda, Idgie, died at the geriatric age of nearly 14.

The zoo is still open every day except Thanksgiving and Christmas, but it’s limiting visitors by timed ticket due to COVID-19.

Previous Article
Emory Healthcare Veterans Program celebrates five years, extends treatment to veterans across 13 states
Next Article
Here is where you can watch the recount in Fulton County