Josh Gibson was born in Buena Vista on Dec. 21, 1911 and spent much of his baseball career in Pittsburgh and Washington, D.C.

MLB historians haven’t yet rewritten the books with the new records, and Negro Leagues seasons were typically shorter than those of the white leagues of the time, which complicates comparison among them. But adding in the slugger’s stats may put him at the top of the single-season batting average list.

On to metro Atlanta news this week:

In a set of unanimous votes Thursday morning, Atlanta’s development authority board members OK’d some public support to jump-start new development around Greenbriar. 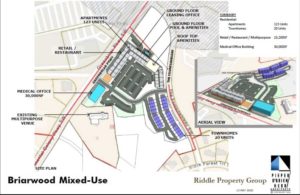 The site plan of the Briarwood mixed-use development at Greenbriar. (Credit: special to IA)

Atlanta Mayor Keisha Lance Bottoms, a member of the IA board, thanked developer Jeff Riddle of Riddle Property Group, which is working on Briarwood.

“It has been a Herculean task to get interest and development in this area and I appreciate Jeff really being focused for all the right reasons, and making sure that this community gets its due share of what’s sorely needed in the area,” Bottoms said.

And the former Magic Johnson Theatre site is set to become housing by 2022: some 484 new affordable units, about half of them set aside for seniors. Projected rents will be as low as $625 on the smallest units or as much as $1,260 on the largest ones. Below-market-rate prices will be in effect for 15 to 30 years. (Senior and non-senior details here)

The local support that the city board approved comes in a couple of ways.

The IA board voted approval of a property tax break for the medical and retail space worth about $635,000 over ten years. That part of the development will also get a $1.2 million grant from the area’s “tax allocation district:” a special zone where a portion of area property taxes are used to help pay for more new development.

The city will help finance the housing via tax-exempt loans — which is a pretty common way for local governments including Atlanta to help finance below-market-rate housing. The state and the federal government also provide tax credits. The Greenbriar housing is being developed by Dominium Development & Acquisitions ad the Beverly J. Searles Foundation.

It is imperative for Georgia women to vote in the January run-off elections for two U.S. Senate seats.

That was the message during the YWCA of Greater Atlanta’s “Conversation with Georgia Women” program on Dec. 15. 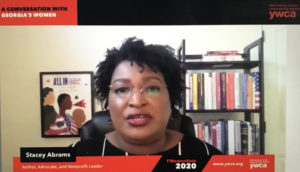 Careful to sidestep any partisan messaging, top women throughout the state repeated the message: Go Vote.

Stacey Abrams, a former gubernatorial candidate who has been leading efforts for greater voter turnout and engagement, said voting is the best way to “build an economy that includes everyone.”

Early voting currently is underway for the Jan. 5 runoff elections.

“We have got to make our voices heard,” Abrams said. “We have the right to protest at the ballot box.”

The town hall event also explored issues that are most important to women based on a YWCA USA survey. The survey found that women across the country agree that prioritizing health care, childcare, ending racial and gender discrimination and economic security – including further COVID relief – should be top priorities for elected officials at all levels of government.

The U.S. House earlier this month honored former first lady Rosalynn Carter’s 50 years of work on behalf of those affected by mental health disorders and substance use disorders.

The House approved a resolution that highlights her work as far back as Jimmy Carter’s presidency, when she was the active honorary chair of the President’s Commission on Mental Health. It continues through her ongoing work leading The Carter Center’s Mental Health Program.

The Lion Bridge and the Erskine Fountain at Grant Park are ready for the spotlight again, after craftspeople repaired the scars of more than a century of deterioration.

The Lion Bridge dates to about 1890 and started life as a carriage and pedestrian entrance to the park.

Erskine Fountain started life on Peachtree Street in 1896 and moved to the then-suburban Grant Park in 1912. It’s a monument to John Erskine, a federal judge. But water hasn’t run in it for decades. Restoration work included a complete restoration of the bronze casting plus the surrounding marble bench and hardscape.

The Grant Park Conservancy organized the restorations and raised the $230,000 for the work. Park Pride donated $100,000 and Friends of Erskine contributed $40,000.

Instead of a traditional ribbon-cutting ceremony, the Conservation is inviting folks on to take a self-guided, socially distant Solstice Stroll on Dec. 20, when the monuments the and Milledge Fountain will be lit by candlelight from 6 p.m. to 9 p.m. 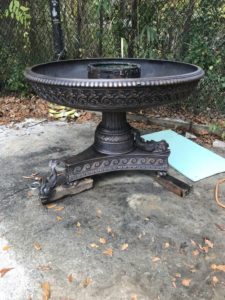 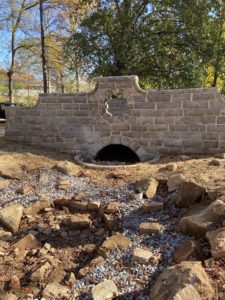 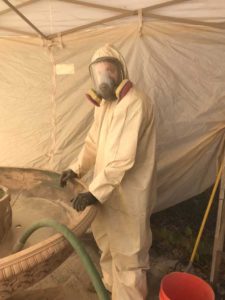