The Atlanta airport saw 43 million travelers in 2020, compared to 110.5 million the year before. But with more people receiving the COVID-19 vaccine, Hartsfield-Jackson could soon reclaim its title.

On to other news around the city:

President Joe Biden and First Lady Jill marked 100 days in office with a pilgrimage to visit Jimmy and Rosalynn Carter in Plains, and a “Back on Track” drive-in rally in Duluth.

The first couple is also celebrating 200 million COVID-19 vaccines in arms. In a press conference, Biden added that 80% of Americans over the age of 65 have received at least one dose.

Biden is also promoting $2.3 trillion infrastructure plan, which would signal a shift to green energy.

“I’m convinced that if we act now, in 50 years, people are going to look back and say this is the moment when America won the future,” he said of the plan. 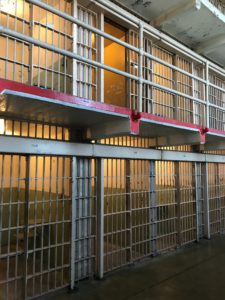 One of the inmates released is a murder suspect who is now back in jail. (Credit: Unsplash)

Big-time Atlanta rappers bond six out of Rice Street, including one who wasn’t eligible

During a press conference, Young Thug said that the pair freed about 30 inmates, which turns out to be untrue.

Their label, YSL Records, painted it as a random act of kindness for folks locked up for low-level charges only because they couldn’t make bail.

But at least one of the six was booked on a murder charge and shouldn’t have been eligible for bond, George Chidi at The Atlanta Objective reports. Chidi also uncovered that the rappers showed up to the jail with a list of specific inmates that they wanted to bail out.

A movement: Students against Sonny

A coalition of students in the University System of Georgia has banded together to petition against the appointment of Sonny Perdue as USG Chancellor.

In March, the Atlanta Journal-Constitution reported that the former Georgia governor and President Trump’s agriculture secretary was a serious contender for the position.

The petition, “Protecting the Future of Georgia Higher Ed,” points out that Perdue hasn’t worked in higher education, making him underqualified for the position and “a proven threat to higher education in our state.”

While Purdue was governor, Chancellor Erroll Davis pushed for tuition increases, leading to a tuition increase of more than two-thirds at the University of Georgia and Georgia Tech between 2008 and 2013, according to the AJC.

So far, over 1,300 people have signed the petition, with one person writing, “[Perdue] would place politics and profits as priorities over sound educational practices.”

The United Campus Workers of Georgia signaled their support, tweeting, “The University System of Georgia needs a proponent of affordable and accessible education at its head.”

The petition closes out with their demands, as listed: No Sonny Perdue, transparency, experience, student values and voices.

We support the Students Against Sonny Coalition & their petition: Protecting the Future of Georgia Higher Ed. The University System of Georgia needs a proponent of affordable & accessible education at its head. UCWGA advocates for a spirit of cooperation and openness. #education pic.twitter.com/9JFV7AO3d7 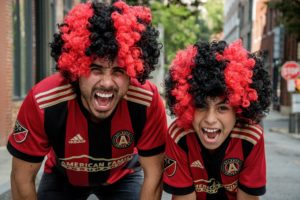 By mid-May, sports fans will be able to fill the stands in person.

The Mercedes-Benz Stadium and Truist Park are set to reopen to 100% capacity.

The Atlanta Braves are the first MLB team to remove attendance restrictions, according to CBS Sports, with other stadiums maintaining a 20% to 45% capacity.

Soccer, baseball and football fans alike, donned in masks, will be able to cheer on their favorite players and watch the game in real-time, rather than in the glow of blue light.

Visitors will be required to wear masks besides when eating or drinking. 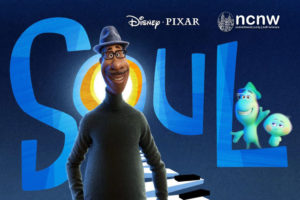 Former President of Spelman Johnnetta Cole was recognized for her role in the film “Soul,” which received Best Animated Picture at the Oscars. (Credit: NCNW, Inc.)

Atlanta shows up to Oscars night

On the Oscars night, filmmaker and actor Tyler Perry was given the Jean Hersholt Humanitarian Award for how he’s stepped up for the community through the pandemic.

He footed the grocery bill for senior shoppers across 73 stores in Atlanta and Louisiana. He paid for Rayshard Brooks’ funeral last summer and offered to pay for his four children’s college expenses.

Perry said his mother ingrained in him a refusal to hate, and added that social media and the 24-hour news cycle play into judgment and hate.

“Stand in the middle because that’s where healing happens,” Perry said during his speech. “So anyone who wants to meet me in the middle, to refuse hate, to refuse blanket judgment, and to help lift someone’s feet off the ground, this one is for you too.”

Perry wasn’t the only one with Atlanta ties who was recognized at the Oscars. Johnnetta Cole, former president of Spelman College, worked as a cultural consultant for Pixar’s “Soul.”

The movie won Best Animated Picture, and Cole received a shoutout during the acceptance speech. Cole, chair and president of the National Council of Negro Women, worked to “[keep] those characters truthful.”

👏 @tylerperry paid it forward and purchased groceries for nearly 3,000 senior shoppers today at Kroger stores across Atlanta. You can see how much this means by the look on their faces. Thank you, Tyler, for your generosity! 💙 pic.twitter.com/L57nfNqm3g 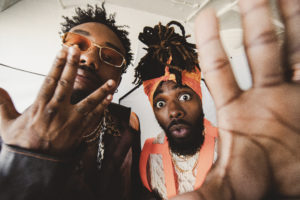 “I know growing up, it was hard to find the right food sources,” Johnny Venus of EarthGang said at the garden’s debut. “To be able to see how it happens and to be in control of [your food] is something I appreciate and definitely want to bring forward.” (Credit: EarthGang)

EarthGang with an Earth Day mission

In 2014, after a community member lost her home to fire, she donated her 1.4 acres of land to the school, which will be converted into a community garden.

On Earth Day, EarthGang presented the school with a $10,000 check. The science class curriculum will now include a trip outside with a pair of gardening gloves.

Students will learn about the importance of a sustainable environment and can walk away with fresh food for their plates.

EarthGang was inspired to donate their time and resources to the middle school because a 2019 student survey showed that the students noted food insecurity as one of the biggest barriers to their success.

“Sustainable living grows more important with each new generation,” WowGr8 of EarthGang said. “Promoting agriculture to youth is essential for changing the scope of what our community considers acceptable nourishment.”

The community has raised $15,000 through its GoFundMe to support the garden.