The delegates from the Democratic roll call appear on the left, and the Republican roll call is on the right. Credit: cspan via twitter.com
Share17
Tweet
Share
Pin
Pocket
WhatsApp
Buffer5
Email
Reddit
22 Shares

Republican planners said last week that their convention would be nothing like the celeb-studded, zoomed-in production of the Democrats. They made good on that first thing Monday morning, with a nomination vote which could not have been farther from the Democrats’ rainbow-nation, virtual roll-call vote for Joe Biden last week. 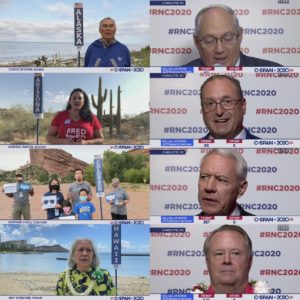 The delegates from the Democratic roll call appear on the left, and the Republican roll call is on the right. Credit: cspan via twitter.com

The Republican version was an almost entirely monochromatic procession of party and elected officials standing in front of the same convention-logo backdrop. It was not a carefully staged primetime production, like the Democrats, but it did feature an unannounced appearance by President Trump, making the first of what will be several speeches this week.

Exactly what it means to be “there” in a time of pandemic is a question that floats philosophically over this year’s presidential campaign. The Trump campaign chided the Democrats for not having their formal nomination in Milwaukee. So they made it a point to have a few hundred Republicans, six delegates from each state, come to Charlotte — the convention city Trump walked away from a few months ago — to sit in the Richardson Ballroom of the Charlotte Convention Center at six-foot tables and be “there” for the vote. They were heard, but not seen, as the convention secretary went down the roll of the states.

Trump’s speech after the roll call was twice as long as Biden’s prime-time speech, plus everything else he said during the Democratic National Convention last week. His select audience loved it. And it was clear the president was just getting warmed up.

We’ll be seeing lots of Trump this week, and other people named Trump, and people praising Trump. What isn’t clear is what’s going to be said about the rest of the Republican Party.

With early voting set to begin soon, the GOP’s hold on the U.S. Senate and with it control over the nomination of federal judges, is in doubt. With incumbents in trouble in North Carolina, Colorado and other states, Senate Majority Leader Mitch McConnell at first announced he would have no speaking role at the convention, then reversed himself last week and said he will be taping some remarks.

When the Democrats took the House majority in 2018, regaining it in 2020 seemed possible for the Republicans. Increasingly, it doesn’t. Some of Trump’s most vocal House supporters are scheduled to speak, as well as Madison Cawthorn, the young Republican who won a primary battle with a Trump-backed candidate to represent the party in White House chief of staff Mark Meadows’ old seat. But you aren’t likely to hear as much about their own races as the president’s.

Before the 2016 election, the Republicans controlled 68 state legislative chambers around the country. Now they hold 58. The Republican speaker of the house in Ohio has been indicted in a massive bribery case, and the Cook Report has changed its legislative ratings in several states in the direction of the Democrats. You’re sure not to hear anything about those races this week.

The Republican National Committee decided over the weekend that it would forego having a platform, other than strong support for Trump and his administration. Maybe that’s okay for the national campaign, given the circumstances of the pandemic. But what about the candidate who’s running for county commissioner or state rep? How do they define themselves as Republicans?

In contrast to the Democrats last week, only one Georgian was on the advance list of this week’s convention speakers — and he’s a Democrat. State Rep. Vernon Jones, who endorsed Trump earlier this year, was scheduled to speak on Monday night. (Another Georgian, not on the early list, was football great Herschel Walker, who also spoke Monday night.)

When Trump was finished with his speech Monday, he and Vice President Pence waved the crowd, “YMCA” blared in the background, and this sort-of-real, sort-of-virtual convention moved on, mostly to Washington. Trump plans to give his big speech before a conventional audience Thursday night from the South Lawn of the White House. The National Park Service gave its approval Monday to a permit for a fireworks display over the Washington Monument.

Nothing highlights being “there” like a rousing fireworks display, and you can see why Trump wanted one for a finish. The question is how much of the U.S. electorate is going to feel like they’re there with him.