The “use of force” regulations that govern Atlanta police remain under active review almost six months after George Floyd died while in a choke hold in Minneapolis. Plans in Minneapolis for a “defund the police” policy have collapsed. 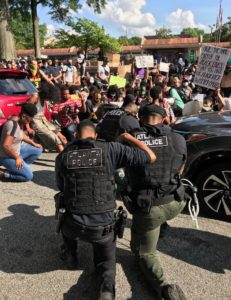 Atlanta’s regulations that intend to regulate police ‘use of force’ are under review at Atlanta City Hall. File/Credit: Kelly Jordan

In Atlanta, Sept. 14 is the date of the most recent version of the Atlanta’s use of force policy. Interim Police Chief Rodney Bryant signed the new standard operating procedure. It replaces a policy signed Nov. 5, 2018 by former Police Chief Erika Shields.

Shields resigned after the fatal police shooting on June 14 of Rayshard Brooks, shot while reportedly fleeing police with a Taser he’d taken from an officer.

APD’s new policy does not appear to change the rule regarding the use of force that can be viewed as “reasonable,” including situations where, “the subject actively resisted or attempted to flee,” or would, “create a continuing danger of serious physical harm to any person,” as described in another city document. However, this area is under specific review that is expected to result in, “additional safeguards and restrictions on the most severe type of force that an officer can use.”

In Minneapolis, efforts have stalled for what had been lifted up as a national example of the “defund the police” movement. The idea is to redirect taxpayer funding from police department to social services and other programs, as described in a June report by Brookings. The Minneapolis effort stalled for an array of reasons that have been widely reported, including a Sept. 26 piece in nytimes.com that observed in a headline:

Atlanta has not yet suffered that fate.

Now, the Atlanta City Council is poised to get involved with establishing use of force regulations. The council wants to join in the deliberation of recommendations from the Use of Force Advisory Council, established June 4 by Mayor Keisha Lance Bottoms. Several recommendations have already been implemented.

The council on Oct. 19 is slated to approve a non-binding resolution to join in revising APD’s Policy Manual. The first such meeting is to be scheduled this year. The council and its staff is scheduled to conclude its work for the year during the week of Dec. 14, when it begins a winter break that’s to last until Jan. 4. 2021.

The administration supports the joint effort to review the policy, according to a presentation by Jerome Jordan, the mayor’s deputy chief of staff. Jordan and members of the council’s Public Safety Commission discussed the collaboration Monday.

Jordan said the administration would coordinate with Sheperd and her staff to set a date for a work session, “And be ready to answer questions at that time.”