Richard Stogner honored for public service, as he calls for more regional cooperation

The shapers of Atlanta gathered Sunday evening at the Callanwolde Fine Arts Center to honor one of their own — Richard Stogner.

As a video screen played scenes from Stogner’s life, we all received slices of Atlanta history from the officials who were on the front row of government during the city’s growth from a metro area of less than 1 million residents to a region of more than 5 million people. 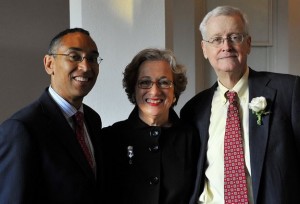 The evening was humorously emceed by Angelo Fuster, who worked in communications for several city administrations. Leadership DeKalb, working with a steering committee of community volunteers, organized the event. Contributions will benefit the USO Georgia chapter, where Stogner has served on the board for 20 years.

Lessons were shared of then and now — how leadership has changed and how we have lost part of the intergovernmental relationships forged by these builders of Atlanta history.

“There were five or six of us,” said Sam Brownlee, former Fulton County manager. “We liked one another. We socialized with one another. I don’t know that that happens today.”

Sweat told them “to make sure we styaed on good terms with each other even when the people we worked for were not on good terms,” Brownlee added.

Among the public servants that created the safety web across political borders were Stogner, and his twin brother James Stogner; Brownlee; George Berry, who worked for former Atlanta mayors Ivan Allen Jr., Sam Massell, Maynard Jackson and Andy Young; and Sam Williams, who was a protégé of Berry and Stogner and is now president of the Metro Atlanta Chamber.

Berry described Stogner and other leaders in the room as being among “class of people who devoted themselves to the public,” people who could have made millions of dollars had they gone into the private sector but chose instead to dedicate their careers to the public good.

“We came along in the sixties with a lot of people who were eager to make a better world,” Berry said. “They were fighting against the war, a valid thing to do. There was a group that said we can work inside the system. Richard was at the forefront of all of that. Richard went to bat for the most progressive things that could be done.”

Former Atlanta Mayor Sam Massell described them as “the real pros that can make the top guy look good as they stood behind the curtain.”

After leaving City Hall, Stogner joined Fulton County to head its office of economic development. He then went to work for the Atlanta Committee for the Olympic Games in the finance area where he closed out the books.

And finally, the late Manuel Maloof, former CEO of DeKalb County, introduced Stogner and Brownlee to his new young friend Vernon Jones, then running for CEO.

One of the running themes of the night wa how Stogner could bring together people of opposing views. That was obvious Sunday night when both Jones and his successor, Burrell Ellis, both showed up to pay their respects to Stogner.

“I had the good fortune of coming into county government at just the right time,” Ellis said how he joined the DeKalb Commission at the same time Stogner began working at the county.

“He had an open door policy,” Ellis said. “I know that because I could smell the smoke coming out of his office.” Stogner had been a smoker. Then Ellis reminded attendees that he had sponsored a successful bill to make the public facilities in DeKalb smokefree.

Then Ellis remembered when he won the election to be DeKalb’s CEO but had not yet taken office.

“I went to visit my friend Vernon, and he kicked me out of his office,” Ellis said. “Richard came running after me telling me to put it in perspective. ‘You’ve been here eight years, and this is just the first time you’re bing kicked out of his office.’”

Then Jones got his turn at the podium and a chance to zing Ellis.

He said that Stogner called him up and said: “Boss, I would rather be kicked out of your office. Burrell kicked me out of the government.”

Another running theme was that these public officials knew how to run government and keep the finances in order.

“One good thing, most of us could count,” Brownlee said. “There’s little regard for that today.”

Pat Glisson, who worked with Stogner at City Hall and at the Olympics, described the group of public servants as having gone to the “Charlie Davis of local government.” Davis was the longtime chief financial officer for Atlanta, who in his day was the most powerful leader in the city other than the mayor.

And then it was Stogner’s turn, who admittedly was uncomfortable with all the attention. Yet he remembered the high points of working for Davis, Massell, Berry and others.

As individuals, they may not have done that much. But as a group “we’ve had a lot to do with the shaping of Atlanta.”

Stogner said there was “something special about Atlanta;” how in the 1960s, the city took a progressive approach to integration, unlike most other Southern cities. He said the city that had been burned down by General Sherman in the Civil War had emerged as a business town determined to promote itself as a city of the future.

“Sometimes I think we need to go back to that,” Stogner said. “Sometimes we get too fragmented. The last great unifying thrust was the Olympics. And then everybody went off in their own direction.”

Now the governments of the city of Atlanta, Fulton and DeKalb counties as well as all the other towns and counties in the region are having trouble cooperating on regional issues such as transportation, solid waste and water.

“There are more and more challenges with balkanization,” Stogner said. “It is more and more difficult to achieve regional solutions.”

Those are the words of a public servant who has seen it all. He belonged to a special group of other public servants who managed to find solutions by crossing over political lines.

He’s right, the problems of our region have become more complex. And without the close-knit relationships between our top government officials, it will be all the more difficult to find lasting solutions.