By Maria Saporta
As published in the Atlanta Business Chronicle on March 18, 2016

After a decade as CEO of Equifax, Rick Smith has turned the credit reporting company into an information technology powerhouse operating in 27 countries around the world.

It’s a transformation easily overlooked by the general consumer, who still connects Equifax with credit scores and credit information.

But in the business-to-business world, Equifax is becoming recognized as a one-of-a-kind technology firm that can compile, analyze and fuse multiple databases so that other companies can better understand their customers as well as strategically identify prospective customers.

Smith, who sat down with Atlanta Business Chronicle for a lengthy interview, reflected on the change that has occurred under his watch. When he became CEO in September 2005, Smith estimates that 80 percent of the company’s revenues came from its credit reports.

Today, he estimated that the credit now accounts for about half of Equifax’s revenues, and that percentage is continuing to drop.

“We made a determination 10 years ago that the future of underwriting risk would no longer be the same,” Smith said.

So that’s when Smith began acquiring and building other sources of data than relying just on credit reports. 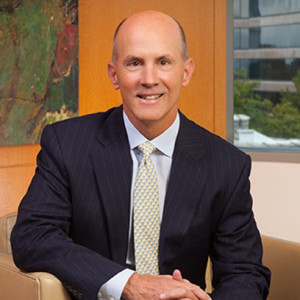 “I bought a company nine years ago that collects employment and income data with 15 different attributes,” Smith said. “I also built a company that has property data — 14 trillion pieces of wealth data.”

In many ways, the new Equifax bears little resemblance to the company that was founded 117 years ago as the Retail Credit Corp.

“When I came here, I inherited a company with a great history, a great reputation and a big moat,” Smith said. “People had this attitude of entitlement. We were a culture of tenure versus a culture of merit. It was a slow growth company.

“As I look back to the change over the last 10 years, there has been cultural change, innovation and growth with world-class talent. There are very few companies that have as much information as we do.”

“We aggregate massive amounts of unique data in 27 different countries. We collect massive amounts of data,” he said. “Second, we have a huge number of PhDs and master’s degrees who build mathematical algorithms to determine future behaviors.

“And the third thing we do is we are a software company,” Smith continued. “We build software that we sell to our customers. They access the algorithm and the data. We have the ability, which is pretty unique, to take unstructured data, and combine it.”

The company also is able to monitor tweets and Internet data for customers to find out different patterns of consumer behavior.

“We have got massive amounts of data on different databases,” he said. “We have built the technology that can get those databases together in seconds.”

While the general consumer may not be aware of how Equifax has changed, investors have noticed. The company’s stock (NYSE: EFX) has significantly outperformed the market. And the company shows no signs of slowing down, expecting to grow 7 to 10 percent a year over the next several years.

“It is a fabulous team driven by innovation and high growth,” Smith said. “We generate 60 to 75 new products every year, and roughly three points of our growth comes from products that didn’t exist three years ago.”

“This is a place where the best and the brightest want to come,” said Smith, sitting in his Peachtree Street office overlooking downtown and Midtown. “It was an old stodgy company. Now we can get anyone we want to get.”

Smith joined Equifax after a career with General Electric, where he was running a business unit much bigger than Equifax. He decided to come to Atlanta because he connected with the board, and he saw the opportunity to “rebrand an old company” and position it for greater relevance in the new economy.

“Running this company is a lot of fun,” Smith said. “I work with people I love. The civic stuff is rewarding. The real benefit to me is to help the community. Atlanta has been wonderful to me personally and for my family and the company. Our ability to attract people into Equifax was greatly helped by my outside activities.”

Smith, who turned 56 last Halloween, has been reflecting on how far the company has come and what’s next for Equifax. And where he wants to focus his energies while he’s still at the helm.

“It’s not the money or the financial rewards. It’s not the stock price. It’s not that the company has doubled or tripled in revenue. Those are metrics,” Smith said. “The most rewarding thing in my 10.5 years has been to see talent flourish. There’s probably not a company in this town that this team couldn’t run.”

Smith said he has told his board that the company should reach $4 billion in sales in the next couple of years.

“The next five to 10 years are going to fly by,” said Smith, “What’s next tomorrow? We want to do things where you transform the company in a way that doesn’t put the company at risk. Our core business is so solid. If I had to paint a picture of what I want Equifax to be [it would be] a global powerhouse in fraud prevention and identity management; being a leader in analytical insights across any sector – insurance, health; a global player in income and employment verification.”

But Smith did not want to put any specifics about how long he’ll stay as the company’s CEO.

“I started very young as a CEO. At some point in time, the company deserves new thinking. We have people here who deserve my job.

“This is my 11th year as a public company CEO,” said Smith, knowing he’s already beaten the odds for the tenure of the average CEO. “As long as we don’t get complacent and continue to push innovation, the future for the next 10 years is so bright.”

Smith, however, made it clear that if and when he leaves Equifax, he doesn’t plan to retire. He is spending a great deal of his time thinking about the world we live in.

“Philosophically there’s no doubt that there’s an opportunity gap in this country,” said Smith, who believes there should be more focus on technical education. “We have demonized vocational jobs in this country. We have created a void in our country technologically.”

Smith, who serves on the board of Operation Hope — which is fighting poverty through greater financial literacy, is looking at ways Equifax can better serve the “unbanked” — people who have no credit history, but who pay their utility bills on time every month. And yes, Equifax has a database that tracks that.

“Equifax is an advocate for those who are underserved,” Smith said. “There are 25 million to 30 million people in the United States who pay off utility bills but do not have a credit file. We now get them to have access to credit education and building a credit base.”

“If you make $50,000 a year, you are in the top 1 percent in the world. Our impoverished are comparable to the middle class in other parts of the world,” Smith said. “We are a blessed country.”

And yet Smith said he is always mindful that Atlanta is home base for Equifax.

“If I had a wish for this company it would be that it’s better known in the community,” said Smith, who is proud of the Equifax he has helped transform. “I’ve really enjoyed these 10 and a half years here. I’m proud of the team — they’re the best. Our best days as a company are ahead of us.”