Two months into calving season, a heavily entangled North Atlantic right whale has been spotted off the coast of North Carolina — devastating news for the critically endangered species.

The whale has several wraps of line around her mouth and tail, with additional line trailing behind. According to NOAA Fisheries biologists, the entanglement is considered a “serious injury,” meaning she will likely die. She wasn’t yet entangled at her last known sighting in May 2022 in Massachusetts Bay. 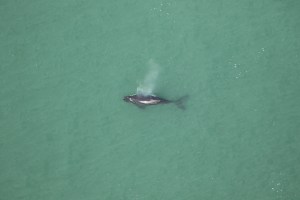 In addition to the critical condition of right whale #4904, a deceased male calf was found near Morehead City, North Carolina on Jan. 7. This calf was seen alive on Jan. 3, swimming alone at only a few weeks old. Typically, calves will nurse for a year or two and remain close to their mothers until around age 10. The CMA aerial survey team searched for a potential mother but no other right whales were found.

As their numbers continue to decline, the future of these whales is in question. The species has been designated as endangered at various levels since 1970 and in 2017, NOAA classified the situation as an “Unusual Mortality Event.”

Additionally, a recent report shows that the species’ population — already dangerously low with approximately 340 whales — declined by 2.3 percent in the last year. Around 70 to 80 breeding females remain.

“It’s discouraging and frustrating to see yet another North Atlantic right whale entangled in fishing gear,” Gib Brogan, head of Oceana’s nationwide right whale campaign, wrote in a press release. “We know that fishing gear entanglements are a top threat to this critically endangered species, and this entanglement is the result of continued mismanagement of this risk.”

Brogan continued: “Because this species is so depleted, even a single entanglement is tragic.”

As the right whales swim around the Southeastern coast for the calving season — spanning from now until mid-May — NOAA urges boaters to be aware of their surroundings and report any stranded or injured whales. Activists are also calling for change, and fast.

“Every time we have a right whale killed by human causes, it sets back the recovery of the species,” Brogan told SaportaReport in a previous recent interview. “That’s more than one year’s allowable death. The whale population will continue to decline unless we put effective safeguards in place.”

Click here to read more about the status of the North Atlantic right whales and efforts to protect the critically endangered species.