This time of year, a group of expecting mothers make their migratory trek from the coast of New England and Canada to the warm waters of Georgia, South Carolina and Florida. Here, during the fall months, North Atlantic right whales birth and nurse their young before making the northward journey in the spring.

Along the East Coast, the aquatic mammals face two major, human-induced threats — collisions with ships and fishing gear entanglement. And the impact of these threats is astounding. According to the new 2022 report from the North Atlantic Right Whale Consortium (NARWC), the critically endangered population has dropped 2.3 percent in the last year.

In 2021, there were an estimated 340 whales, eight less than the previous year. Roughly 80 breeding females remain.

NARWC, co-founded in 1986 by the New England Aquarium and partners, is a network of members, organizations and government agencies that are active in right whale conservation efforts. Each October, NARWC releases a preview of its annual report card, and on Oct. 25 and 26, members gathered to discuss the new report’s findings.

The bleak numbers aren’t shocking to researchers; however, the statistics do highlight an already alarming situation. The species has been designated as endangered at various levels since 1970 and in 2017, the National Oceanic and Atmospheric Administration (NOAA) Fisheries classified the situation as an “Unusual Mortality Event.”

Humans are the primary cause of the right whales’ decline. According to NOAA, when the cause of death could be determined, all juvenile and adult right whale deaths between 2003 and 2018 were due to human activities — either ship strikes or fishing line entanglement. Eighty-five percent of right whales have been entangled in fishing gear at least once.

In response to the 2022 report, Oceana’s Gib Brogan wrote in a press release: “Every year that passes without meaningful government action is devastating for the survival of North Atlantic right whales. Fisheries, politicians, and the U.S. government need to work together to enact solutions to save this critically endangered species from inching closer to extinction.”

To allow the whales to safely navigate the waters, many scientists and conservation advocates call for increased protections along the coast. 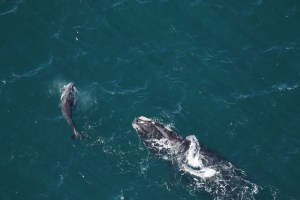 “Half Note” and her calf off the coast of Georgia in January. (Photo taken by Clearwater Marine Aquarium Research Institute
under NOAA permit #20556)

In August, NOAA introduced a proposal to expand protections for the critically endangered North Atlantic right whale. The changes would significantly broaden the boundaries of the current seasonal speed restriction areas, which require boats to go slower in certain areas and increase the number of boats to which the restrictions apply. The proposal is open for public comment until Monday, Oct. 31.

Researchers are also working on ropeless fishing, as outlined in NOAA’s Ropeless Roadmap, which explores ways to develop on-demand fishing without the lines. This technology has been researched predominantly in the Northeast, where the fishing practices with long, vertical lines — like lobster and trout pot fisheries — cause more entrapment issues than in the Southeast.

While a step in the right direction, this issue cannot be quickly resolved. In a previous SaportaReport interview, Southern Environmental Law Center (SELC) Science and Policy Analyst Melissa Edmonds said she was glad to see increased protections, but the team is hopeful for more.

“The increased protections are much needed, and frankly, long overdue,” Edmonds said at the time. “On its face, we’re thrilled to see more protections, stronger protections. But there’s still room for improvement in some smaller areas of the provision.”

One thing is clear: To protect this species, something must be done — fast. Click here for a closer look at the status of the North Atlantic right whale, and here for more on NOAA’s new proposal.