Another significant figure in the history of Atlanta’s civil rights movement, and the state GOP, has passed away – former city alderman and state Rep. Rodney Mims Cook, Sr. 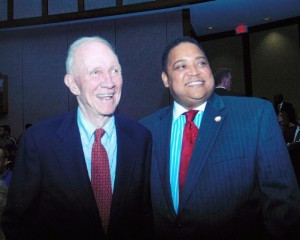 Cook, who died Sunday, is remembered for his work to help struggling communities when he served on the old Board of Aldermen. Cook’s efforts on behalf of civil rights in the state Legislature were noted Tuesday by Atlanta Councilperson Michael Julian Bond, whose father was supported by Cook when state lawmakers barred the elder Bond from taking the seat he had won in Georgia’s House of Representatives.

“My family is forever grateful for Mr. Cook’s bravery and righteous fervor in defense of my father during a very frightening and difficult time,” Bond said in a statement.

Cook also was an architect of Georgia’s Republican Party. He once chaired the state party, and his work helped elect Newt Gingrich to his first seat in Congress as well as craft future party leaders such as Alec Poitevint, who managed the 2012 Republican National Convention and once headed the state ports authority.

Cook also lost two campaigns in elections that would shape the region for decades: The 1969 mayoral race against Sam Massell; and a 1972 congressional race against Andrew Young.

In the Legislature, in 1965, Cook was one of five white representatives who voted to seat Julian Bond. Bond had been duly elected, along with seven other African Americans, and they were denied their seats in the House.

The U.S. Supreme Court ruled in 1966 that the actions of the Georgia House were unconstitutional, and Bond was sworn into office in 1967.

The battle over Bond’s seat followed Cook’s effort in 1962 to organize the demolition of the Peyton Wall, in southwest Atlanta.

The wall was erected at the behest of then Mayor Ivan Allen in order to “to deter African Americans from moving into white neighborhoods in southwest Atlanta,” according to an account in “Atlanta in the Civil Rights Movement,” by the Atlanta Regional Council for Higher Education. The wall was about four feet high and had the effect of impeding moving vans.

In the state House, Cook introduced a resolution calling for the demolition of Peyton Wall. The wall had been torn down within two months on the orders of the mayor, whose action preceded a court order for the wall to be removed.

According to Bond’s statement, Cook, “faced threats and intimidation from white supremacist groups including  threats to bomb his home and kidnap his children.”

“He possessed a type of courage that cannot be taught but from which much can be learned,” Bond said in the statement. “This city is a better place because of Mr. Cook’s effort – and can be made even greater if we follow his example.”

Cook went on to become active in the state’s nascent Republican Party.

According to the history of the party on the state GOP webpage, a history that was written by former Sen. Eric Johnson, Cook was an instrumental figure at crucial moments: