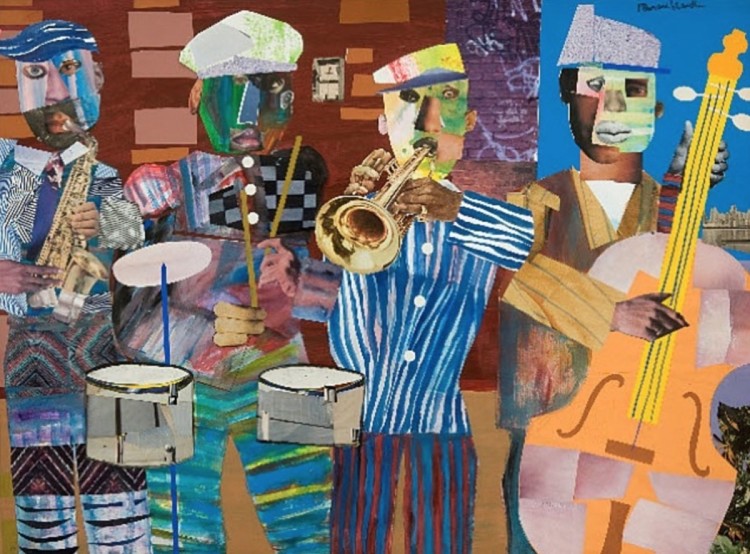 Editor’s note: This story has been updated with information regarding Dr. Mary Schmidt Campbell’s published works on the artist.

Jerry Thomas Jr. and Alan Avery may have engineered Atlanta’s single most significant black art exhibition ever this past weekend. Their unprecedented collaboration produced an historic cultural event for dozens of the city’s Who’s Who art aristocrats to admire and purchase rare original works by Romare Bearden, America’s preeminent African American artist. 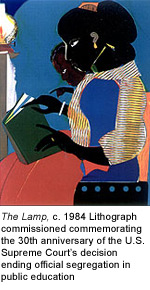 The Lamp, by Romare Bearden

“We are the first two art dealers – regardless of color – that have collaborated,” says Alan Avery, owner of the Alan Avery Art Company in Buckhead. “It doesn’t happen in Atlanta. But, I think it is even more significant that we are from different races and that we come from different backgrounds, but that we are collaborating for the strength of Atlanta, the Atlanta art scene and the Atlanta collector base.”

“Bearden is one of the all-time great artists,” adds Jerry Thomas, the owner and highly regarded impresario of Jerry Thomas Arts. “He would not only enjoy the prices that his works are bringing but also the mixed audience of both blacks and whites. I think that would have been very important to him. What makes it ever more significant is the collaboration between me and Alan Avery. Hopefully this will not only be the beginning of such collaborations, but will set a new mold for the country in terms of blacks and whites working together to produce more shows.”

Bearden’s work now commands a hefty price tag, with the pieces on display at Alan Avery’s gallery ranging from $40,000 to $400,000. It was an uptown show for an upscale cross-section of Atlanta’s elite, and the metro area’s sophisticated art connoisseurs. They didn’t blink at the prices. Six of Bearden’s prize pieces were sold the first day, and the exhibition continues through January.

“One of the things I’m trying to do is put Atlanta on the map as a major art and cultural center,” says Thomas, who is also chairman of the Fulton County Arts Council. “When I was negotiating with the [Bearden] estate to bring these works here they said Atlanta does not have the art market that can support these prices. I said you are absolutely right but if Alan and I join forces we can bring the people who will buy the art and that has been happening. There is little question that this will be a very successful show. We’ve already sold a piece to [recording artist] Usher Raymond and we’ve also sold one of the higher priced pieces for $400,000.” 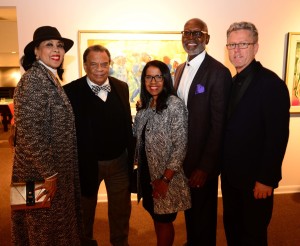 “This black and white collaboration makes for a Kumbaya moment for Atlanta,” says Andrea Young Thomas, Jerry’s wife and Andrew Young’s daughter. “When good things happen in Atlanta, it’s usually because blacks and whites are working together. That’s been the ‘Atlanta Way’ for decades. This is yet another example.”

But what makes Romare Bearden such a magnet for this diverse appreciation by such a mixed race group of collectors? James W. Jackson knows as well as anyone. He is an arts aficionado who owns one of Atlanta’s most prized and extensive collections.

“I collect contemporary 20 century art, the art of Bennie Andrews, Jacob Lawrence, Hale Woodruff, Charles White, Huey Lee Smith, Faith Ringgold and Romare Bearden,” says Jackson, who describes himself as an art collector, curator and entrepreneur. “It’s an extraordinary collection. But not only do we collect it, we built a gallery on our property to showcase our art. We have more African American artwork than anybody in town. We are the only people in Atlanta that have a private art gallery.

“Art is our window to the world, art is a blueprint into ourselves,” he continues. “Romare shows us a world we wouldn’t necessarily envision, but he expands our horizons and we see things differently. He’s up there with Picasso, Rembrandt, and Jackson Pollard. His work is just as fine as any of their pieces.” 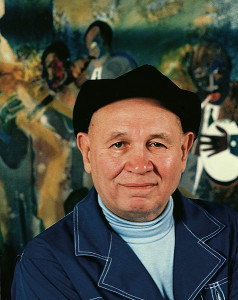 “In terms of his collage work, what he did to collages is comparable to what Picasso did for cubism,” opines Thomas. “What I tell people is if you know the name Picasso you should know the name Bearden because his contribution to art was just as great. Scholars are writing about him.”

Bearden, who died in 1988 at age 76, was no stranger to Atlanta. In fact, he was here often. He came when [artist and educator] Hale Woodruff was at Atlanta University. He would come regularly to visit and stay with [black arts connoisseur and collector] Richard Long.

“Bearden was so political in his art,” says Andrea Young Thomas. “What makes fine art is the meaning and the artists’ expression. Bearden was so intentional in expressing things that are important to the uplift and empowerment of the African American community and telling our story. He lifted up the black family, for example, in a series of paintings that show people sitting around the kitchen table and combing hair; images that reflect us back to ourselves. So to have this in Atlanta is just so powerful.

“Bearden is one of the most important American artists of the 20th century,” she continues. “Every major museum wants his work. So he is a superstar in the arts, and he is intentionally African American. He had as a goal to reflect and represent and honor the lives and experiences of African Americans.

Valarie Jackson, wife of the late Atlanta icon Mayor Maynard Jackson, says that in many ways his name is synonymous with breaking barriers – not just in art – but the whole African diaspora. 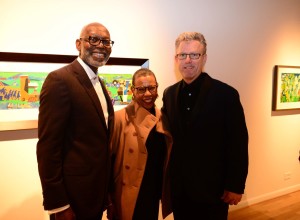 The Romare Bearden exhibition, produced by  Jerry Thomas and Alan Avery, are shown here accompanied by Dr. Mary Schmidt Campbell, president of Spelman College and the co-author or co-editor of several books on the artist.

“I am delighted to see Bearden not only because he is a great artist,” she says. “He also represents an effort in the black community that has survived and struggled and overcome for so many years, and in a way you can see that in his work as it has progressed and changed throughout the years. One piece might be about African heritage, whereas another piece is about nature, and another piece is perhaps about humanity, and then another piece is about the future. So I am impressed by his work, and I want to support the black arts and support what they are standing for. This is not just to have a Bearden; this is also to invest in the black art community.”

Edwin Moses, the world class athlete and humanitarian who won Olympic gold medals in the 400 m hurdles in 1976 and 1984, says this Bearden exhibit legitimizes Atlanta as a first class international arts capital. 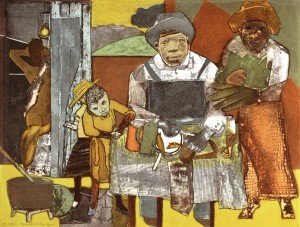 The Family, by Romare Bearden 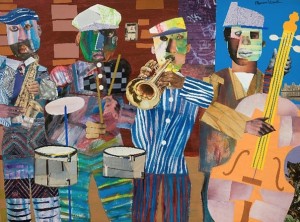