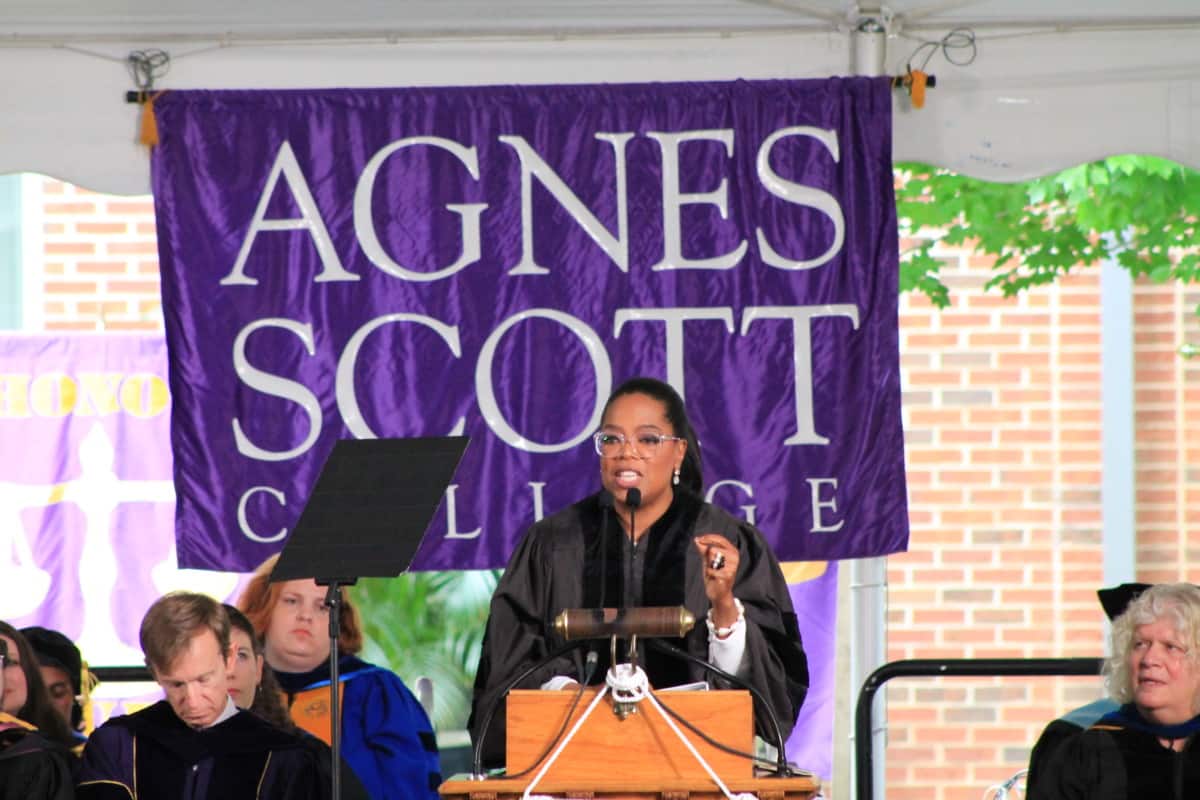 In a soulful and stirring ceremony, Oprah Winfrey delivered the main commencement address for Agnes Scott College in Decatur last Saturday. Those expecting the world-conquering media icon to inspire them with her transcendent, life-affirming message got their wish.

But those hoping (praying?) that the wise and mononymous billionaire guru would offer a glimmer of  hope for a future White House bid were sorely disappointed. 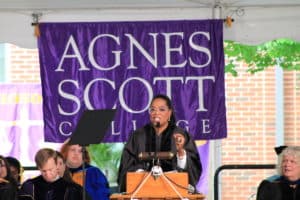 The speech at the Agnes Scott’s 128th Commencement was classic Oprah, swelling with profound reflections about following your passion and living a life of sublime service to humankind. But the Queen of All Media did not — would not — take the bait on a question likely on everyone’s mind: Will she ever run for president?

Before the ceremony began, college president Elizabeth Kiss playfully teed up Winfrey’s POTUS potential, saying “There really is nothing she can’t do. Maybe, just maybe, she’ll run for president,” a line which elicited a roar of approval from the audience.

For now, however, it seems that a “Trump vs. Winfrey” fantasy showdown in the 2020 presidential race will be just that — a fantasy.

After backing Hillary Clinton in the 2016 election, Winfrey has since rejected suggestions that she would run for president or other elective office. During her speech at Agnes Scott, Winfrey only mentioned politics in passing,  recounting a story about bringing a group of liberal and conservative women together for a post-election coffee klatsch in New York.

At first, Winfrey said the group split into their respective political tribes and were  hesitant to interact with each other. But before long, Winfrey had them all noshing croissants and singing Diana Ross standards. And isn’t that exactly what we need right now?

For her diehard fans and spiritual followers, at least, Winfrey’s speech at Agnes Scott had just what the doctor ordered —  and it didn’t hurt that she was also awarded an honorary doctorate by the school.

“This is what happens when you come to Agnes Scott,” Winfrey said in her address. “You leave a more deepened human with higher standards striving to realize your social and academic responsibility to the community and our world. And whoa,  does the world need you right now.”

Recalling her own personal success story with a hint of humor, Winfrey implored the school’s graduating class of scholars to always put service above personal gain.

“People see me as a brand. But for me it’s not a business, it’s a question of what do you stand for,” she said.  “I’ve made a living, I’ve made a life, I’ve made a fortune really — it’s fantastic — all good, from being true to myself. The biggest reward is not financial benefits,  though it’s really good because you can get a lot of great  shoes. But those of you who have a lot of shoes know that having great shoes, or a closet full of shoes or cars or houses or square footage doesn’t fill up your life. It doesn’t. But living a life of substance can; substance through service by offering up your whole self.”

Winfrey’s ties to Agnes Scott now run deep. Sithokomele P. Mabaso,  one of her adopted “daughter girls” who attended the school Winfrey founded in South Africa ten years ago, was among the graduating class. Recently, Winfrey filmed her recent HBO movie, “The Immortal Life of Henrietta Lacks” on the school’s campus.

Speaking on the eve of Mother’s Day at the premiere all-women’s college, Oprah’s address could not have been more fitting or timely. Agnes Scott is one of the finest private colleges in the country with a venerable history of graduating great artists, thinkers and leaders.  In a toxic political environment where hyper-aggressive masculinity is ruling the day, our nation may need a healthy shot of enlightened estrogen to help restore the balance  —  or at least some semblance of sanity.

On the same day, for example, President Donald Trump was speaking at the commencement for Liberty University in Lynchburg, VA, founded by the Bible-thumping televangelist, Jerry Falwell. At the academic bastion of creationism and concealed handguns, Trump channelled a characteristically less compassionate, self-centered message than Winfrey’s.

“I’ve seen firsthand how the system is broken,” Trump said. “A small group of failed voices who think they know everything and understand everyone want to tell everybody else how to live and what to do and how to think. But you aren’t going to allow other people to tell you what to do especially when you know you are right. We don’t need a lecture from Washington on how to lead our lives.”

Yes, it’s unspeakably depressing that we’re increasingly turning to the rich and famous to run our country these days. It’s hard to remember that there was once a clear, bright line between politicians and celebrities. No more.

Case in point: When asked during an interview on Bloomberg News in March, Winfrey explained why she had never considered running for office. But after watching the horrifying nightmare of the Trump administration, Winfrey hinted she may keep her options open.

Previous Article
As Atlanta seeks rebirth, city must overcome segregationist past cited in new book
Next Article
Perdue bill blows up with majority leader on board