This year marks the 25th anniversary of the 1996 Centennial Olympics games.

Growing up, I was a daddy’s girl, but one of my favorite ways of spending time with him was watching sports on TV. That time with him gave me a love of athletic competition and I am grateful that he introduced me to his passion.

As a middle school-aged girl living in Birmingham, one of my fondest memories involving sports was in 1996. It was that summer when the Olympic games were in Atlanta. I was only two hours away from it, and the world never seemed closer. 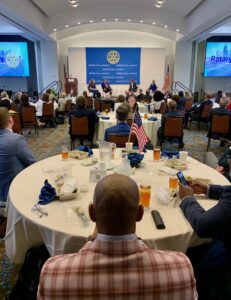 Rotary Club of Atlanta hosting a panel discussion on the legacy of the Atlanta Olympics during weekly meeting.
Credit: Kelly Jordan

Watching the opening ceremonies with my family, I was wondering how I could get a pair of Michael Johnson’s gold spikes. I was enthralled watching gymnast Kerri Strugs stick her landing on one foot, giving the U.S. women’s team their first gold medal in the all-around competition. The excitement was palpable.

While the events 25 years ago were certainly breathtaking in their own right, they left a lasting impact on me. The Olympics instilled in me a fascination with current events that eventually led me to a career in journalism.

So when Maria Saporta, founder of SaportaReport, said that she was moderating a panel discussion with Ambassador Andrew Young and former mayor Shirley Franklin and needed a reporter to cover the event, my hand rose up like an eager teacher’s pet hoping that she would pick me.

She did, and last week I attended the Rotary Club’s weekly meeting where I watched Saporta, Young, Franklin and gold-medal winner Edwin Moses discuss the legacy of the Atlanta Olympics and the impact it has on our city.

I was hanging on the panelists’ words as they gave me and the audience an inside look at how the world came to the capital city.

During the discussion, Young said that the Olympics were “in his blood.” When he was four years old, he watched Jesse Owens compete in the Berlin games in Nazi Germany at a movie theatre in New Orleans.

But when the opportunity came for the former mayor to bring the games to Atlanta, some people thought that he was crazy.

He described how he started to lobby for the games and was in awe when over 400,000 Georgians volunteered over a ten-year period to host the games. Young described it as a “religious phenomenon.”

Moses talked about his unique perspective being the American representative on the International Olympic Committee’s (IOC) athletes commission since 1981 and later became a member of an ad hoc committee on the Atlanta Organizing Committee.

“There are two things that really made Atlanta the city that it is today,” Moses said. “The airport and the Olympic games. Those two things really changed the whole dynamic.”

Franklin was on Young’s mayoral staff when he started working on the bid.

“The most important thing I learned [was] that I don’t know everything, and Andy knew it,” she said, adding that the experience taught her to follow – an important lesson at the time.

Saporta chimed in, saying  that when she was working at The Atlanta Journal-Constitution, her colleagues would say, “Andy was the only mayor in the U.S. with a foreign policy.”

Although the games did not achieve the “best ever” superlative from then-IOC President Juan Antonio Samaranch, Young said, “Every Olympics is a good Olympics, but there’s not been a single Olympics that has had as many people in attendance as Atlanta has. Not Russia, not China, not England, not Japan.” He said all of the money raised to fund the games were from private contributions; the city did not ask for federal, state or local funding at all.

As the discussion was winding down, Saporta asked her last question to the three wondering “what is the next big idea” for Atlanta?

Moses answered first by saying that Atlanta cannot give up on being “the city too busy to hate.”

“We can be the phalanx going forward of what a model city can be,” said Moses, “and I think that we’re gonna have to do some work to make sure that everyone knows that this is that place.” 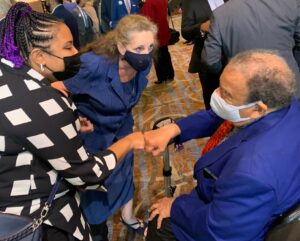 Franklin answered differently, mentioning how the city needs to address the wealth, education and health gaps that Atlantans are facing.

She responded, “we cannot go into the rest of the 21st century with 20 percent or 18 percent of the people who live in the metro area living below the poverty line and being stuck in poverty.”

Young later complemented Franklin, saying that she “could plant seeds and watch them grow and water them and nurture them and then tell other people how to get it done. She has far more influence in the shaping of this city than anybody imagines.”

As the panel ended and the meeting was coming to a close, I was able to catch Young as he was making his way out of the door to ask him one question:

“What was your favorite memory of the 1996 Olympic games?”

It took him a few moments to answer, but he said that it was on September 18, 1990, when the city that he loves received the bid to host the games. Although he said he didn’t get to enjoy the games themselves, the outstanding work by the more than 400,000 volunteers that made it happen “was worth all the effort.”