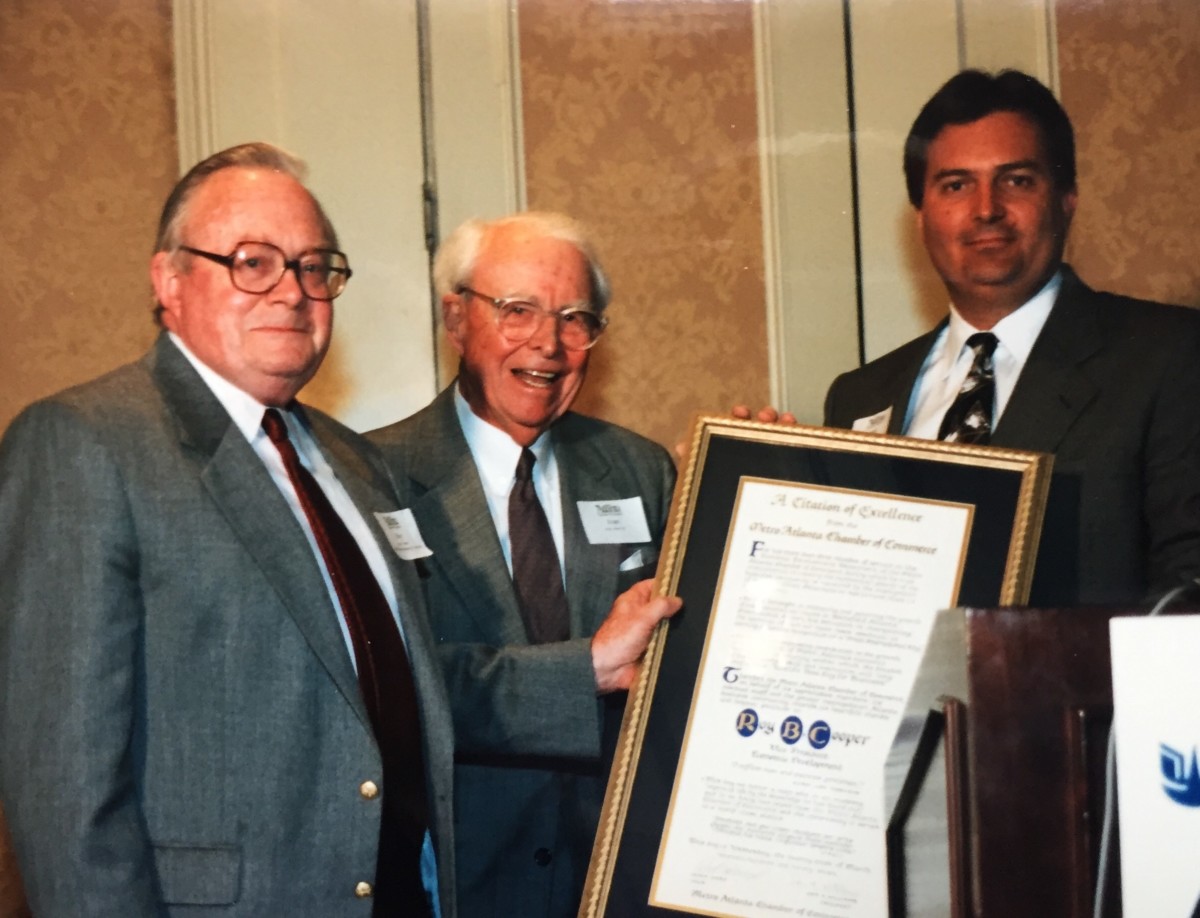 For more than three decades, Roy B. Cooper was an economic development icon working at the Metro Atlanta Chamber. 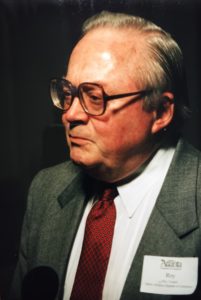 Cooper, 91, died on June 11. A service in his honor was held Sunday at the A.S. Turner & Sons funeral home in Decatur.

The gathering brought several Atlanta leaders who worked with Cooper over the years, including George Berry, former Georgia commissioner of economic development; Susan Neugent, a former senior vice president of the Metro Atlanta Chamber; John Leak, who used to work for Central Atlanta Progress; and Becky Blalock, a former executive with the Southern Co.

Neugent gave a wonderful tribute of Cooper during the service, and she is letting me share it with all of you. It captures Cooper’s special place in Atlanta’s history.

Below her comments, I’m including a story I had written in the Atlanta Journal-Constitution when Cooper retired in March, 1997.

Susan Neugent’s Tribute to the Career of Roy B. Cooper:

In the simplest of terms, Roy Cooper built a vibrant international metropolis from the foundation of a small city in the still largely rural, un-air-conditioned South, starting at a time that was fraught with the roiling social changes that were to influence the last four decades of the American 20thcentury, and culminate with the 100thanniversary of the modern Olympic Games, staged, like a theater-in-the-round, in a miles-wide circle outside of Roy’s office. 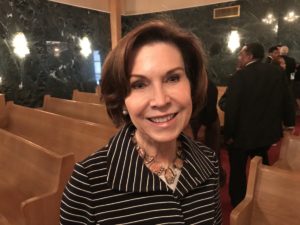 So many of us who had the privilege of working with Roy know that the true telling of the story of Atlanta’s majestic rise from its modest status in the mid-20thcentury to the significant global, economic, civic, social and cultural center it is today can be ascribed, in no small part, to the career of Roy Cooper.  Roy would be the first to downplay his role in building Atlanta today. He would say that he was a part of a very good team.  We’ll stipulate that and say that Roy always made a good team better.

Roy began his professional career at GA Tech in 1956; later moved to the DeKalb Chamber; then, in 1966, to the Atlanta Chamber of Commerce, where he led economic develop initiatives until 1997.  Roy’s intellect, perseverance, character and knowledge, and his direct, open, warm and welcoming manner earned him (and the Atlanta Chamber and the City of Atlanta) the respect and trust of hundreds, and probably thousands, of corporate, business, civic, faith and neighborhood leaders.

Roy’s very significant role in establishing international air service, in the expansion of Hartsfield-Jackson International Airport, in the regionalization of our economic development efforts and surface transportation systems, and in the collaborative efforts that were required to succeed in all those achievements rendered our remarkable region today. 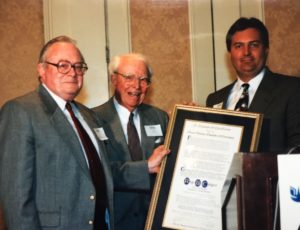 So very many of Atlanta and Georgia’s successful strategies to woo the top Fortune companies were developed in Roy’s office, which was perpetually stacked shoulder-high with newspapers, magazines, reports, memos, letters and his own notes – an office condition derided by the champions of “neat and orderly,” but never was there a time that Roy couldn’t find an obscure ten-year-old document that would become the cornerstone of another successful economic development project.

Among those projects, which we take for granted today, were the headquarters relocations of the huge institutions: GA Pacific, UPS, the American Cancer Society, Holiday Inn, CARE, Boys and Girls Clubs and the Institute of Paper Science and Technology.

Not only does Roy leave a legacy of a great city-state, the world’s busiest airport and a long list of major business relocations and expansions, but Roy’s legacy also includes several generations of economic and community development and research professionals who aspire to do things the Roy Cooper way.  Not only do we consider ourselves mentored, prepared, tested and steeled for all the world brings our way but we consider ourselves fortunate to have found the best mentor, advocate, sounding board and friend one could ever have in Roy.

The words Roy’s colleagues use to describe him are honest, direct, forthright, genuine; fair, caring, warm, open; independent, tough, thorough, unrelenting. Without exception, Roy found the best in others, even when it was hard to find. And, without exception, he avoided the spotlight and never sought credit for his efforts. 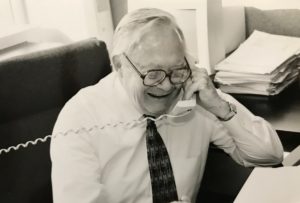 Roy was the original “straight-talk, no-spin” guy in a town full of people described as audaciously over-promising, over-estimating and with over-the-top ambition.  Undaunted, with his trademark chuckle and shrug, Roy kicked the spin aside, dug deep, worked with nothing but the facts, ingenuity, sharp wit and uncompromising integrity to deliver, what he said he would deliver, when he said to expect it. He helped Atlanta meet our highest dreams, time and time again.

Pat, David and Alan, Roy’s grands and great grands, Roy’s extended family and church friends:  Please look around and behind you.  All of us stand today in tribute to the business community giant who also meant the world to all of us.  We respected, loved and cherished him.  And, we are all the better for his life’s work.  We hope you take great pride in what Roy built – a great city and a legion of devoted friends.

By Maria Saporta
As published in the Atlanta Journal-Constitution on March 27, 1997

A week ago, Roy B. Cooper threw away two long drawers of files he had labeled “Those that got away.”

But he kept 2 1/2 drawers of files of companies that moved operations to metro Atlanta.

Those files sum up Cooper’s career. Since 1966, he has headed economic development for the Atlanta Chamber of Commerce. He has been at the chamber longer, by far, than any other employee. He retires on his 70th birthday, April 2 —31 years and a day after he started.

So on Wednesday, chamber leaders surprised Cooper with a lunch in his honor. “We in Atlanta should have a hall of fame for unsung heroes, and if we did, Roy Cooper would be the first to be inducted,” said George Berry, an executive with Cousins Properties and a former general manager of Hartsfield International Airport. “If there’s a single person who deserves credit in making Atlanta an international city, it is this man.”

Shortly after Cooper joined the chamber, Italy’s Alitalia asked for rights to fly to Atlanta. Then Belgium’s Sabena wanted to come. But Atlanta was not a designated trans-Atlantic gateway: Southerners going to Europe had to stop in New York first.

Hometown carrier Delta Air Lines lobbied against Atlanta’s designation as an international gateway, partly because it feared losing the business of flying passengers to New York.

“We spent 10 years on that project, and in 1978, the case was finally settled,” said Cooper, who personally prepared the reams of documents necessary for Atlanta’s gateway designation. 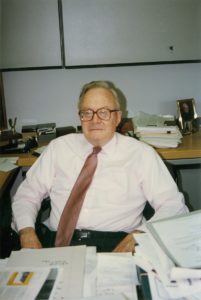 Now, a number of foreign airlines serve Atlanta. Delta itself has 158 international flights a week out of Hartsfield. And those air links have helped bring hundreds of international companies to Georgia.

It was just one of the ways, he said, that the chamber looked ahead.

And what set Atlanta apart from other chambers was the involvement of the very top business leaders.

“We could have been another Birmingham, but we weren’t because of our business leaders,” he said. “The day we buried Martin Luther King, those guys were in the parade, leading it.”

Enlightenment had its costs. Segregationist Lester Maddox, who later became governor, took out a newspaper ad announcing he was resigning his chamber membership after the organization accepted its first black member.

Looking back on his career, Cooper said one of his greatest moments was when the American Cancer Society moved its headquarters here from New York, although Atlanta didn’t meet any of its criteria. His biggest disappointment was when the Microelectronics and Computer Technology Corp. chose to locate in Austin, Texas, rather than Atlanta, in the 1980s.

One of Cooper’s greatest contributions was unifying the many counties and communities around Atlanta in economic development efforts. “He was a metro man before anyone ever thought about it,” said Gerald L. Bartels, who recently retired as chamber president.

Looking forward, Cooper believes Atlanta will continue to prosper. But there are problems.

“We’ve got far too many governmental bodies. Can we get the city of Atlanta and Fulton County to merge? Taxes in the central city are so high compared to the suburbs. We need some way to expand the revenue flow for the central city,” Cooper said. “Certainly the combined brains of this town —business and government —ought to be able to find solutions to these problems.”

But this time, they won’t have Roy Cooper’s help.