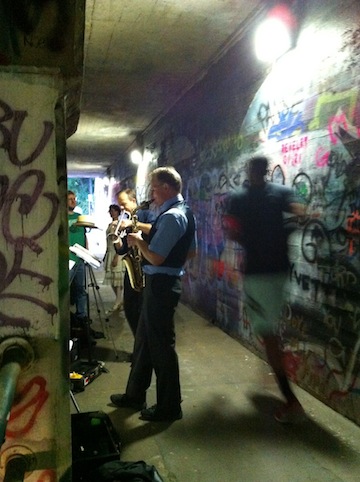 A runner passes by the Sacre du Krog performance in the Krog Street tunnel. 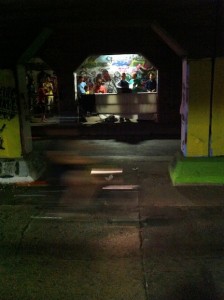 A motorcyclist zips by the Sacre du Krog performance in the Krog Tunnel.

In Paris 100 years ago, “The Rite of Spring” shocked the audience with idiosyncratic music and rather bizarre choreography. Viewers booed loudly, got in fistfights and forced composer Igor Stravinsky to flee. Police had to restore order.

In Atlanta last Wednesday, an homage to the ballet unfolded amid a different kind of disorder provided by an unusual location: the century-old Krog Street tunnel, best known as an elaborately graffiti’d passageway between Inman Park and Cabbagetown.

As the commemorative free performance—billed as “Le Sacre du Krog”—began, a cornet player and saxophonist began to blow. A car passed a few feet away, its driver blowing his horn back.

Amid the cacophony, a woman danced a film version of the ballet projected onto a dark graffiti’d underground wall. An audience volunteer begins to read a critic’s review from 1913, straining his voice to be heard over the MARTA train rolling above.

Le Sacre du Krog was the latest incarnation of a monthly series of performances on the edge of DeKalb Avenue leading to Cabbagetown. Beginning next week, creators Brian Bannon (on sax) and Bill Taft (cornet) are scheduled to debut “Krog!,” a “best of” their Krog Street performances at Theatrical Outfit in the Atlanta Fringe Festival. 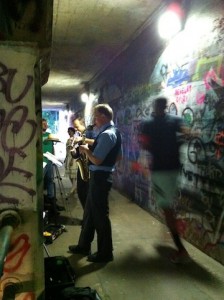 A runner passes by the Sacre du Krog performance in the Krog Street tunnel.

“It gives us a chance to present stories, photos and music from a year-and-a-half of Krog shows at a more comfortable theatre setting,” said Bannon. “With bathrooms and everything.”

In an interview for the Fringe Festival website, the duo described a Krog show as “Live music, silent film, modern video, historic photos, current Krog shots and stories both old and new, real and fabulated. We use Atlanta’s past to tag its present.”

Bannon and Taft’s eclectic influences include Thoreau. In the city, why can’t “back to the source” mean a return to Krog Tunnel?

“I like Atlanta history and Bill likes street art,” said Bannon. “The idea was to have it [the tunnel] be our Walden Pond. At first you see all the graffiti but after awhile you want to look at the individual pieces.”

Bannon said he and Taft have been performing in the tunnel monthly since January 2012, marking a century since the tunnel was constructed (as noted by the 1912 and 1913 etched into concrete at the tunnel entrance.) Their production company is called Sob Songs for the Gilded Age.

Bannon, a saxophonist and standup comedian, said the concept was inspired in part by a event once put on by Taft at a local bookstore: Taft enlisted a group of fellow performers to re-enact “Battleship Potemkin,” Sergei Eisenstein’s classic pro-Bolshevik film about a Russian naval mutiny. The performance unfolded in the bookstore’s parking lot while the movie played. 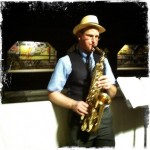 The performers chose the Krog Street tunnel because it connects them—Bannon lives in Cabbagetown and Taft in Lake Claire. The acoustics are excellent, Bannon said. That is when nobody is sitting on a horn when driving through the tunnel.

The Krog street performances generally tend to have a centenary theme, Bannon said. In September, they celebrated the 100th birthday of John Cage, the late 20th century composer of experimental atonal music. The performers dragged chains through the tunnel and snapped wet towels on the ground, a celebration of Cage’s pioneering work in altering instruments and introducing unorthodox sounds to music.

The chains and towels piece, Bannon said, lasted precisely 19 minutes and 12 seconds, to mark the year of Cage’s birth.

Other shows performed by the duo include commemorations of the 1912 sinking of the Titanic, 1913 murder of Mary Phagan, and the 1913 Armory Show, the event marking the debut of modern art in New York City. 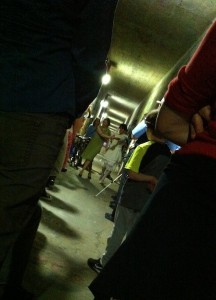 Marymay Impastato and Stephanie Ludwig dance the tango as part of Sacre du Krog. A century ago, the tango was considered scandalous, and modern dances such as “The Rite of Spring” inspired rioting.

The century theme highlights the power of the arts to shake the status quo. In Sacre du Krog, a 1913 newspaper clipping from the New York Times notes that President Woodrow Wilson canceled his inaugural ball out of fear that attendees might dance the turkey trot, bunny hug and other ragtime dances “and thus provoke what might amount to a national scandal.”

In Atlanta, those dances and the tango were considered shocking, or in the words of The Atlantian newspaper, “absolutely inexcusable of introduction into a company having any reward for the right relation of things.” It went on to blame women for the trend, because if they didn’t accept a man’s offer, these affronts to moral character would quickly go away. “We have certainly reached the limit in meaningless and grotesque dancing,” the Atlantian wrote.

Next week’s scheduled performances at Theatrical Outfit in the Atlanta Fringe Festival will likely be a more conventional audience experience. Attending a Krog Street performance can be a bit of an ADHD nightmare, an assault on the senses.

Expect a constant interruption of cars noisily passing through the tunnel and the performance sounds drowned out by trains rolling above. To Bannon, these auditory layers are like new graffiti getting splashed over the old.

“Somebody else comes along and covers it up,” Bannon said.

The audience of 20 for Sacre du Krog appeared to have planned to be there; one brought a folding chair. They were joined by others who were just, like the cars and bikes, passing through. 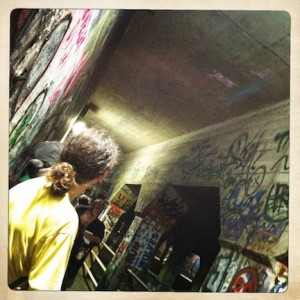 The audience at Sacre du Krog watched videos projected on the ceiling of the Krog Street tunnel.

Ulato Sam observed the performance from the opposite side of the tunnel, where he and fellow students from Morehouse were doing a photo shoot. He loved the live classical jazz.

“The atmosphere that is created is not just sound in the tunnel but the art that is here,” he said, eyeing the walls of bright graffiti. “It’s the music scene, it’s visual and auditory and what is created is a real good show.”

Molly MacLaren, a project manager for a construction company, discovered the performance while strolling through the tunnel. She called it an example of how “living in Atlanta can be so cool.”

“I was listening to NPR this morning and they were talking about the ‘Rite of Spring,’ ” MacLaren said. “ Then this evening, I walk right into it.”

After all the careful planning to line up the Sacre du Krog participants and prepare the music on this exact date and this funky location, Bannon was happy and amused with the entertaining results.

“It was strange. It was all very lyrical and fun,” said Bannon. who tends to giggle sometimes when he finishes a sentence. “It was just something to try.”