Georgia State University researchers have unveiled a tool that vividly shows the degree to which the COVID-19 pandemic has slammed the door on sales tax collections in metro Atlanta and two other regions in the state. 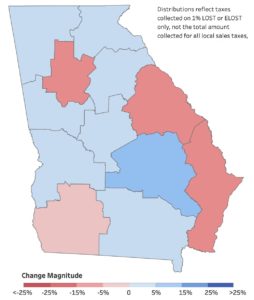 Sales tax collections declined by at least 15% in June across metro Atlanta and two other regions in Georgia, compared to rates collected in Jun 2019, according to a new research tool devised by researchers at Georgia State University. Credit: frc.gsu.edu

The first report to be issued shows collections dropped by at least 15% in June in metro Atlanta and two other regions – from Augusta to Savannah, and south to the Florida border. The most recent rate is a comparison of collections in June of 2020 with June of 2019. The rate of decline is from 15% to 25%.

These rates are an improvement from May, when a decline of 25% or more was recorded in each of the three regions.

A drop of either of these rates may be welcome news for the City of Atlanta. The city predicts a 29% drop in collections of local option sales taxes for the fiscal year that began July 1, compared to the prior year.

This 29% figure is cited in the proposed budget Atlanta Mayor Keisha Lance Bottoms presented May 1. The final, adopted version of the budget does not appear to be available on the city’s website.

The Georgia State research tool offers real-time information that will help governments and school districts plan for, and respond to, expected losses in sales taxes.

For some governments in Georgia, sales taxes are nearly as significant as property taxes in funding services and debt – in Atlanta, they represent 12.2 percent of the mayor’s proposed budget. 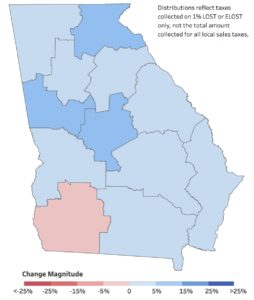 Only in Southwest Georgia, where COVID-19 soon would become a major health challenge, was the collection of sales taxes down in February compared to February 2019. The rest of Georgia showed increased collections. Credit: frc.gsu.edu

All governments are scrambling for current information to manage resources during a pandemic-related recession that shows no signs of receding. The GSU tool can help in that regard at both the county, regional and statewide basis. Sales tax revenues are an significant, but not exclusive, window into a local economy.

“For most governments, sales taxes are not only an important revenue source, they also serve as an indicator of economic vitality,” Robert Buschman, associate director of Georgia State’s Fiscal Research Center, said in a statement.

“Illustrating the effects of the coronavirus slowdown in the second quarter, the tool shows eight of the 12 planning regions of the state saw declines in sales tax distributions compared to the same period a year earlier,” Buschman said. “Three of them experienced declines of more than 10 percent.”

Buschman is familiar for the fiscal notes he provides on proposed revenue legislation at the General Assembly; his areas of interest include the growth and equity effects of tax reform. Thayer’s policy research focuses on housing, open/public data, and the operation of policy mechanisms, according to their bios posted by the university. 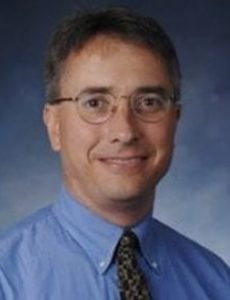 Buschman wrote in an email Thursday that these taxes were selected because at least one is collected in every county. These taxes enable an apples-to-apples comparison, in that they are collected countywide.

Viewers can set search parameters by month and year. Parameters include the type of commodity on which the sales tax was collected. The tool provides information from January 2016 through June 2020 and is to be updated as future collections are recorded.

In Atlanta, the decline in anticipated sales tax collections represents the $82.2 million in LOST revenues expected in the current fiscal year, compared to the $115.4 million that was in the adopted 2020 budget. The 2020 budget covered the fiscal year ending June 30.

Audited statements of the city’s 2020 budget are still being compiled.

The credit rating was downgraded on bonds sold on behalf of Mercedes Benz Stadium and State Farm Arena. Atlanta’s share of stadium bonds are backed by the city’s hotel/motel tax; the arena bonds are backed by car rental taxes collected in Atlanta and College Park, where rentals are driven mainly by travelers using Atlanta’s airport.

Analysts said both categories of taxes were to be negatively impacted by the pandemic-related recession and the COVID-19 impact on travel.

Previous Article
Reporter’s Notebook: The conservation issue that divided Republicans and more
Next Article
Tyler Perry on the reopening of his studio at Fort Mac: ‘So far, so good’