Sally Sears’ latest big story is her own travel memoir, an around-the-world journey by a budding journalist in the era when Rick Steves was just beginning to tell travelers to get off the beaten path. 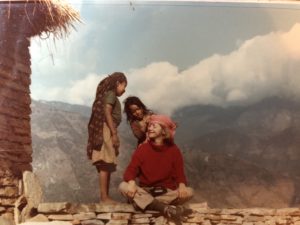 Two Nepali girls shows Sally Sears how her bandana can resemble their head scarves if it is tied properly. Credit: ‘A Wealthy Man on the Roof of the World’

Sears writes in her just-published A Wealthy Man on the Roof of the World, and Other Stories that she wanted to travel extensively before her career as a television journalist took off. As it did – Sears went from stations in cities including Memphis and Dallas to become a front line reporter in Atlanta, where she brings stories into the homes of millions of viewers. Today, Sears’ reports appear on WGCL-TV, CBS46.com.

Sears also has taken a stand on environmental conservation. She’s the founding executive director of the South Fork Conservancy, Inc. and has helped raise funds for conservancy projects including a $2.5 million pedestrian bridge across Peachtree Creek. This work may speak to the first quote in Sears’ book: Ruth Bader Ginsberg – “Whatever you choose to do, leave tracks.” 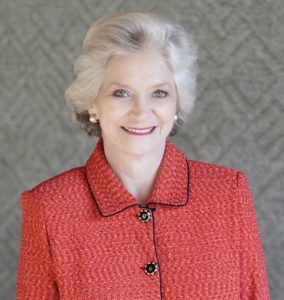 The coronavirus pandemic has its part in the book. The enforced solitude raised for Sears questions of when will we travel again, how will we travel, and prompted her, as she notes in the epilogue, “to reconsider what stays alive after a journey.”

The trigger to write was a box of souvenirs from the trip she discovered in a pandemic exercise many have experienced – cleaning the basement. The journey of writing the memoir provided its own series of lessons.

“The more I wrote, the more I realized I am homesick for getting out on the road, that this is good medicine for the pandemic,” Sears said. “I realized, after I finished, that it is by seeing the world that you find yourself. When you stare hard at something outside of ‘you,’ when you pay really close attention and forget yourself, to encounter a new experience, or new person or place, it reveals something about yourself to you – just because you are observing.”

The robust journal she kept throughout the trip provided material for the precise images Sears creates. She provides just enough shading to observe, without getting in the way of her story, that far-away places aren’t always all that distant, and threads of humanity cross borders and cultures: 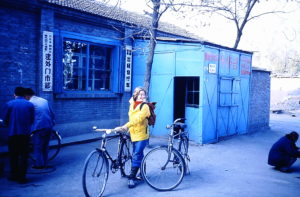 Despite a ban in Beijing on foreigners renting bicycles, Sally Sears was able to rent a black Flying Pigeon brand bike for a week. Credit: ‘A Wealthy Man on the Roof of the World’ 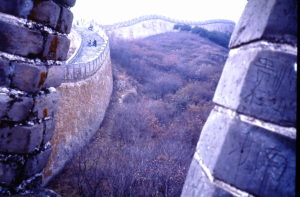 The Great Wall of China is ‘graceful as a resting serpent [that] lies easily on the hillside,’ Sally Sears writes. Credit: ‘A Wealthy Man on the Roof of the World’

One angle Sears all but omits from the book is the impact of her childhood car trips from home in Montevallo, Ala. to destinations as exotic as Panama. On that particular trip, Sears and the rest of the family spoke into her father’s microphone to record reports that were sent on tape and aired on WBYE-AM, the radio station her family owned in Calera, Ala.

Sears recalled her foreign broadcasting assignment with a concise report that remains one of her storytelling trademarks: 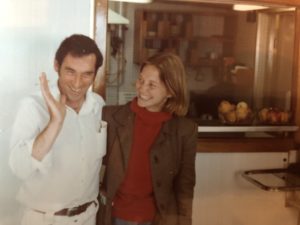 A man known to this day only as Jimmy the Cook regaled Sally Sears and other travelers with great stories on a ferry crossing of Marlborough Sounds, in New Zealand. Credit: ‘A Wealthy Man on the Roof of the World’

And just like that, radio listeners in Shelby County, Ala. heard about the sights and sounds, people and places of Central America as reported by the Sears family.

The Sears were familiar and trusted. Ralph Sears, Sally’s father, served 24 years as Montevallo mayor, dying in office in 1996, following 16 years on the city council. Marcia Sears, Sally’s mother, served as editor of the family-owned Shelby County Reporter and was the first woman to head the Alabama Press Association, which in 2003 presented her in with a Lifetime Achievement Award. 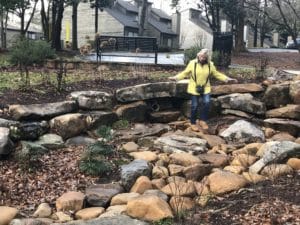 Sally Sears, founding executive director of South Fork Conservancy, steps her way down a series of rocks selected to be big enough to make adults feel like youngsters when they play on them in Armand Park, one of the conservancy’s projects. File/Credit: David Pendered. Jan. 24, 2020

These roots in community find their way into A Wealthy Man on the Roof of the World. Sears quotes from one of the letters she sent home, back in the day when letters from abroad were written on the thinnest of paper to reduce the cost of postage. Sears writes of the recorded voice she heard giving instructions to passengers on an airplane:

This, on an aerogram mailed home, to Shelby County, Ala. on the occasion of flying into Kathmandu.