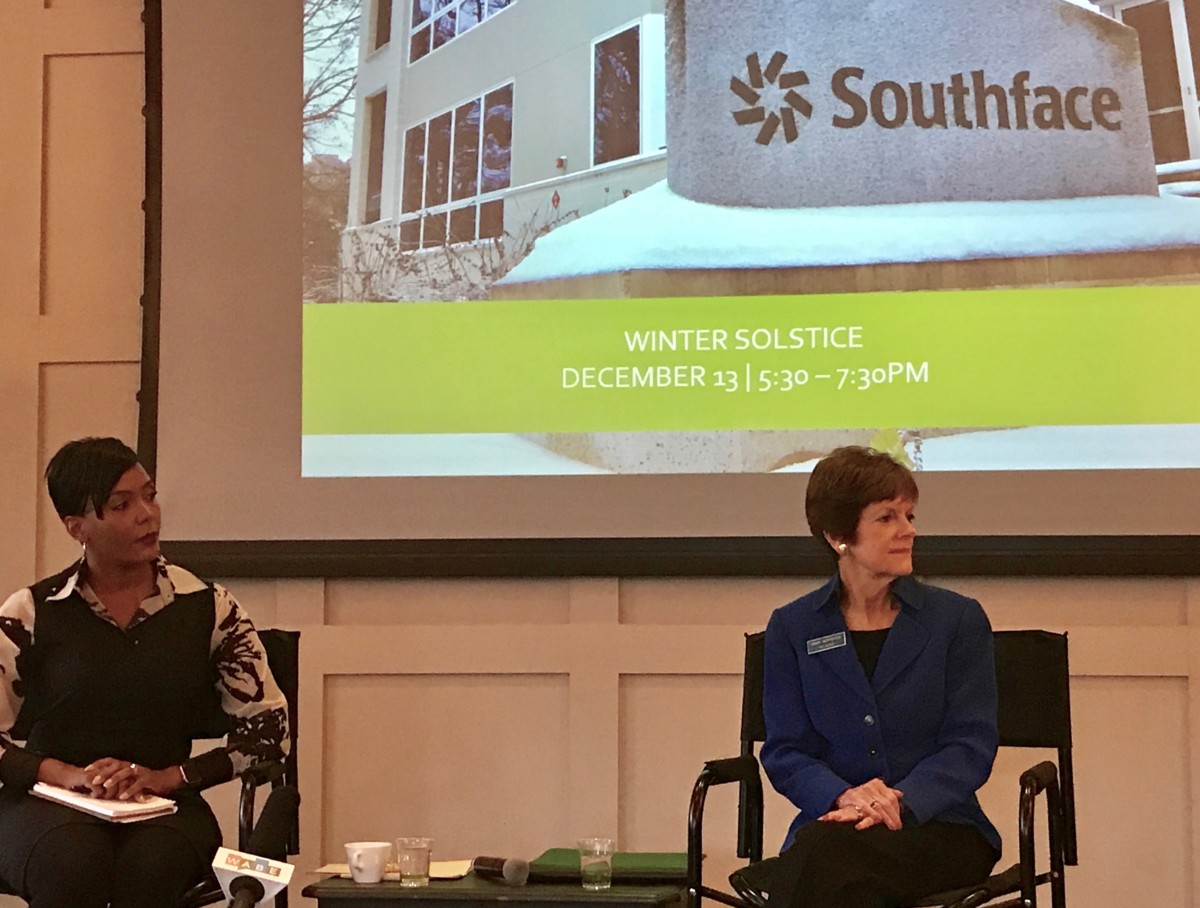 Both candidates described their platforms for making Atlanta a more sustainable city, and both seemed to be keenly aware that the environmentally-focused voters would be critical to winning the Dec. 5 runoff to succeed Mayor Kasim Reed.

Many of those voters likely supported mayoral candidate Cathy Woolard, who came in with a strong 3rd place showing in Nov. 7 election. Norwood and Bottoms realize Woolard’s voters could sway the outcome. 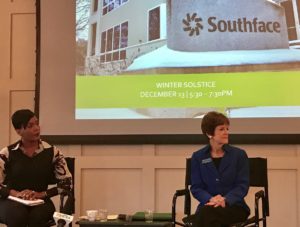 “I want to commend all of you for bringing these issues to the forefront,” Norwood told the SART gathering, which meets on a monthly basis. “I want to assure you that I will continue the good work the current mayor has done. “Whether it’s water, whether it’s clean energy, whether it’s continuing our green building challenge, whether it’s implementing the climate action plan, we need to make sure that all of that is done, without politics.”

Bottoms, who often talks about her family on the campaign trail, said her grandfather was “the original recycler,” picking up one man’s trash and turning it into treasure. She also said her children have suffered from asthma, which has made her more sensitive to environmental issues.

Andrea Pinabell, executive director of Southface – which organizes the SART programs, asked the candidates about their values in governing the city.

Bottoms said her mother taught her to “treat people, not the way they treat you, but the way you want to be treated.”

She added that it’s important to have people around her who would challenge her.

“My biggest challenge will be separating myself from the current mayor,” Bottoms said of Reed, who has endorsed her. “I think the current mayor has done an incredible job with this city in pushing us forward, but it’s important that each administration be able to define themselves differently.”

Norwood said her values center around transparency, efficiency and accountability. “You will know where money is being spent,” Norwood said. “We need to make sure all of the funds are in the correct accounts.” She added that she will focus on issues important to SART – watersheds, land management and the Atlanta City Design Project. “The biggest challenge is making sure we are doing all these simultaneously.”

Both said it was important to make sure city departments are not operating in silos.

Norwood specifically mentioned the need to update the zoning ordinance and the tree ordinance and to seek green infrastructure solutions throughout the city. 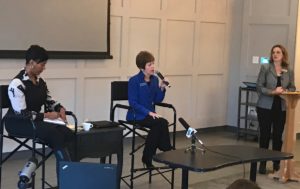 Bottoms said she wants to keep Atlanta moving forward and leave no one behind. She said she would prioritize infrastructure investments around seniors, parks, recreation centers and schools.

Bottoms said there needs to be a complete audit of the city’s procurement process “We can’t put our trust in people” she said, obviously referring to the current corruption investigation at City Hall. “We have to trust the process, and the process has failed.”

Norwood also mentioned how important it is to spend the city’s dollars as they were intended – with correct procurement – especially with approved funds for MARTA, transportation investments and water/sewer infrastructure projects.

“We have a once in a lifetime opportunity to get this right,” Norwood said.

There seemed to be consensus to continue the City Design process, which is setting a vision for 800,000 new residents by conserving neighborhoods and green space while developing greater density along commercial corridors.

Michael Halicki, executive director of Park Pride, asked if they would convene a parks and green space task force – similar to the one that existed in former Mayor Shirley Franklin’s administration.

Bottoms said it’s important to help people understand why the city should improve its parks and letting residents visit parks throughout the city. She also said education was important when it comes to bike lanes and bike paths.

“We need to make sure our parks are maintained in a manner that we want to see,” Norwood said. She also explained why she had opposed a bike lane on Peachtree partly because there are 178 curb cuts between Brookwood and West Paces. “I will work with you to see what we can do to make Peachtree Road work for everyone,” she said. 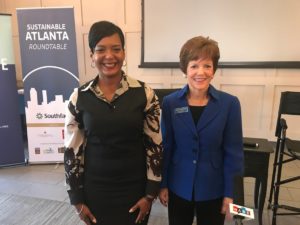 Keisha Lance Bottoms and Mary Norwood after the SART forum on Nov. 10 (Photo by Maria Saporta)

Both also pledged their commitment to Atlanta being a resilient city. Stephanie Stuckey, the city’s Chief Resiliency Officer, held the city’s resiliency plan and said the city is doing a lot of good work.

The only time the candidates got testy with each other was when Bottoms accused Norwood of opposing the building of a sidewalk in a community, calling it a “sidewalk to nowhere.”

Norwood, however, said the sidewalk in question was going to a subdivision where Bottoms and Reed both live. She said city needed to invest its limited resources to build sidewalks where there are destinations – schools, shops, residences and other activity centers.

The SART forum, held only three days after the election, helped reinforce the importance of having Atlanta become a more sustainable, walkable and green city. But it is not the only such forum that will be taking place.

On Wednesday, Nov. 29, there will be the Mayoral Forum on Greenspace – Runoff Edition – at Georgia State University (from 6 p.m. to 8 p.m.).

And Cathy Woolard will host a forum between both runoff candidates later this month. Woolard will ask Bottoms and Norwood to discuss issues vital to her campaign – ATL – “Affordability. Transportation. Livability.”