Students at SCAD are now able to learn using the new XR/LED Volume soundstage, one of a few in the state. (Image provided by SCAD.)

The technology is changing so quickly that it is now called the LED Volume stage.

The Savannah College of Art Design (SCAD) is showing their Atlanta campus students what’s next in the television and film industry by opening their new XR/LED Volume soundstage this quarter.

SCAD now has two of the high-tech stages — the most of any American academic institution. 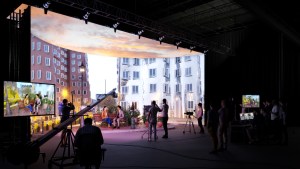 “The students have already started making projects on [the Volume] like commercials, music videos and short narratives,” said Andra Reeve-Rabb, dean of SCAD’s School of Film and Acting.

At over 40 feet tall and 20 feet wide, the LED Volume stage replaces a traditional green screen for special effects with the landscape or environment displayed on the screen, creating 3D real-time environments for video game and film sets. This new technology has been used in movies like “The Batman” and the TV series “The Mandalorian.”

From production design to fashion design, students from several majors are able to create projects using the Volume.

Since it is used as an educational tool, SCAD is allowing companies to use this technology with the caveat that their students will be involved in the production.

“I am a fan of ‘The Mandalorian,’ so I knew about the technology and the second I got in, I was blown away,” said Maura Hayes, SCAD Immersive Reality graduate and XR studio technician for the new Volume stage. “I signed up for a class, not entirely sure what it would be and when I was told I would be working with our new XR stage, I was ecstatic.” 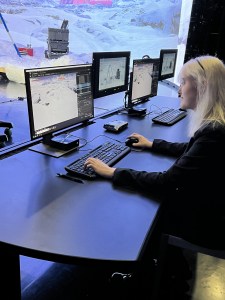 After using the volume at the Savannah campus for two quarters, Hayes wanted to use the equipment more and teach others to use it as well. When she discovered that her alma mater was opening a second stage in Atlanta, she applied and got the job assisting instructors with the technology.

“For [SCAD], what’s next is always about expanding that toolbox and that’s what the volume is. It’s one more tool that our students are training on that will give them a step ahead in the industry they’re interested in,” Reeve-Rabb said.