As the sea turtle nesting season winds down along Georgia’s coast, the number of nests appears to have dropped by about 21 percent compared to this time last year, according to preliminary data compiled by seaturtle.org.

The total number of nests of all turtle species counted this year in May, June and July was 1,652. That compares to a total count of nests of all species for the same three months in 2017 of 2,099. This year’s count is a few days short of representing a complete July.

The decline in nesting patterns also appears in the number of false crawls that have been observed. False crawls are noted when a turtle track on the beach shows the turtle had left the ocean, headed up the beach, and made a U-turn to return to the ocean.

To date this year, 1,515 false crawls have been observed. This compares to 2,021 false crawls observed during the same period of 2017, according to records kept by seaturtle.org.

It’s not likely the number of nests of any turtle species will rebound in August.

The major nesting period is in June and July, when the number of nests reaches well into the triple digits. The number of nests falls to a few dozen in August, according to records of past years compiled by seaturtle.org.

Predators have presented a major threat to sea turtle nests this year. The list of animals is startling, in that it speaks to the array of species with which humans share the coastline.

Raccoons have been the major cause of nest losses this year. Raccoons are followed by:

The nesting count that’s available on seaturtle.org’s webpage is compiled by the Georgia Department of Natural Resources. The state started counting turtle nests in 1989.

Nest of loggerhead turtles are of keen interest, given their precarious posture in the world.

Spotters this year have counted 1,648 nests of loggerhead turtles. That compares to a count of 2,152 during the same period last year, according to seaturtle.org’s records.

Over time, the number of loggerhead nests found in Georgia has been rising steadily since 2004, when a low of 358 nest were counted 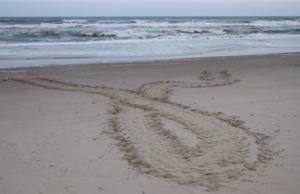 Sea turtles who leave the ocean to lay eggs are almost as likely to return to the water with out laying their eggs than they are to lay eggs in a nest, as recorded on this beach in North Carolina. Credit: emeraldisle-nc.org