An impactful scene from the movie "Seberg"

Alive or dead, Jean Seberg can’t catch a break from the movies.

Ironic, in a way, since she’s associated with two of the biggest “breaks” in cinema history.

The first was the Hollywood version of “the big break.” Much as David O. Selznick did decades earlier for “Gone With The Wind,” in the late 1950s, director Otto Preminger launched a nationwide search for an unknown to star in his Joan of Arc movie, “Saint Joan.” 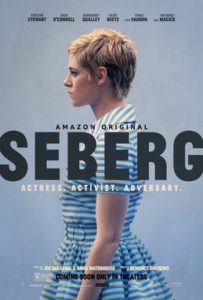 Movie poster of “Seberg” – a movie about actress Jean Seberg

He reeled in teenaged Jean Seberg from Marshalltown, Iowa. The notoriously sadistic Preminger did not treat her well – to the point that the young actress was actually burned when he filmed Joan’s death at the stake.

Her next “break” came as the star of Jean-Luc Godard’s “Breathless,” which signaled the commercial cresting of the so-called French New Wave in the late ‘50s and early ‘60s. As dictatorial in his own auteurist way as Preminger, Godard knew what he had in the beautiful young Seberg, probably better than she knew herself. For better and worse, she became an icon, with a spotty film career.

This is not the Jean Seberg “Seberg” is interested in – though director Benedict Andrews’ apparently assumes you know all this about her before you see his disappointing and exploitative picture.

Rather, “Seberg” is about the time in Seberg’s life when she was mercilessly harassed by the FBI. As it’s put in a1970 internal memo quoted in the movie, agents were instructed to “cause her embarrassment and serve to cheapen her image with the general public.”

Why? Because Seberg, who at age 14 signed up to support the NAACP, was now in bed, so to speak, with the Black Panthers. The Feds took the “in bed” part to heart, planting the rumor that she was pregnant with a Black Panther’s child. The baby died a few days after it was born, sort of terrible collateral damage in the Bureau’s ceaseless torment of the actor.

As the movie shows, Seberg (Kristen Stewart) was guilty of nothing more than, perhaps, naiveté. Having moved to Paris, she came back to Hollywood in the late 1960s to star with Clint Eastwood in the legendary flop, “Paint Your Wagon.” When she deplaned, she was photographed surrounded by African-American men, raising her fist in a Black Panther salute.

According to the movie, she did become involved – politically, socially and sexually – with a black activist named Hakim Abdullah Jamal (a very charming Anthony Mackie). She hosted glittering celebrity-studded fundraisers of the sort trashed by Tom Wolfe in a famous New York Magazine article.

She was guilty of being, well, a guilty white liberal. And a female one to boot. A pretty female with power. As Jamal points out, he and his colleagues had to raise a gun to attract 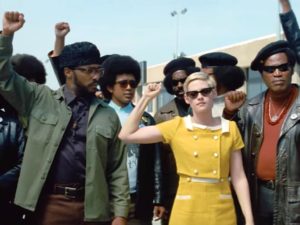 An impactful scene from the movie “Seberg”

media attention. All she had to do was cut her hair (Seberg sported the Mia Farrow “Rosemary’s Baby” look long before Farrow did).

Now, there’s a lot here for a movie. And maybe someday someone will make that movie. But Andrews has inexplicably moved Seberg herself out of the spotlight and turned his attention instead to a fictitious FBI agent (Jack O’Connell) assigned to Seberg’s case.

The result? A picture that would’ve been better titled “I Stalked Jean Seberg.”

See, the agent is good at his job, but unlike his partner (Vince Vaughn, terrible as usual), he has qualms about what the Bureau is doing to Seberg. His moral dilemma and complicated feelings about his quarry become the core of the film.

And like Seberg’s baby, Stewart’s attentive, fearless performance becomes collateral damage. She’s reduced to a supporting player in her own movie, as used in her way as Seberg was in hers. And it’s a shame.  And, almost as bad, a bore.

The “Seberg” movie can be seen on Amazon Prime.