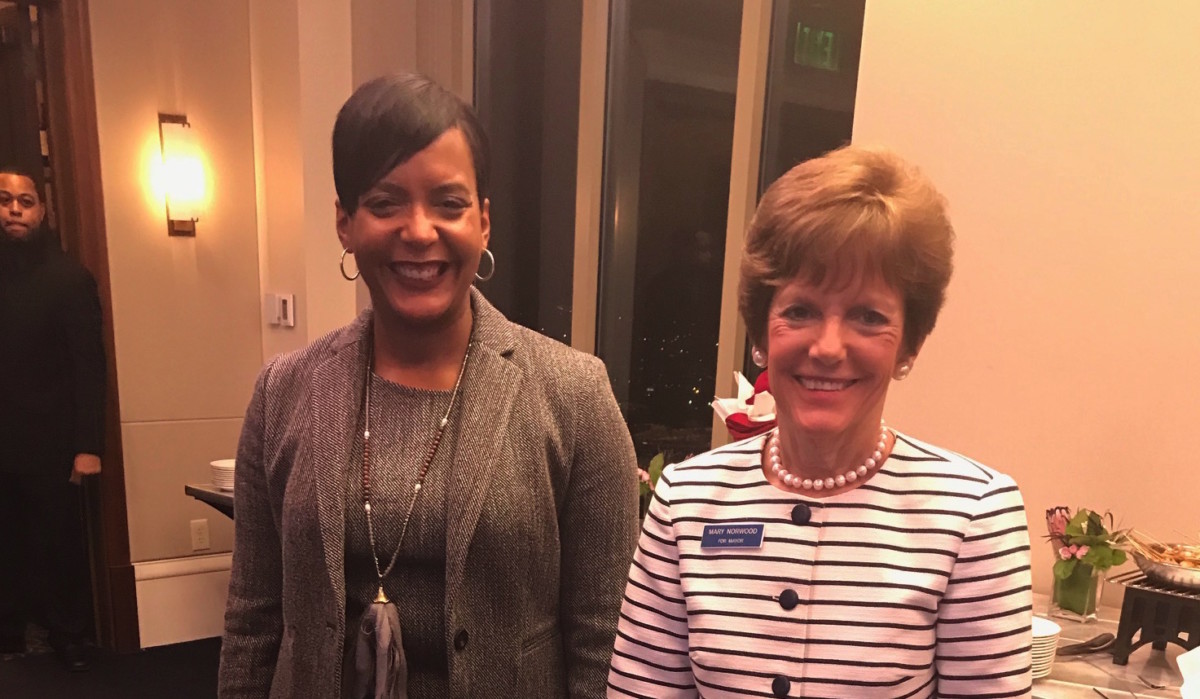 In a short forum Downtown on Thursday night, a small live audience and viewers on Facebook heard from the next mayor of Atlanta, as the two runoff candidates spoke about their priorities and pushed back against what are bound to be recurrent concerns.

Norwood, talking about traffic, mentioned the more than hour-long drive from Habersham Road to the Downtown forum. 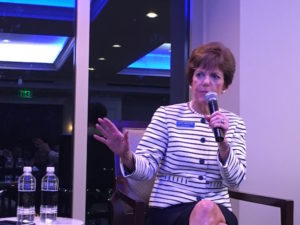 “Everyone who knows me knows that I am for equity across the city,” said Norwood, and promised that everything in her administration would be done through the prism of fairness. She said she lobbied the state for a legal change that lets Atlanta take over abandoned properties for redevelopment much faster.

Earlier in the forum, she’d mentioned renovating abandoned properties so they’re available to people like police officers, teachers and city staff to “knit communities back together.”

She said she knows the city, including neighborhoods on the south and west sides of town where development has been lacking.

“I have worked tirelessly to preserve neighborhoods and protect communities and that’s why there is so much support,” she said.

Bottoms placed first in the first round of voting. When that became clear just after midnight Tuesday, Mayor Kasim Reed introduced her for a speech at her watch party.

Reed is probably her most prominent supporter. But there’s also an apparently ongoing federal investigation into pay-to-play corruption in the city’s procurement department. Reed has not been accused of wrongdoing. But federal prosecutors have already netted four guilty pleas on charges related to corruption.

In response to a question about any role for him, or whether she would be beholden to him, Bottoms said Reed would have no formal role in her administration. 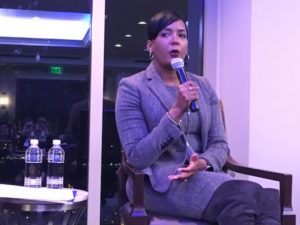 “Mayor Reed is the outgoing mayor, but I’ve also spoken with Ambassador [Andrew] Young, I’ve also spoken with [former] Mayor [Shirley] Franklin and I’ve previously met with [former] Mayor [Bill] Campbell. I think it’s important that we have a relationship to understand how we keep this city moving forward. We aren’t starting with a blank slate in January,” said Bottoms.

“Mayor reed is a friend, he has been a colleague with my work on City Council. But in January, there is a new mayor. And hopefully it will be me.”

Both Norwood and Bottoms also touched on priorities that they’ve both talked about during the months of first-round campaigning.

Norwood said public safety is No. 1 priority. She said she’d get the Atlanta Police Department staffed up. “We will get to 2,000 [officers] and we will do things that we ought to do to make that happen, giving them the tools that they need and the compensation,” she said.

Norwood also said she will put the best minds in her cabinet, especially on transportation, given the tens of millions of new dollars in new spending that will be allocated for transportation under a new sales tax.

“We need to make sure the politics are out of those decisions, because we need to design it right, procure it right, construct it right and execute it right,” she said.

Bottoms said she envisions the city being a city for all. And she addressed the audience directly, maybe 100 folks from private business, nonprofits and government gathered at the posh Commerce Club.

“But the thing that I think we have not done the best job that we can possibly do in this city is making sure that it is a city for all of our communities,” said Bottoms.

By that, she said she means there is a complete intersection of issues in the city: the need for quality education and the crime rate; affordability and communities that are left behind, traffic and people not being able to live in the city.

“We really have to talk about how we approach addressing each of those issues simultaneously because they are not issues in silos,” Bottoms said.

But in a pause for civility before what’s likely to be brutal campaigning before the Dec. 5 runoff, both were asked to make a positive comment about the other.

Bottoms said of Norwood: “Mary has an incredible amount of energy and it is admirable. She works a lot, she is across the city, physically present and I think that’s very positive because it’s important for people to connect with you and respect communities.”

The forum was hosted by SaportaReport.

Check out the whole video here: