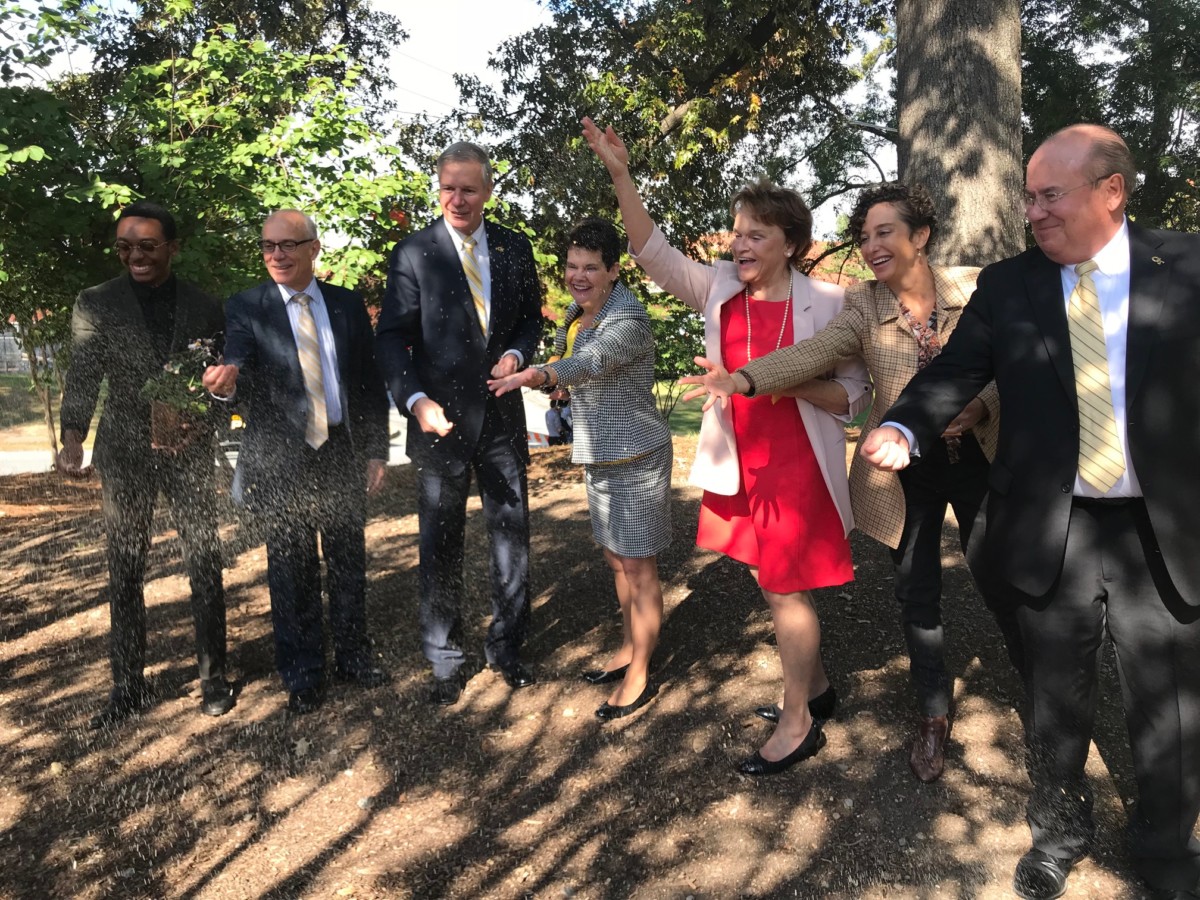 In lieu of a traditional ground-breaking ceremony, Georgia Tech and the Kendeda Fund planted seeds Thursday to begin construction on what will be the most environmentally sustainable building in the Southeast.

The goal is for the Living Building at Georgia Tech will follow construction guidelines so it will do little to no harm to the environment by using the greenest building materials and by being  a net zero building in terms of energy and water use. 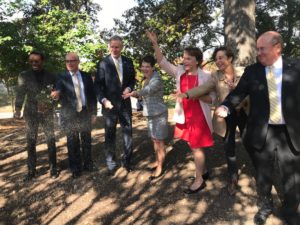 “It is a building that will literally give back to the environment,” said Bud Peterson, president of Georgia Tech. It will also serve as a living laboratory for our students, faculty and staff.”

The Living Building project, which is near the intersection of Ferst and State streets on the Georgia Tech campus, is becoming a reality thanks to a $25 million gift from the Kendeda Fund, which is covering 100 percent of the design and construction costs. The Fund also is providing an additional $5 million to support programming activities. It is the largest single grant the Kendeda Fund has ever made, and it ranks among the largest capital gifts ever received by Georgia Tech.

Diana Blank, a behind-the-scenes philanthropist, started the Kendeda Fund after her divorce from Atlanta Falcons owner Arthur Blank. The Kendeda Fund has been a major force in environmental circles, and it was Diana Blank who seeded the initiative to showcase a Living Building in Atlanta – one that would take into account the hot and humid environment in the Southeast.

“It was only last night that it really seemed real,” Blank said in a brief interview at the launch event. “It is a process. We will have challenges along the way, but challenges are good. I just hope we can change a lot of the politics in Atlanta so that people are more open to new ways of building that saves energy and water.”

The Kendeda Building for Innovative Sustainable Design is on track to become the first Living Building Challenge 3.1 certified facility of its size and function in the United States.
It will adhere to the most stringent standards of building construction so that it actually could end up producing more energy and water than it will use. 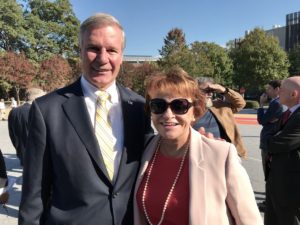 Georgia Tech and Kendeda took a novel approach in the building’s design process – inviting architectural teams to competitively bid for the project.

For more than a year, teams from Georgia Tech, the Miller Hull Partnership, Lord Aeck Sargent and Skanska – working with the Kendeda Fund – have been analyzing and discussing site evaluations, design considerations and technologies needed to achieve the Living Building Challenge 3.1 certification.

The building will be up to 43,000 square feet of interior and exterior space, according to Steve Swant, Georgia Tech’s executive vice president for administration and finance who has been a point person on the project.

The building should be substantially completed in early 2019 with a Living Building Challenge 3.1 certification expected in 2020. Tobe certified under the program, a building must meet all the program requirements over a full 12-month period of continued operations and full occupancy.

Dena Kimball, one of Diana Blank’s two daughters, is the executive director of the Kendeda Fund, and she credited her mother for realizing her vision of philanthropy.

“Today’s building launch represents a big milestone for the Southeast and Georgia Tech,” she said. “My mom, Diana Blank, has shown the powerful impact philanthropy could have to change the world.”
Kimball went on to say that Georgia Tech is the “ideal partner” to implement the Kendeda Building, and she applauded Peterson for his commitment to apply lessons learned from this project to future ones on campus. 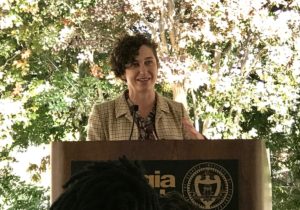 “Together we hope to transform how the region thinks, builds, lives and learns,” Kimball said. “From day one, Tech has embraced the Living Building Challenge enthusiastically, and they are already using it as a springboard to examine other projects across campus.”

Kimball said that with climate change, the Living Building can become a “catalyst for bold and energizing leadership.” There will be more than 200 firms involved in designing and constructing the Kendeda Building, and they will be part of the journey to transform the way we design and building structures in the future.

Scott Cannon, executive vice president of Skanska in Atlanta, called the Kendeda Building a one-of-a-kind “snowflake” for the construction industry.

“There’s never been one like this constructed in the Southeast,” Cannon said. “Most living buildings have been built in the Pacific Northwest, and you can’t compare that climate to the one in the Southeast” with its humidity and heat.

To learn more about the project, click on these two sites: livingbuilding.gatech.edu and living building.kendedafund.org. 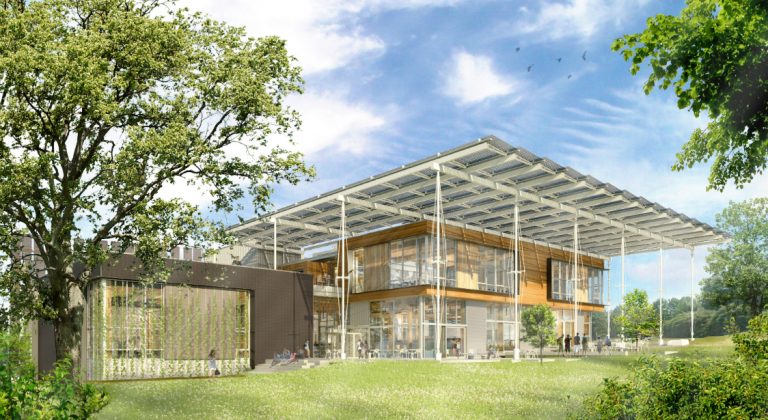 Rendering of the Kendeda Building, which should open in early 2019 (Special: Kendeda Fund) 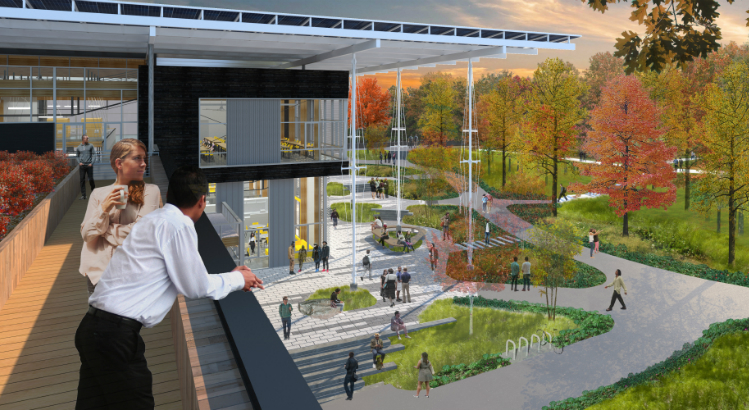 Rendering of the Kendeda building from the roof deck (Special: Kendeda Fund) 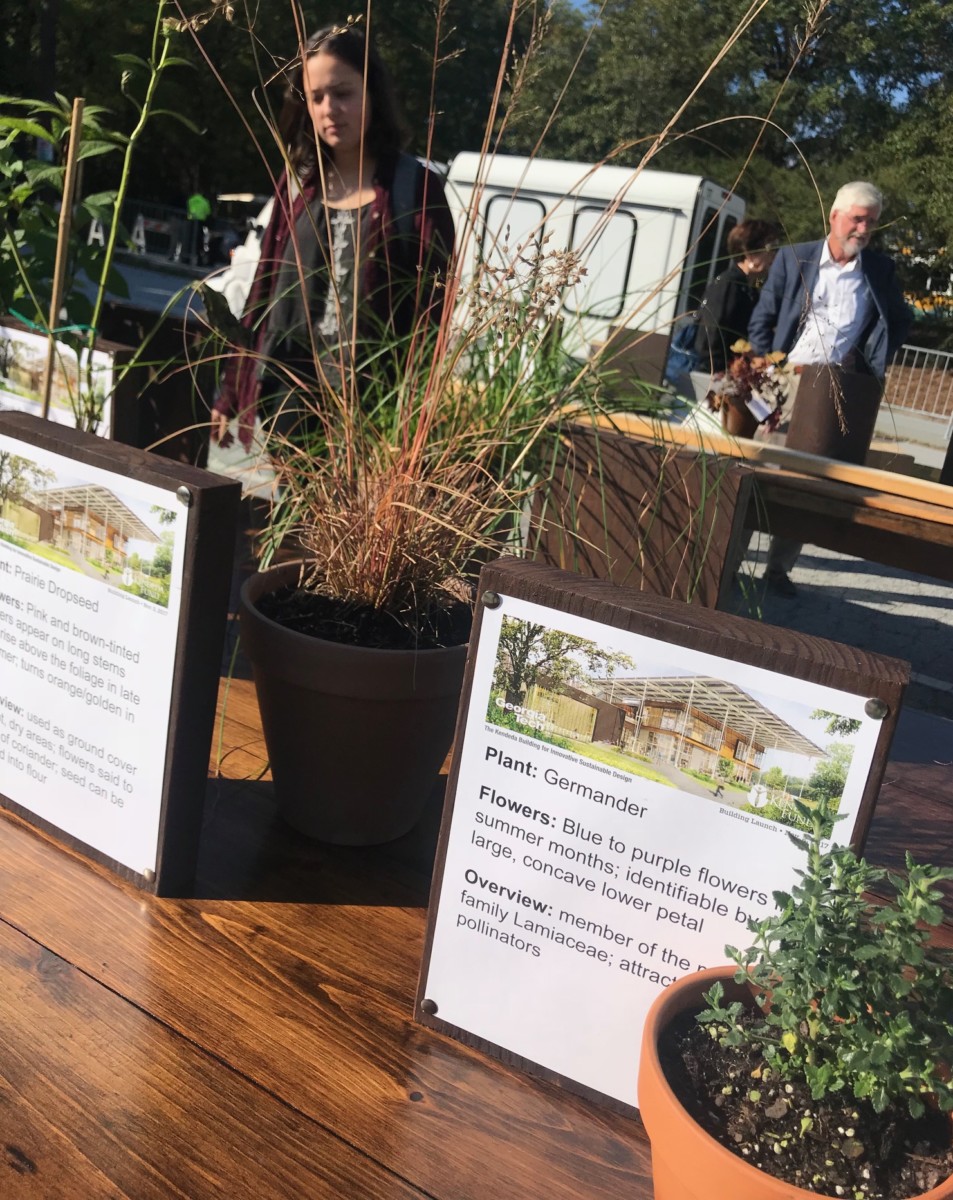 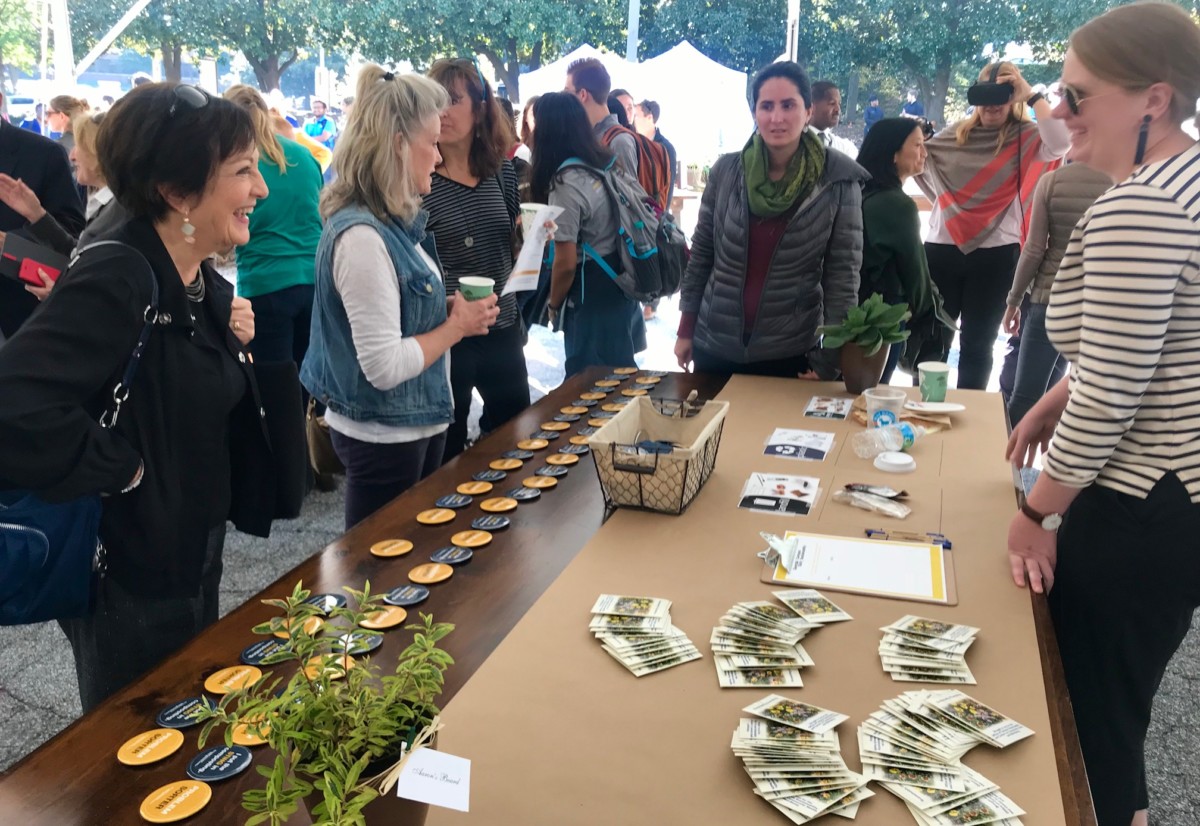 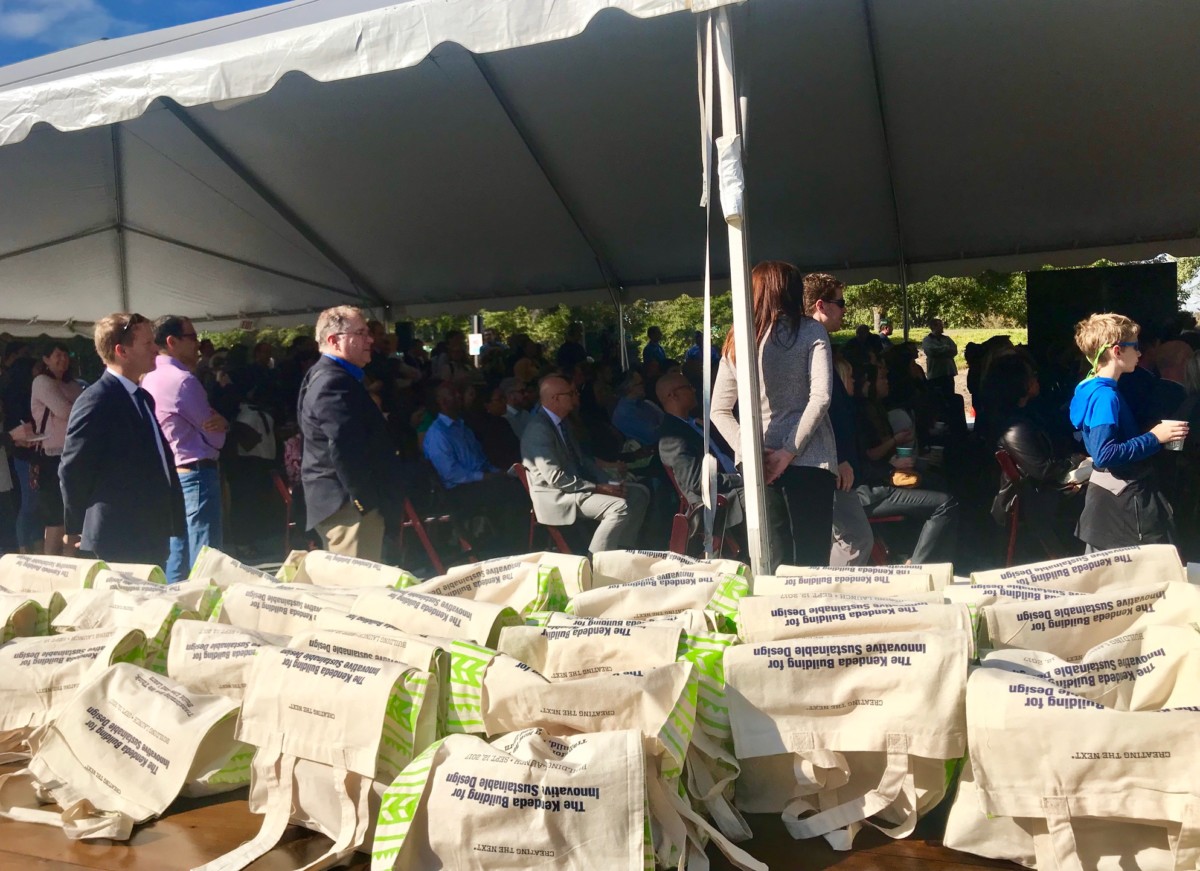