The fate of a proposed strip mine near the Okefenokee Swamp represents environmental and national security issues at stake in the Senate runoff in Georgia. 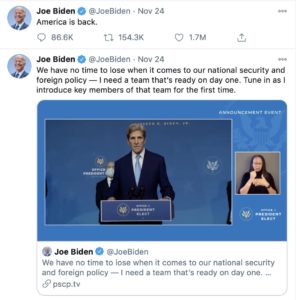 President-elect Joe Biden highlighted national security and foreign policy in a tweet that announced John Kerry as his pick to serve as a special envoy on climate issues. Credit: twitter.com

A Democrat-controlled Senate could be expected to confirm President-elect Biden’s cabinet-level nominees who, in turn, could restore environmental protections for the land that’s to be mined. The protections were eliminated in June in a rule-making action that fulfilled an executive order issued in 2017 by President Trump to revise the federal Clean Water Act.

A Republican-controlled Senate could approve Biden’s nominees for secretary of defense and administrator of EPA, two positions directly involved in rule-making for the Clean Water Act. The likelihood of this happening would be part of a three-dimensional game of political chess between the administration and likely Senate Majority Leader Mitch McConnell, if GOP control of the chamber continues.

Control of the Senate rests with Georgia voters. Democrats would have a majority if Georgia voters choose both Democratic candidates and reject both Republican incumbents.

Along with the hard power of Senate control is the soft power that Georgia senators wield among their colleagues regarding the proposed strip mine in Southeast Georgia. An historic practice is for senators to defer to the wishes of the two senators from a state on affairs that affect that state. Any opposition to the strip mine that’s voiced by Georgia senators could influence matters related to the proposed mine. 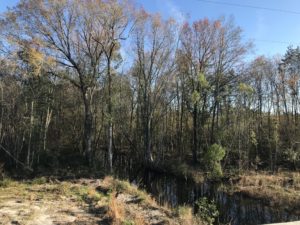 Little Suwanee Creek disappears into the trees and brush that grows in a sunny area on the edge of the Okefenokee Swamp. Credit: David Pendered (Feb. 22, 2020)

Meanwhile, a new wrinkle has emerged in the debate over the proposed strip mine.

On Dec. 10, the U.S Commerce Department published a notice of request for public comments related to an investigation into the national security issue of the supply of a material that can be created from the sands to be mined near the Okefenokee Swamp. The deadline for public comment is Jan. 21, 2021.

The refined product is sponge titanium, which can be processed from mineral sands of the type to be mined from near the swamp. Sponge titanium is used in military and civilian products. The U.S. imports nearly all its titanium sponge, from Russia and Japan. According to the request for comments, the commerce secretary reviewed the import situation and determined that: 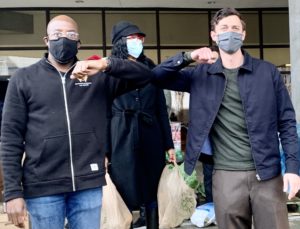 A working group has permanent members representing the departments of commerce, defense, interior and state. Other federal entities rotate in and out as their expertise is needed, according to the notice on the Federal Registry.

As the situation with the proposed strip mine now stands, the only approval needed is from the Georgia Department of Natural Resources. The federal government has withdrawn from the review, because of the June revision of a provision of the Clean Water Act. The Oct. 14 interim determination issued by the U.S. Army Corps of Engineers states:

Regardless of the outcome of Georgia’s Senate runoff, Biden has the authority to overturn Trump’s executive orders, according to an October report by the American Bar Association. This would seem to include the executive order regarding the Clean Water Act. 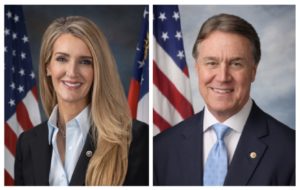 The ABA determined, in a non-binding observation, that a president can overturn an existing executive order by issuing a new one. However, creating a new rule to replace the one implemented by the Trump administration seems likely to require full buy-in from the two agency heads, defense and EPA. The working group on the titanium sponge issue could have a voice. And, even if Biden calls for a new rule, it may not come quickly, if a replacement rule takes as long to implement as the one crafted by the Trump administration – 40 months.

The issue at the Okefenokee Swamp is a proposal to mine sand that contains titanium minerals from a site of about 600 acres.

A 1989 report by the U.S. Geological Survey observed of the area from which the sand is to be mined:

The process being proposed is to remove a layer of earth, extract the exposed layer of sand that contains titanium minerals, and spread earth over the area that’s been stripped of the sand.

Opponents of the proposed strip mine contend that it will threaten the ecological integrity of the swamp. The Okefenokee is the largest blackwater swamp in North America and one fear is the strip mining process would allow intrusion into its waters.