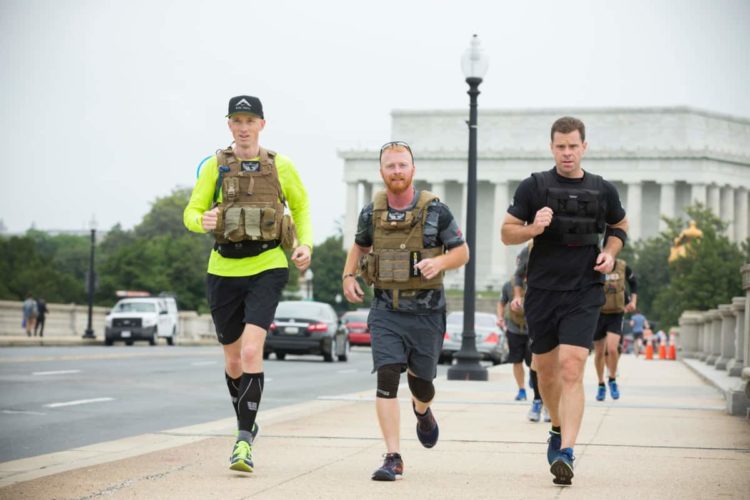 Seventeen members of Shepherd's Men ran a half-marathon in Washington on Tuesday to raise awareness, and funding, for the Shepherd Center's program to help wounded vets. Special to SaportaReport

As the nation prepares to honor those who died in service to the country, a team of former service members and civilians affiliated with the Shepherd Center are running eight consecutive half-marathons to raise awareness and funding for veterans still recovering from injury. 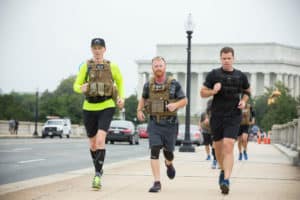 Seventeen members of Shepherd’s Men ran a half-marathon in Washington on Tuesday to raise awareness, and funding, for the Shepherd Center’s program to help wounded vets. Special to saportareport.com

The Shepherd’s Men started their journey Monday in Shanksville, Penna. This is the site of the Flight 93 National Memorial, which marks the crash site of one of four airliners hijacked during the Sept. 11, 2001 terrorist attack on the U.S.

The runners conclude the event Memorial Day, May 29, with a run into the Shepherd Center in Atlanta.

Each day, the 17 team members are scheduled to complete a 22-kilometer, 13.1-mile, run. Each runner is to wear a 22-pound flak jacket. The number 22 is significant. In symbolizes the average of 22 deaths-by-suicide each day by a military veteran.

There was one exception: On the first day, in Shanksville, each member wore 93 pounds of weight to honor the 40 passengers and crew of Flight 93 who thwarted a planned attack on the U.S. Capitol.

“We run to share the burden our veterans carry every day as a result of their time in combat,” Travis Ellis, Shepherd’s Men co-founder and 2017 Citizen Heroes Award recipient, said in a statement. “It is our duty and privilege as Americans to fight for our heroes and their service to our country.” 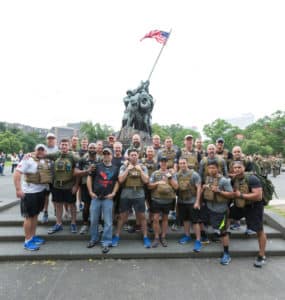 The half-marathon to raise awareness and funding to care for wounded vets started at the U.S. Marine Corps War Memorial, which depicts an historic World War II battle and commemorates all the marines and their allies who have given their lives since 1775. Credit: Special to saportareport.com

The event intends to raise awareness of the treatment options, and suicide prevention programs, for veterans suffering from traumatic brain injury and post-traumatic stress disorder.

Their goal is to raise $2.2 million to help fund the expansion of Shepherd’s SHARE Military Initiative. The Shepherd’s Men have raised a total of $1.4 million since 2014, according to a statement.

The SHARE Military Initiative  provides assistance, support, and education to service members and their families during their recovery treatment and beyond, according to a page on Shepherd’s website.

Sheperd describes the program as:

The runners this year are active, medically retired and honorably discharged servicemen and civilians. 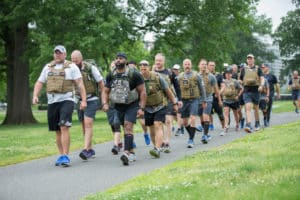 The Shepherd’s Men completed a 22-kilometer course in Washington wearing 22-pound flak jackets. They did not run the entire distance. Credit: Special to saportareport.com

This is the fourth annual run. For the third year, HD Supply is the title sponsor of the event. Chairman and CEO Joe DeAngelo is an honorary team member and is to run each day remotely, also while wearing a 22-pound flak jacket.

“We are honored to support the Shepherd’s Men and their steadfast commitment to help our veterans re-acclimate successfully to civilian life,” DeAngelo said in a statement. “As one HD Supply Family, we proudly fight for our servicemen and women who selflessly fought for the freedoms we enjoy every day.”

Previous Article
Southern Co.’s Tom Fanning: Decision on Vogtle expansion likely to be made in August
Next Article
Anti-Trump protests cost Atlanta taxpayers up to $16 million for public safety