Showing up in unexpected places, Kemp signals an anticipated rematch 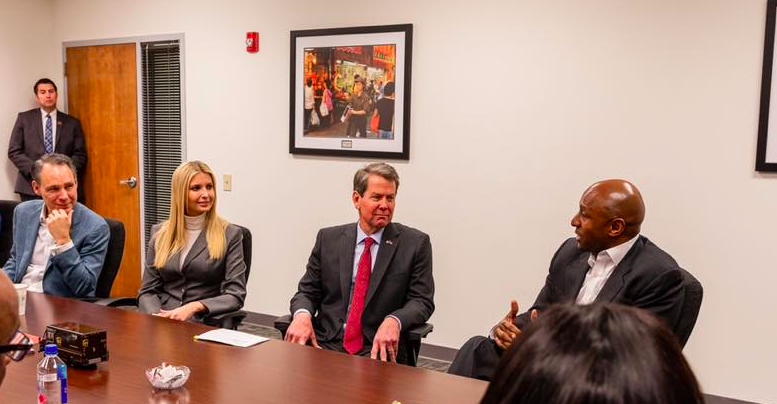 Every year since 1965, survivors of the Holocaust and their families have gathered at Benjamin Hirsch’s somber Memorial to the Six Million in Greenwood Cemetery to observe Yom HaShoah, the day of remembering those who died in the Holocaust.

As is customary, Ambassador Vornai Shorer, the Israeli consul general in Atlanta, attended this year’s observance, seated on the front row near Gov. Brian Kemp and his wife, Marty.

Which isn’t customary at all. Governors sign proclamations and send messages of respect, but in this century at least, Kemp is the first to attend this annual ceremony. He couldn’t resist a swipe at the New York Times in his greetings to Shorer, which may have fallen flat with many in this audience. But he was full-throated in his commitment to Israel, including the continued purchase by the state of Israel Bonds. Most importantly, he was there.

It’s not customary, either, for governors to show up at meetings of the organization of county governments, but Kemp attended ACCG’s annual meeting last week and swore in the group’s new officers.

Members of the Georgia Water Coalition were also surprised earlier this year when the governor’s point person on natural resources issues contacted them about attending the spring meeting at which they review what happened in the past legislative session. The Kemp staffer attended and got what was described as a very cordial reception.

None of these instances of outreach have anything like the bandwidth that Kemp’s signing on Tuesday of the “heartbeat” abortion bill will have. But they tell us a lot about Kemp’s political realities and how he’s facing them.

Although he served in the state Senate and as secretary of state, Kemp came into office as more of an outsider than either of his Republican predecessors. His decisive victory over former Lt. Gov. Casey Cagle in last year’s Republican primary left Kemp in a position after the election in which he owed very few people, and very few people owed him. Hence the need for much more outreach, to sort out exactly who this administration can work with.

These incidents also point, as clearly as Stacey Abrams’ announcement last week that she won’t seek the nomination to oppose U.S. Sen. David Perdue and the swipes she continues to take at Kemp, to the governor’s race which is taking shape for 2022.

Abrams has wanted a rematch with Kemp more than any other race.

“I am not delusional. I know I am not the governor of Georgia — possibly yet,” Abrams said last week at a fundraiser for Democratic women in Houston.

Kemp in the early months of his administration has positioned himself in a way that says he also anticipates a rematch with his 2018 Democratic rival, and that it is not to be taken lightly.

Kemp’s office has recruited “citizen sponsors” to surround the governor when he signs the abortion bill, fulfilling, in a carefully choreographed way, a promise made to his base in the last election. If for no other than demographic reasons, he needs more than that base vote to win the next one.

Kemp’s push to get a teacher pay raise early in his administration and his willingness to make election law changes addressing some of the concerns raised in the last election, albeit in a bill on which the two parties were sharply divided, indicate a desire to position the next race on different terms. Nothing Kemp has done so far signals that he expects a different opponent.

That foreshadows another race which breaks down sharply along ideological grounds on issues like abortion and gay and lesbian adoption. This time around, it will be one in which Kemp can use the advantages of incumbency to trim off the potential Democratic vote. Making new friends and keeping the old can be a tricky proposition in these highly partisan times, but it is likely to be Kemp’s surest path to reelection.

There is, of course, the ongoing possibility Abrams could wind up as somebody’s 2020 Democratic running mate. But just a few months after the last governor’s race, the outlines of the next one appear to be taking shape.