Since George Floyd’s death, ATL ponders its past, considers an equitable future

In steps big or small, the year since George Floyd’s death has been a moment in metro Atlanta of acknowledging past bad behaviors, and also of taking responsibility to construct pathways to a more equitable future. 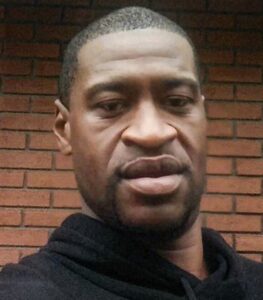 These conversations can be a challenge. One example is unfolding at the University of North Carolina, where the offer of a lifetime teaching position was withdrawn from journalist Nikole Hannah-Jones at the behest of conservatives who oppose the concepts of the “1619 Project,” for which she won the 2020 Pulitzer Prize for Commentary, according to a May 19 report by ncpolicywatch.com.

Emory University has faced its challenging past and that story is among those being told in metro Atlanta.

At Emory, scholars at the highest level stepped up to acknowledge a prestigious institution’s dark past: 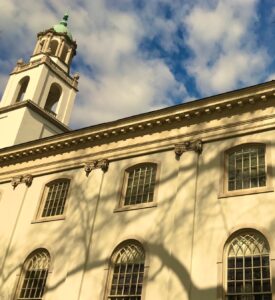 Emory University has acknowledged that it is built on lands taken from the Creek Nation and the original campus, in Oxford, was built by slaves. Credit: Kelly Jordan

Some stories arose from unexpected sources.

Through the Atlanta Fed, Anh Auyenng came forward to show that life lessons learned while growing up with Cambodian-American parents who run their own donut business in California are similar to those learned by the child of an entrepreneur family in Atlanta: 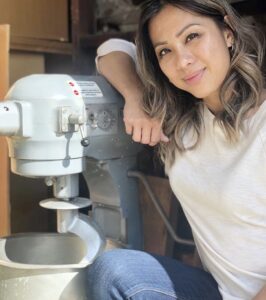 Through a recognition by American Rivers, the sewage spills that plague predominately Black south DeKalb County were brought to the forefront of the nation as an environmental injustice resulting from inaction by the county and lax oversight by state and federal environmental authorities:

And through the persistence of Decatur’s Beacon Hill Black Alliance for Human Rights, which campaigned three years for the removal of a Confederate monument from the Decatur Square before then DeKalb Superior Court Judge Clarence Seeliger ordered it removed in June 2020. The group’s focus now includes mentoring young organizers, as two co-chairs describe in this week’s guest column in SaportaReport. 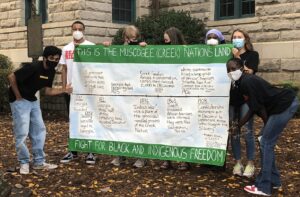 These examples are just a smattering of the results of truth-telling programs that have unfolded largely online in this era of Covid seclusion. Many events have been obscure because of the pandemic, but that doesn’t mean seeds have fallen on hard ground.

Nor do these attempts at forgiveness and reconciliation erase the trauma of a crime wave sweeping the nation and parts of the Atlanta region. Atlanta, as the urban core, gets the most attention for an increase in the number of shooting incidents and murders, compared to last year. Numbers that don’t get as much attention are those that have dropped, since 2019, in the year-to-date number of reported rapes (down 28%); robbery (down 29%); and burglary (down 50%), according to the Atlanta Police Department’s weekly crime management statistics for the week of May 15. Another stat that hasn’t garnered attention: domestic violence is up 150%. 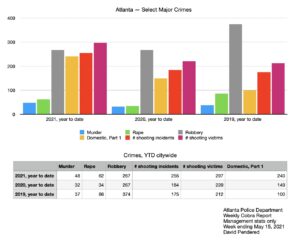 A spike in domestic violence is one of the untold stories of Atlanta’s crime statistics. Credit: APD, David Pendered

Looking ahead to ongoing conversations, the Atlanta Fed continues its work June 2 with the sixth installment of the virtual video event, “Racism and the Economy: Focus on Entrepreneurship.” Panelists are to discuss the impact of racism on entrepreneurs of color. Nicole Childers, executive producer of Marketplace Morning Report, is to moderate the event and Atlanta Fed President Rafael Bostic is to speak on the role of the Fed in this market and deliver closing remarks.

Emory is accepting proposals from scholars and the general public alike its fall symposium, “In the Wake of Slavery and Dispossession: Emory, Racism and the Journey to Restorative Justice.” The symposium is open to everyone and the deadline for proposals is June 18.

Emory President Gregory Fenves has written that the symposium is part of the university’s effort to deal with its past, as is Emory’s decision in February to join the Universities Studying Slavery consortium. The 75 member institutions include the University of Georgia and the University of North Carolina – which itself is grappling with an issue. 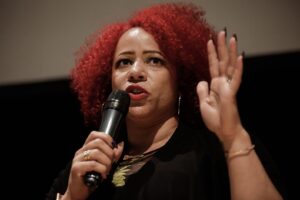 UNC has withdrawn an offer of a tenured professorship from Nikole Hannah-Jones, who conceived The New York Times’ “1619 Project.” The project puts the founding of the nation in the year enslaved Africans arrived in Virginia and reexamines ways the nation’s history is viewed and taught, to rescind the offer.

The report says conservatives who object to the project influenced UNC’s trustees to withdraw the original offer of tenure, which is a lifetime appointment. Hannah-Jones was offered a fixed, five-year contract after the permanent position was rescinded, according to the report. The situation is ongoing.

Previous Article
The return of “Uncle Billy”
Next Article
With a new administration, Spaceport Camden’s liftoff looks in doubt