Pity the poor down-ballot Republican, caught in the crossfire of a national political battle. 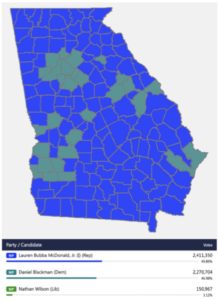 Democratic challenger Daniel Blackman forced incumbent Republican Lauren ‘Bubba’ McDonald into a runoff for a statewide seat on the state utilities commission with a vote that matched the Democratic turnout in other races. Numbers are as posted Wednesday at 3:27 p.m. Credit: Georgia Secretary of State, David Pendered

The happiest Republican in the state as of Tuesday afternoon was probably Public Service Commissioner Jason Shaw. Last week he managed to get just a hair over 50 percent, avoiding a runoff with Democratic challenger Robert Bryant. So he wasn’t affected by Secretary of State Brad Raffensperger’s announcement Wednesday that the runoffs for state offices scheduled for Dec. 1 have been consolidated with the Jan. 5, 2021 U.S. Senate runoffs.

The unhappiest Republican must have been Public Service Commissioner Bubba McDonald, who failed last week to avoid a runoff with Democrat Daniel Blackman. At least, the perennially chipper McDonald had a right to sing the blues.

If the runoff had stayed on Dec. 1, McDonald would have faced a challenge as smooth as his own voice.

Democrats in Georgia may be woke, but they aren’t awake enough to win an ultra-low turnout race when most voters will be distracted by Christmas shopping and the big Jan. 5 runoff. That’s the kind of race Republicans nearly always win.

Instead, McDonald has to campaign for another month. At the very least, the date change throws a wrench in his holiday plans. Worse, it ads an element of peril to what should have been an easy putt.

Turnout in the Jan. 5 runoff is going to be much, much larger than it would have been on Dec. 1. Most Jan. 5 voters won’t be tuned in to the PSC race, but they’ll be able to see which candidate has a D after their name, and which has an R. If Blackman can get a significant chunk of the votes for Raphael Warnock and Jon Ossoff in the two U.S. Senate races, he has a shot. Even if the Republican Senate candidates have a big day and McDonald gets pulled along with them, it’s going to cost a lot more time and money. 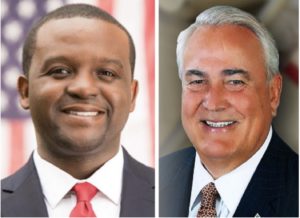 The candidates in a runoff for a seat on state utilities commission, Daniel Blackman (left) and Lauren ‘Bubba’ McDonald, are to appear on the Jan. 5, 2021 ballot. Members of Georgia’s Public Service Commission are elected statewide. Credit: facebook.com

The date change doesn’t affect the runoff between Kwanza Hall and Robert Franklin to fill out the last few weeks of John Lewis’s term in the 5th Congressional District. If it had been moved, there would have been essentially no term left to run for.

Early voting in this race started on Monday, so it would have been difficult to turn things around. Instead, on Dec. 1 we’ll have the ultimate test of how low turnout can get, for the only race on the ballot, to fill out the last few weeks of a congressional term.

An earlier version of this story said the date change also affects the special Democratic primary runoff between Sonya Halpern and Linda Pritchett to fill Nikema Williams’ state Senate seat, as well the district attorney’s race in Clarke and Oconee counties and a Polk County Commission race. We’re told the date for these runoffs won’t be changed.