A federal agency is providing the latest sign of fading times in rural Georgia. Six areas could lose their status as federally designated metro areas because their populations may be too small to meet a new threshold. 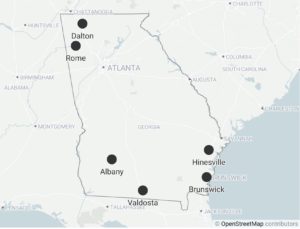 These six cities may lose their federal designations as metro areas, depending on a decision from a federal agency and their populations as recorded by the 2020 Census. Credit: © OpenStreetMap contributors, Maggie Lee

Two of the six areas are in North Georgia and four are in South Georgia: Dalton and Rome; and Brunswick, Hinesville, Valdosta and Albany, according to information filed with the federal Office of Management and Budget and posted on regulations.gov.

These areas had enough residents to qualify as metro areas when the threshold was 50,000. They may not make the list when the minimum count is raised to 100,000 residents, as in a proposal now out for public comment by OMB. The comment period ends in 10 days.

These six regions have been struggling to keep their hand in the modern economy. The Legislature and Gov. Brian Kemp have kept a focus on encouraging the expansion of broadband in rural areas, in part to help these communities secure a future in the digital world. Internet connectivity is viewed as essential to rural economic development as electricity was in the New Deal era. 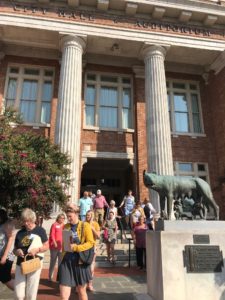 Rome’s City Hall and Auditorium was a vibrant civic center in the days before the COVID-19 pandemic. Credit: Kelly Jordan

Georgia’s lawmakers aren’t the only ones trying to bridge the digital divide when it comes to economic development. In Indiana, Vanderburgh County Commissioner Cheryl Musgrave posted a comment arguing for the expansion of Evansville, IN- Henderson, KY MSA. Musgrave cited the impact of telemedicine and telecommuting on where people reside and where their receive medical treatment, and where they work.

The designation of “metropolitan statistical area” is about more than just bragging rights, though such rights are at play – economic development entities in metro Atlanta are quick in their pitches to point out that the Atlanta-Sandy Springs-Roswell MSA is one of the most dynamic in the nation. The calling card can become a self-fulfilling prophecy.

The MSA moniker also factors into business decisions over whether a company chooses to offer its products, or possibly locate a facility, in a region. For instance, the Bureau of Labor Statistics offers economic snapshots of MSAs that include per person income and spending, unemployment rates, and other economic conditions. 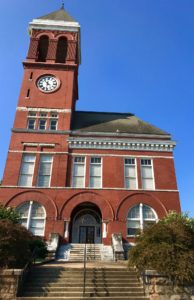 Consider a company that reviewed unemployment statistics in deciding whether to open a facility in Albany or Brunswick. The BLS figures show a greater proportion of Albany’s workforce was unemployed in December (7%, preliminary) than was unemployed at the same time in Brunswick (5.6%, preliminary). BLS would not produce this type of report about the two cities if they are cut from the MSA list.

The current minimum size of an MSA has been unchanged for some 70 years. But times change. And various factors that have become apparent since the last update, in 2010, have prompted several rule changes to be recommended.

The proposals were submitted by the Metropolitan and Micropolitan Statistical Area Standards Review Committee, which worked at the behest of the OMB. OMB intends to review the public comments and reach a decision on what changes, if any, are to be made. The new standards are to take effect with the results of the 2020 Census count, which are to be released before the end of this year.

Previous Article
Carol Tomé on becoming CEO of UPS: ‘This was my calling’
Next Article
Ballot filling up for Atlanta City Council President