Size shaming in Olympic sailing: A 1996 contender from Savannah comments

As the Tokyo Olympics mark the end of the last sailboat class for big men, a Savannah man who almost sailed the boat for the U.S. in the 1996 games portrays the move as boneheaded. 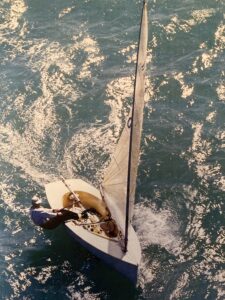 Eric Oetgen, still of Savannah, weighed 210 pounds when he campaigned in Miami for the Finn slot on the 1996 U.S. Olympic Sailing Team. Photo courtesy of Eric Oetgen

“What’s wrong with the Finn? Nothing,” Eric Oetgen said in an Aug. 6 phone call. Oetgen made the U.S. Olympic Sailing Team for three years in the Finn, but had a bad regatta and lost his place the weekend the ’96 team was chosen.

Size shaming has nothing to do with ending the Finn class that debuted in the 1952 Summer Olympics in Helsinki, according to the sport’s governing authority.

It’s just part of the evolution of Olympic sailing, according to World Sailing. In announcing a mixed-doubles class that had effectively knocked the Finn out of its last chance to remain an Olympic class, World Sailing observed:

To reach these goals, three of the 10 classes in Paris 2024 aren’t proper boats – windsurfers and kiteboarders use vessels that look like surfboards. This change continues an effort to make the Olympic sport seem more accessible, including a name change from yachting to sailing for the 2000 games. 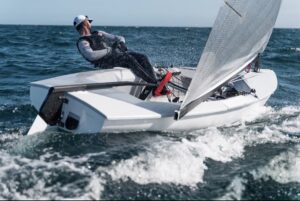 Tremendous physical strength and endurance are needed to win in the Finn. Oetgen said he weighed 210 pounds when he campaigned the Finn. That’s 25 pounds heavier than the average weight of sailors in the 2016 Olympics in Rio de Janeiro, the latest data available. Take the Finn sailors out of that group and the average weight seems likely to plummet.

Men don’t own the franchise on strength, and the Finn class offered to rig the boat for women of about 155 pounds, in hopes of remaining in the games. World Sailing rejected the bid.

Argentinian Finn sailor Facundo Olezza (who shows the strength of Finn sailors on videos posted to his Facebook page) asked the president of the International Olympic Committee in May why big men are being moved off the slate of sailing, according to a report in sail-world.com: 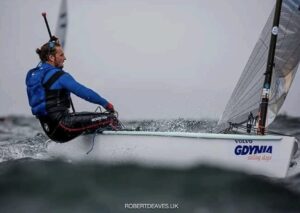 Argentinian Finn sailor Facundo Olezza asked the head of the IOC why men of his size have been, essentially, declared too big to compete in future Olympic sailing events. Credit: robertdeaves.uk via facebook.com/facundo.olezza

Strength and weight are particular to the Finn because the sailor has to pump the boat when the wind is from behind, rocking the boat vigorously from side to side to force her to go faster. Weight is so important that some sailors wear jackets filled with weight, meaning they have to be strong enough to manage the extra pounds. As five-time Olympic medalist Ben Ainslie, of Great Britain, said in a video showing the pumping technique:

Giovanni Galeotti is having none of that. In a comment on the World Sailing’s discussion of Olympic boats and equipment, Galeotti – no information beyond his the name was published – chimed in:

Only sumo wrestlers (left) and Star sailors, a group that includes Paul Cayard, executive director of U.S. Sailing, will object to the move toward lighter sailors, a blogger wrote on the page of the sport’s governing authority. Credit: Wrestler, RF Vila, CC BY-SA 4.0 via Wikimedia Commons; Cayard, ussailing.org

Oetgen noted that the Finn is a launch pad for other major sailing platforms, a point borne out by Ainslie’s record in the America’s Cup, the world’s oldest international competition that’s still active.

“What the Finn class offers is a boat for the big men in our world, 200- to 250-pound men,” Oetgen said. “The Finn class has been the dominate single-handed sailor in the country, and if you come out of the Finn you go on to the Star or the America’s Cup or become a professional sailor, and become one of the best sailors in the world.”

Finn sailors gravitate to the Star because their weight helps keep the large sail plan from capsizing the vessel. Incidentally, the Star was eliminated from the Olympic class after the 2012 games. The Star’s bid to be chosen for the new mixed keelboat class for Paris 2024 does not appear on World Sailing’s short list. 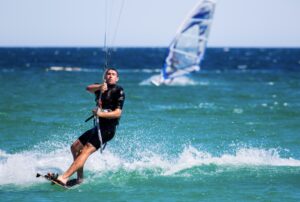 The ideal weight for a male kiteboarder and windsurfer is from 140 to 160 pounds, according to comments on a few blogs. Here, the kite pulling the sailor is out of sight, and a windsurfer is in the background. Credit: Zach Dischner via wikimedia

Ainslie retired from Olympic competition after London 2012, and went on to dominate the America’s Cup in a 2013 win declared by “The Wall Street Journal” to be “the greatest comeback in sports history.” Ainslie served as tactician on the team funded by Oracle founder, and billionaire, Larry Ellison. By this time, Ainslie had been knighted in recognition of the honor his medals brought to Great Britain – four gold and one silver.

Oetgen said his racing career is mostly behind him, though in 2018 he did beat a fleet of 34 Sunfish to win the Master World Championship. For now, he’s spending time with work and his family and teaching his daughter one of the things he does really well – make a sailboat go fast, especially downwind, at which he excelled.

“I asked her, ‘Can you feel how the boat moves faster when you move your weight forward?’,” Oetgen said.

Note to readers: David Pendered covered Olympic yachting from 1994 through the 1996 Summer Olympic Games, at venues in Miami and Savannah. He covered sailing in the X Paralympic Games, on Lake Lanier, when sailing was a demonstration sport and medals were awarded to the top three finishers – Great Britain, Canada and the United States.

Previous Article
Charlotte lawmakers want to abolish single-family-only zoning. Could Atlanta do the same?
Next Article
Thinking outside the curb lines

The story behind the historic headline ‘It’s Atlanta!’ announcing the city won the 1996 Olympics
Jason Marshall January 20, 2020 11:22 am

The story behind the historic headline ‘It’s Atlanta!’ announcing the city won the 1996 Olympics