Smyrna is poised to go against the grain in its efforts to retool its award-winning smart growth design of the downtown district. 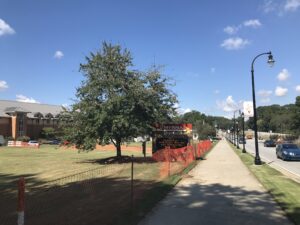 Smyrna plans to sell an acre of greenspace for construction of a beer manufacturing plant adjacent to Atlanta Road. (Photo by David Pendered)

Smyrna intends to remove a traffic circle and fountain that helped the city win a 1997 award from the Urban Land Institute. The new downtown plan also provides for the city to sell an acre of greenspace in the district to a beer manufacturer.

The traffic circle built in 1993 has been deemed a safety hazard. The fountain is broken and “not fixable unless at a huge expense,” Smyrna Mayor Derek Norton said at a June 3 meeting, according to minutes of the meeting. ULI recognized recognized both design elements in its 1997 award to Smyrna.

The Smyrna City Council is slated to vote Monday evening to adopt a redevelopment plan that calls for the removal of the fountain and traffic circle.

Other revisions include the sale of an acre of city-owned greenspace to make way for a three-story beer manufacturing plant that’s to offer an onsite place to drink. The agreed sale price for the greenspace is $600,000, according to a letter of intent. The site is adjacent to Atlanta Road and provides direct access to the Braves stadium and all the interstates in the vicinity – I-285, I-75 and U.S. 41. 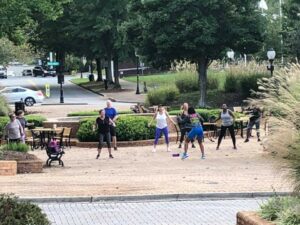 Smyrna intends to remove the fountain and the traffic circle that surrounds it as part of a plan to revise the downtown area. (Photo by Joan Martin, Smart Smyrna)

The proposed revision of Smyrna’s downtown area speaks to the broader issue of the revitalization of Georgia’s historic town centers. Programs including the Livable Centers Initiative, sponsored by the Atlanta Regional Commission, help fund the transformation of underperforming areas into more vibrant communities. These plans often provide a mix of greenspace, plus retail and commercial uses to promote a walkable area.

The Urban Land Institute recognized Smyrna in 1997 with its Public Award, along with private sector partners Knight-Davidson Co., for residential, and Thomas Enterprises, for retail and office, according to a report on ULI’s website. This was a significant year for the awards, with Chelsea Piers project in New York winning the Rehabilitation Award.

The Sizemore Group, headed by Michael Sizemore, created the award-winning designs for Smyrna Town Center and the Market Village. The company served as architect, programmer, planner and interior designer for design and site development, according to its website. Sizemore also provided the design for the privately developed Market Village. 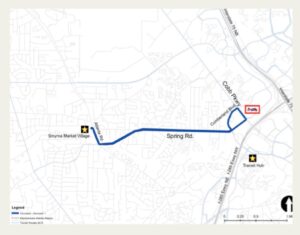 Smyrna’s downtown district is a few miles west of The Battery, home of the Atlanta Braves. The map shows the district’s proximity to the stadium and interstate highways in the area. (Image from Spring Road Corridor Study, a studio of Georgia Tech)

Now, Smyrna is poised to retool the plan along lines designed by Pond & Co., of Norcross, despite efforts by residents who oppose the proposals. These residents say they have been frustrated in their efforts to learn about the city’s plans and influence the city council to retain the existing design of the town center. 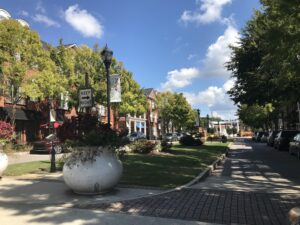 A similar situation has evolved around Smyrna’s plans to sell the greenspace to a company that intends to build a three-story brewery.

Questions about the transaction submitted by city residents under Georgia’s Open Records Act have not yielded robust answers, residents say. This is one example of the exchange between a resident and city official: 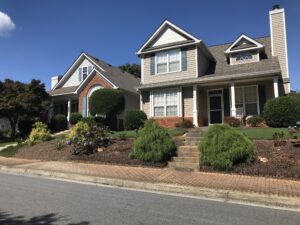 A campus publication at the University of Georgia offered a bit of information about StillFire Brewery opening in Smyrna. The report noted that the brewery’s co-founder, John Bisges (bachelors, 1993) and Smyrna’s mayor are UGA alums. The Sept. 1 report by UGAToday observed: 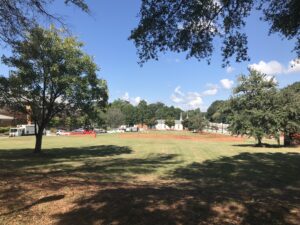 Smyrna has a letter of intent to sell an acre of greenspace to StillFire Brewery, which intends to build a three-story manufacturing plant between the building and Atlanta Road, barely visible on the right side. (Photo by David Pendered)

Previous Article
All Breast Cancers Are Not Equal: Different types require unique approaches to treatment
Next Article
‘The Velvet Underground’ – a worthwhile portrait of Lou Reed