Atlanta’s love of shopping is now on the historical record.

The Whitehall Street Retail Historic District, just added to the National Register of Historic Places, takes its name from the original name for south Peachtree.

“You could tell anybody, ‘Just meet me under the clock,'” said Precilla Ponder, referring to the landmark clock outside Rich’s that marks one end of the new historic district. Everybody knew the clock. 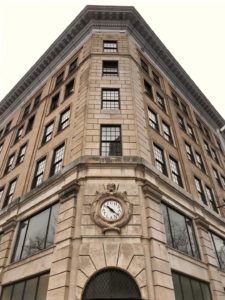 The clock at Rich’s. (Photo by Kelly Jordan)

She worked at the store as a college student in the early 1970s. First in the linens and later all over. If somebody was coming to pick her up from work, she’d be waiting under the clock.

Shoe-shopping at Buster Brown had already been a regular childhood event. Later, the Downtown shopping streets were the place to eat junk food not allowed at her home, like french fries and ketchup.

And on the day of the Rich’s Christmas tree lighting, she and her cousins spent a day out.

“Morris Brown used to play a game on that day … That’s the only reason I got to leave my grandmama’s house, was to go to the game,” she said, laughing. “And then that evening, we’d go to the lighting of the tree. It’s just something that everybody did.”

Generations of Atlantans like Ponder — and visitors from the suburbs — shopped and worked in the district. And it’s considered historic because of the American stories written in the stones and streets there.

The commercial story starts in the 1840s, just below where surveyors set a meeting point for the tracks of the Georgia, Macon and Western and the Western and Atlantic railroads. Shops and offices rolled out south of the tracks.

Any building that survived the Civil War would be torn down and replaced soon enough. Because this area was the first part of Atlanta to experience a commercial boom after it. 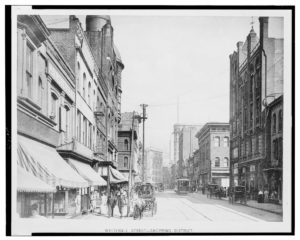 Rich’s was born there in 1867. Atlanta stores would later be joined by national chains like McCrory’s, Kress and H.L. Green.

Pre-car Atlanta history is written right into a street name.

“The reason it’s called Broad Street is because it was wide enough for a horse-drawn carriage to spin around in the street,” said Walter Brown, a development consultant who helped organize the historic district application.

“It just went blocks after blocks of what looks like an old European city,” he said.

For much of the 20th century, Atlanta had two main train stations, Terminal Station (opened 1905) and Union Station (opened 1930). This district was right up against both of them — and busy with the folks coming on and off of trains.

“There were people who would come from all over the southeast to shop in Downtown Atlanta at these stores,” said Kyle Kessler, an architect and south Downtown resident and activist who’s spent years researching the area. “And It was it was a combination of larger retailers, department stores and smaller retailers, specialty stores.”

It was a place to browse everything from farm implements to five-and-dime; hats, hairdressing and wholesalers, all in one area.

White-owned stores and white professionals could and did restrict Black customers. What exactly any given store did varied by time and place. Well within living memory, that included things like separate and unequal lunch counters. Or Black customers being directed to restrooms for Black staff.

Some Black shopkeepers and professionals did have premises in south Downtown, Kessler said. But the 1906 Atlanta Riot — also called the Atlanta Massacre because white mobs killed at least 25 Black people in and around the center of the city — convinced many Black businesses to move to Auburn Avenue. 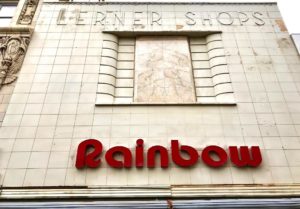 What constantly happened in the district was change, Brown said. By the 1920s, the area was getting viaducts: huge bridges to lift traffic over railroad lines. Then came elevators — buildings could be much taller. By the 1950s, all the office commuters and suburban shoppers were starting to need another new thing: parking decks.

In the 1960s, Civil Rights activists started pickets and sit-ins at segregated businesses, including those flagship shops Downtown. Martin Luther King Jr himself was arrested for trying to eat at the Rich’s Magnolia Room restaurant on Oct. 19, 1960. Some 80 AUC students were picketing outside.

Shopping went on strongly there for a while but declined slowly. Foot traffic declined with the train stations, which  were demolished in 1972.  The MARTA train has replaced an all-bus system that used to include a lot of transfers Downtown. The big stores closed over the years. More recently some small merchants have retired. And more people are shopping online anyway.

Anybody who can remember fancy shopping Downtown is going to be grey soon if they’re not already. And the original Pink Pig was donated to the Atlanta History Center as an artifact. 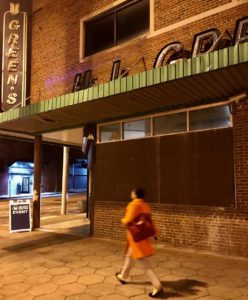 A lone pedestrian on what used to be a busy Atlanta shopping street. (Photo by Kelly Jordan.)

Yet much of the architectural fashion of earlier ages survives. It’s possible to get a sense of 1890s Atlanta — or even 1980s Atlanta.

Some of the former commercial buildings in the district have found new life as homes or offices. But in others, small businesses fill only a bit otherwise abandoned buildings.

The application for historic listing came from Newport, a developer that announced plans in 2018 to revamp about eight blocks both inside and outside the new historic district.

Overall Newport’s intention is to keep as many older buildings as possible, said a company spokesperson via email. “Some of the buildings have been neglected for many years and until the team undergo further planning and design, it is unclear what the future of those buildings are,” says the statement.

Historic district status doesn’t protect buildings. But the research that goes into a listing is itself a public resource. And owners can get tax credits for preserving listed buildings.

“It was the epicenter of everything,” Ponder said.