Today is the winter solstice.

But Southface, a non-profit that promotes green building practices, decided to celebrate the winter solstice six days early by highlighting some “outstanding energy-efficiency contributors in our community,” according to Judy Knight, who handles communications for the organization.

Although I attended Southface’s Winter Solstice party, I had to leave early before the awards were handed out.

So Knight graciously agreed to send me a recap of what happened.

Here is a rundown of the awards:

Dr. Brown holds the Ivan Allen endowed professorship at Georgia Tech in the School of Public Policy, shared the 2007 Nobel Peace Prize as a member of the Intergovernmental Panel on Climate Change, and has recently been appointed by the Obama Administration as one of three governors of the country’s largest utility, the Tennessee Valley Authority.

Southface honored her many regional and local contributions over the past year which have included serving as board chair for the Southeast Energy Efficiency Alliance (SEEA) where she authored an important report on the role energy efficiency can play in meeting the future energy needs of the Southeast.

Dr. Brown is also a good and long-term friend of Southface.

Award of Excellence in Sustainability: Georgia’s Department of Community Affairs

Michael Collins, Jennifer Adams and Ryan Meres accepted this award on behalf of Department of Community Affairs, which has accomplished much in this past year. Specifically, the award went to DCA’s ongoing work greening affordable housing; the department’s “Own-Home Program” that highlights sustainability in single family homes for first time homebuyers; DCA’s advocacy for the development of a provisional statewide residential green building code; and the department’s management of state’s radon contract, an important contribution to the health of Georgians. 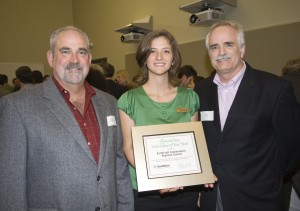 This group of 27 professionals has spent many hours to establish an advisory council to develop EarthCraft Communities and sustainable land development practices throughout the Southeast. They are experts in urban design, land development, environmental law and policy, civil engineering and more. Collectively they have worked long, long hours and have traveled extensively to develop this important advisory council.
Share
Tweet
Share
Pin
Pocket
WhatsApp
Buffer
Email
Reddit
0 Shares

Previous Article
As GWCC’s Graveline retires, officials pledge to keep politics out of search for successor
Next Article
Column: United Way’s 2009 chair to stay on for 2010