Virtually camouflaged by the shadows of trees hanging overhead, concrete barriers on United Avenue, near the Beltline’s interim Southside Trail, seemed to appear out of nowhere, a witness told SaportaReport after he saw a local pastor had smashed his car into the barricade.

Beltline officials, in a recent notice to neighbors, said they had “found structural issues with the [Beltline] bridge” that runs above United Avenue, according to Grant Park Neighborhood Association president Laura Keen. “One beam broke, and several others are bent,” she wrote in a Nextdoor post to the community obtained by SaportaReport.

The blockade, which was installed by City of Atlanta workers, had been installed to divert people away from where crews would ultimately be replacing the bridge, Beltline officials said in a message to the community on Sunday.

“The bridge was already scheduled for demolition as a part of future work on the permanent Beltline Southside Trail,” the email said. “However, due to this urgent safety issue, this timetable is being accelerated, and the bridge will be removed over the next few weeks.” 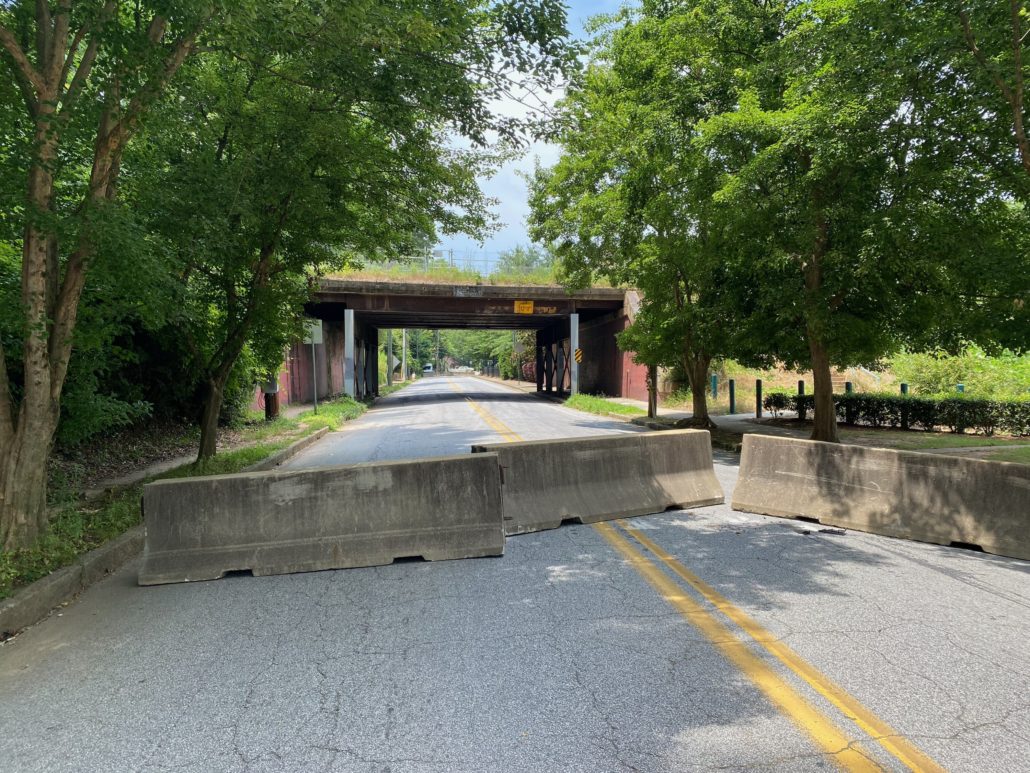 Beltline officials noted that trail users will be able to traverse the path until demolition work begins. “As we prepare for bridge removal, [Atlanta Beltline, Inc.] is working diligently to finalize an interim design solution that will provide continued connectivity for Southside Trail users. Once an interim solution for trail users is developed, ABI will hold a virtual public meeting to present the proposal.”

Keen’s message said that the bridge’s replacement is “anticipated to take four-to-six weeks.”

A Beltline spokeswoman said the street should be open to the public again in two or three weeks.

Scott Jones, a neighbor who was on the scene soon after Henry Gracz, the pastor, crashed his Kia Soul, said the concrete barriers seemed to blend into the scenery of the popular neighborhood thoroughfare. He wonders why there wasn’t more signage in place to warn motorists of the upcoming closure of this part of the street, adding that Gracz is fortunate the collision didn’t cause him serious injuries.

The bridge serves as a junction between Atlanta’s Grant Park, Ormewood Park and Boulevard Heights neighborhoods, and Jones noted that detour signs are in place “three and four and five blocks in advance on the Grant Park side.” In a text message, he added, “Only one or two on the Moreland Avenue side, and one of those is blocked by trees.”

Gracz has not responded to SaportaReport’s request for comment, and this story will be updated as information is provided.

(Header image, via Scott Jones: A man crashed his car into the concrete barriers near a bridge that’s part of the Beltline’s Southside Trail.)

After Atlanta BeltLine’s next round of construction, Northeast Trail will directly connect to Piedmont Park
Hannah E. Jones April 15, 2022 1:01 pm