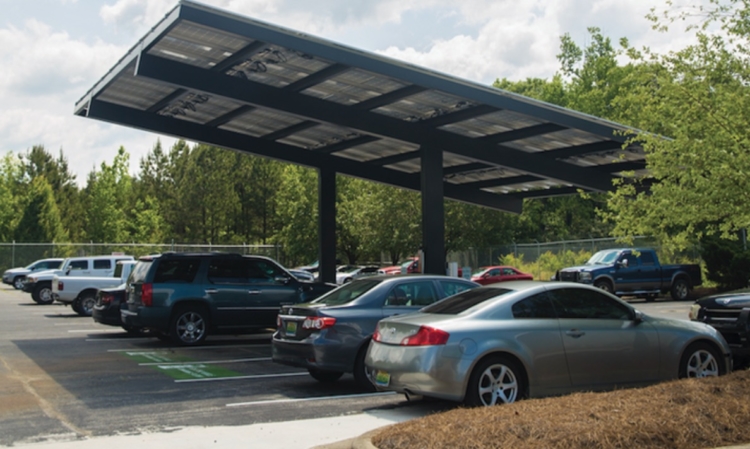 Before signing a contract with Solarize Carrollton-Carroll's installer, Southwire had installed in 2016 a solar-powered charging station for electric vehicles at a facility in Villa Rica. Credit: southwireblog.com

A Carrollton-based company that produces half of the wire and cable used to distribute electricity in the United States intends to install a solar panel array that’s so large it is to reduce the cost by up to 25 percent of all commercial and residential systems in the local Solarize program.

Southwire has signed an agreement with Creative Solar USA to install a solar panel array at its Thorn Customer Service Center. The deal came together as part of Solarize Carrollton-Carroll, which is among five ongoing bulk-purchasing campaigns for solar arrays now underway in the state.

Joining the solar program represents the company’s continued commitment to implementing its sustainability program. In September, Southwire was included on the Clean 13 list of entities and individuals who were honored for, “extraordinary efforts [that] have led to cleaner water in Georgia,” according to a report from the sponsor, the Georgia Water Coalition.

“This [solar] partnership is another way we are strengthening our commitment to sustainability,” Rich Stinson, Southwire’s president and CEO, said in a statement. “As we work toward being generationally-sustainable, two very important pieces of that future are our environmental focus and our commitment to our community. This partnership aligns with both.”

Part of Southwire’s purpose of installing the system at its customer service center, in Carrollton, is to showcase solar panels to others in the field, according to Jeff Herrin, Southwire’s senior vice president of environmental, health and safety (EHS) and quality.

“The project will reduce Southwire’s CO2 emissions and demonstrates a solar energy solution for our many customers and partners that visit the Thorn Center,” Herrin said in a statement.

Southwire expected to train up to 150 groups of contractors a year at the center, Southwire announced when it broke ground on the facility in 2016. The center opened in 2017. 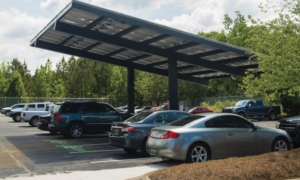 Before signing a contract with Solarize Carrollton-Carroll’s installer, Southwire had installed in 2016 a solar-powered charging station for electric vehicles at a facility in Villa Rica. Credit: southwireblog.com

The solar panel array to be installed by early next year is to offset about 25 percent of the electrical consumption at the 18,000 square foot customer service center, according to the statement from Southwire. The roof-mounted array is to provide 124.1 kilowatts of direct current electricity.

This reduction translates to reducing greenhouse gas emissions by 84 metric tons of CO2-equivalent, which the statement said provided the same environmental impact as planting 85,565 trees or removing the tailpipe emissions of 695 vehicles.

Solarize Carrollton-Carroll enjoyed strong community support when it was started earlier this year. More than 120 area residents signed a petition calling for more solar opportunities to be available in Carroll County. Interest was so high that a petition for the proposed bulk-purchase program garnered 50 signatures within 50 hours during its sign-up period in March. The outcome far surpassed the initial goal of 50 signatures within 30 days, according to an online petition that was live during the campaign.

The initial schedule called for all the solar panel arrays to be installed by the end of this year. The timeframe evidently was relaxed in order to accommodate Southwire’s large program.

“With the purchase of their solar system, Southwire has taken both residential and commercial participants to the lowest tier pricing, which will reduce the cost of all systems by 20 to 25 percent.” John Hinman, Chairman of the Solarize Carrollton-Carroll steering committee, said in a statement. “We continue to see Southwire’s engagement within our community, and it’s clear that they are acting on their commitment to sustainability.” 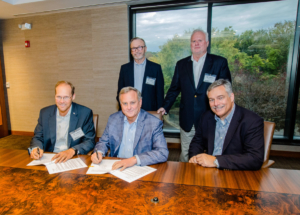 Southwire’s contract for a solar panel array is so large it’s to lower costs by up to 25 percent for other Solarize participants. Present at the signing in the front row are Russell Seifert, CEO of Creative Solar USA (left); Rich Stinson, CEO of Southwire; and Jeff Herrin, Southwire’s senior vice president for sustainability, environmental, health, safety and quality. In the back row are John Hinman, Solarize Carrollton/Carroll steering committee chair (left), and John Harding, COO of Creative Solar USA. Credit: Southwire

Previous Article
Reform of federal flood policy would reduce impact of disasters, spending after events
Next Article
Lessons from Amazon HQ2 – let’s invest in our state and create our own