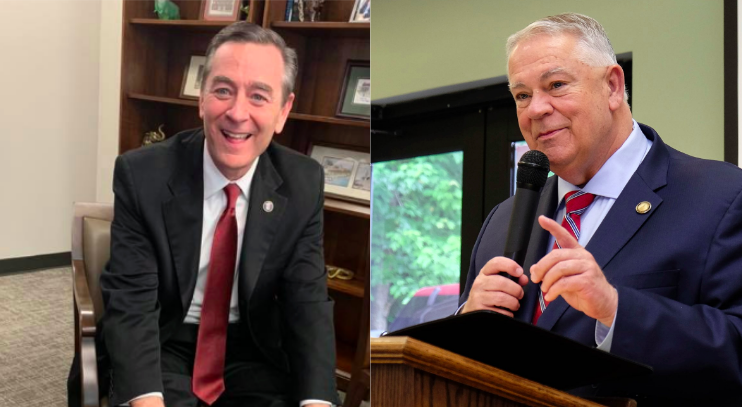 Gee, what a coincidence. In Tennessee, as in Georgia, the state house speaker has been embroiled in scandal this year, with calls for him to step down. Things couldn’t be working out much differently than they are in these neighboring states, however.

At least for now, Georgia House Speaker David Ralston has weathered charges that he abused his position as a legislator to drag out hundreds of court cases for his clients, many of them accused of violent crimes. The controversy generated some signage at the state Republican Convention, but a motion to reprimand Ralston, never made it to the floor.

A bill correcting some of the legal flaws he’s alleged to have taken advantage of was quickly drafted and passed in this year’s session. Ralston has said he did nothing wrong and has no intentions of resigning as speaker.

Tennessee House Speaker Glen Casada has already announced that he will be stepping down as speaker after a no-confidence vote by the House Republican caucus and a call by Tennessee Gov. Bill Lee for him to resign the post. On top of that, Casada has quit his day job as a pharmaceutical salesman.

Yet it is much harder to put into a sentence what Casada is accused of than Ralston. In fact, Casada’s fall has been more about what his chief of staff, who makes the sorcerer’s apprentice sound like a good hire, did than him.

Ralston has been speaker for a decade, and is widely viewed as the man who brought order out of the primordial chaos of the Republicans’ first House majority under the gavel of former Speaker Glenn Richardson. This has much more to do with how he has survived than the seriousness of the charges against him.

Casada was elected speaker in January, and in a short time got the media on his trail and, much worse, lost the confidence of the legislators who elected him. Right off the bat, he appointed as chair of the K-12 education subcommittee former coach who he knew had been accused by three former students of sexual improprieties. After defending the legislator as a victim of fake news, Casada backed off his support when a tape surfaced of the lawmaker apologizing to one of his victims.

That’s only a sidebar to a more complicated story of what caused his fall, but it has many of the elements of the larger story, in which the concept of glass houses and the power of the internet to amplify folly come into play.

After a protester who had been accused of throwing a cup of coffee at Casada was ordered to have no contact with his office, Casada’s chief of staff, Cade Cothren, produced an email seeming to show he had violated the order. This stone shattered Casada’s glass house with blinding speed.

First, Cothren was accused of doctoring the emails to frame the protester. Then came revelations that, while using “maladaptive coping mechanisms”  to ease the tensions of being a young, well-paid staffer, Cothren had snorted cocaine in a capitol office and made racial slurs and offensive sexual comments in texts and emails.

Casada was in on some of those texted conversations. He made only dumb comments — “Can I just touch????” in response to a woman’s photo, etc.— but it was enough to peg Casada to the story. Casada defended Cothren, then, once again, dumped him when the water got too hot. In the most direct blow to the speaker, a member of the House ethics committee accused him of trying to rig an investigation into the offensive emails. Legislators also began complaining about Casada sending “hall monitors” to keep watch on them, and the expenses he was running up. Casada threw in the towel and announced he was stepping down, although he postponed the resignation until after he returns from a European vacation.

Two different states, two very different situations. Among other things, the Republican Party in Tennessee has deeper roots and more branches than in Georgia, which meant Casada was gone fast when he lost the confidence of his caucus — no standing by your man in this Tennessee tune.

When you look at the bar complaints filed against Ralston, the AJC-WSB investigation and the follow-up investigation by former FBI agent Derek Somerville, the speaker still has a lot to answer for. But he’ll have much more time to come up with that answer than his neighbor in Tennessee.

Previous Article
Apartment prices rise as much as 25 percent, as talks continue on housing affordability
Next Article
An Art Challenge for Atlanta