After years of stops and starts, plans are moving forward to build a new park — one that will be bigger than Centennial Olympic Park — in the heart of Vine City, just west of the new Mercedes-Benz Stadium.

To be known as Mims Park, it received a major boost on June 13 when the Arthur M. Blank Family Foundation announced a challenge grant of $2.5 million to help with the plan.

The City of Atlanta is partnering with the Trust for Public Land to design and build what ideally will be a 16-acre park located within the streets of Joseph E. Boone Boulevard, Walnut Street, Spencer Street and Elm Street. 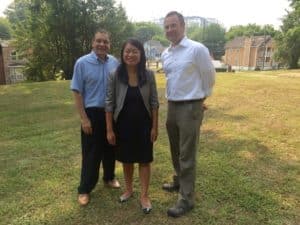 TPL’s Curt Soper and Jay Wozniak meet with Amy Phuong, the city’s commissioner of parks and recreation, at the proposed Mims Park in the shadow of the new Mercedes-Benz Stadium (Photo by Maria Saporta)

The park – which is being designed to also serve as a watershed facility to handle storm-water overflow — is expected to cost at least $30 million.

The cost of the water capacity relief facility is expected to be at least $16 million.

The Trust for Public Land is responsible for raising the private dollars for Mims Park.

Penny McPhee, president of the Blank Foundation, said the partners are committed to building “a spectacular new park on the westside.” She added that new parks are a wonderful way to connect a neighborhood.

The land where Mims Park will be located is now almost vacant and owned by the city. Most of the homes that used to stand on that property were acquired by the city and torn down after they were damaged in the 2002 flood.

The city’s Department of Watershed will be responsible to clean up contaminated soil on the site, and the property east of Vine Street – the low point of the land – likely will be where the water facility will be located. Several people compared the project to the Historic Fourth Ward Park that also has a storm-water pond feature surrounded by green space and paths.

“It’s going to have the same kind of green infrastructure function,” said Curt Soper, TPL’s state director for Georgia and Alabama. “We are still working through some of the issues of what the water feature will be.” 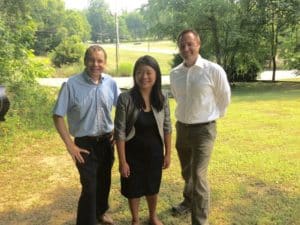 Amy Phuong, commissioner of the City of Atlanta’s Department of Parks and Recreation, said that because the Historic Fourth Ward Park has been so popular, it will be a similar development.

“It will be an integrated park design,” Phuong said. “We are still in the early stages of the design. Our objective with this park is several things – high quality design, storm water management, soil remediation and the last piece is insuring it honors the history of the community.”

Phuong said the partners are working with the National Monuments Foundation on the design elements as well as the best way to recognize the history of the westside communities.

“We are now investing in the future,” Phuong said. “We really have this opportunity to take leading experts to create a new park in an area of the city where we have historically been under-parked.”

The Blank Foundation is providing three different grants. The first $250,000 grant already has been given to TPL for the design costs. Then it has made a $450,000 matching grant that will be paid when $450,000 has been raised.

The final grant of $1.8 million will be made as the “last money in” for the park.

Jay Wozniak, urban parks director of TPL’s Georgia office, said the total cost of the park design will range between $10 million and $15 million, and the Trust will be responsible for raising those funds.

Currently the city has 13.1 acres, and there are some outlying parcels it would like to include so it would eventually become a 16-acre park. 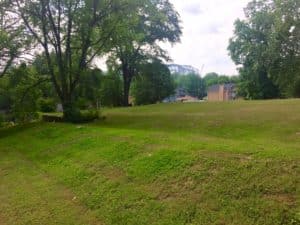 “TPL has a goal of trying to have everyone who lives in cities in America to be within a 10-minute walk from a park and a safe place to play,” Soper said. “The city does not need to own all 16 acres to have a great park.”

McPhee said she would like to see earlier ideas of having a park inspired by famed architect Frederick Law Olmsted incorporated in the new design.

“There’s a lot of respect for the work that has been done,” she said of the National Monuments Foundation and its founder Rodney Mims Cook Jr. “We will have an even better park than what was conceptualized.”

When the preliminary design has been drawn up in the next couple of months, it will be shared with the community for its input so neighbors will be able to continue to participate, Phuong said.

Atlanta Mayor Kasim Reed announced the initial funding for Mims Park as one of the city’s commitments at the 2016 Clinton Global Initiative America that met in Atlanta June 12-14.

When asked when the Mims Park project might be completed, McPhee said, “The aspiration is that the mayor would like to cut the ribbon before he leaves office.”

As Soper said, “We want to make the community a great place to live. We are going to have an aggressive schedule We think by the end of 2017 is definitely possible.”