Nearly two years ago — between March 11 and March 13 — the world stopped as we know it because of the COVID pandemic.

Now our world in Atlanta is reopening — almost as quickly as it closed — a fact that hit home this past week.

First, the Centers for Disease Control and Prevention loosened the restrictions related to mask-wearing and gatherings in public based on the community levels of COVID infections and hospitalization. In Fulton, DeKalb, Gwinnett and Clayton counties are all low risk, but Cobb County is at medium risk.

Second, Atlanta Mayor Andre Dickens announced that the city has ended the city’s indoor mask mandate based on the new CDC guidelines.

Plus, over the past week and this weekend, there were a host of gatherings — reconvening as in-person events with great fanfare. One could feel the lifting of the two-year drought of human contact with the endless virtual meetings on Zoom or having to meet in socially distanced environments wearing masks. 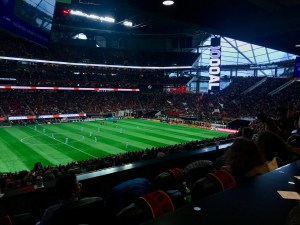 Atlanta United fans celebrate one of the three goals the team earned at the match on Feb. 27. (Photo by Maria Saporta.)

The best coming-out party was Sunday’s Atlanta United season opener at the Mercedes-Benz Stadium, where Atlanta won 3-to-1 against Sporting Kansas City before a nearly sold-out crowd of more than 65,000 fans.

That’s when it really hit me. We have shifted from living with a pandemic to now living with an endemic. The Rotary Club of Atlanta Monday featured a virtual conversation with Dr. Rochelle Walensky, director of the CDC, and Dr. David Ross, president and CEO of the Task Force for Global Health. The topic: “Pandemic to Endemic?”

Katharine Kelley, the 2021-2022 president of Atlanta Rotary, said the club was returning to in-person meeting on Monday, March 7.

That opening spirit filled the Mercedes-Benz Stadium as thousands of us celebrated a unique Atlanta moment in this COVID era. We were able to gather without wearing masks and without self-consciously trying to stay six feet apart.

There were numerous other events this past week with a similar joyous feeling that we could once again reconnect with people we had not seen for months, if not years.

Junior Achievement of Georgia held its annual Hall of Fame event on Feb. 26 at the Intercontinental Hotel in Buckhead after a one-year hiatus honoring two Atlanta leaders — Mark Becker, the past president of Georgia State University; and Ernest Greer, co-president of Greenberg Traurig. 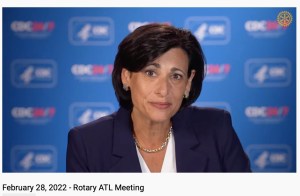 Dr. Rochelle Walensky during the virtual program of the Rotary Club of Atlanta on Feb. 28. (Screenshot.)

The Corporate Volunteer Council of Atlanta held its quarterly meeting on Feb. 23 at the Russell Innovation Center for Entrepreneurship (RICE). The topic was the Atlanta Way and the Atlanta Way Today — and I loved moderating a lively discussion between Jay Bailey, president and CEO of RICE; and Ed Baker, long-time publisher of the Atlanta Business Chronicle who is now an executive in residence at Georgia State University’s J. Mack Robinson College of Business.

All these events (and others) felt like Spring. Everywhere I went, it felt as though flowers were blooming and people were coming out of the shadows of winter and the pandemic to welcome seeing each other in person.

Each event also shined a special light on Atlanta today.

My son David and I were fortunate to be guests of Dimitris Psillakis, president and CEO of Mercedes-Benz USA for the Sunday soccer match. The suite was filled with an amazing international flair with people who had lived all over the world. People freely spoke German, Greek, Portuguese and French — paralleling the cosmopolitan spirit Atlanta United has brought to our city.

Theodoros Dimopoulos, Atlanta’s Greek Consul for the past 18 months, was attending his first event at Mercedes-Benz Stadium, and he pledged it would not be his last.

Psillakis and his Brazilian-born wife, Maura, who have been in Atlanta for just over a year, had only been to a couple of events at the Mercedes-Benz Stadium before Sunday’s game. It definitely was a coming out party for all of us.

2022 Hall of Fame honorees –Ernest Greer and Mark Becker — stand on either side of John Hancock, president and CEO of Junior Achievement of Georgia. (Photo by Maria Saporta.)

The night before, at the JA Hall of Fame event, President Becker described how his views of Atlanta had evolved since first becoming GSU’s president in January 2009.

Becker admired “the way the business community comes together to support this city in all aspects – philanthropy and government… The civic society, business and government working together is why this is the capital of the South.”

Greer was equally effusive. He also offered to mentor the JA student who had introduced him – Corey Crenshaw.

“It’s about mentorship,” Greer told Crenshaw, a 3DE student at Norcross High School. “We just want to keep you in Atlanta.”

Then Greer spoke of his love of Atlanta.

“This city has had a significant impact on me,” Greer said. “Thank you once again for allowing me to achieve a dream of success while having a life of significance in my favorite place on earth – Atlanta.”