No one seems to talk about stalactites in the Florida caverns, or the bass and ducks in and around Lake Seminole. Oysters, farmers and metro Atlanta get all the attention in the ongoing water litigation between Georgia and Florida. Last week’s hearing was no different. 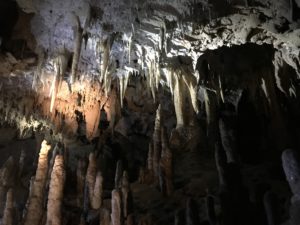 Sediment was hauled out of the main cavern at Florida Caverns State Park by Civilian Conservation Corps workers in the 1930s so the cavern could serve as a public park and tourist destination. Credit: David Pendered

The Nov. 7 hearing was ordered by a federal judge named by the Supreme Court to advise justices on how to resolve the biggest water war east of the Mississippi River.

Lawyers for Georgia and Florida reiterated the points made in briefs filed in January, which track the briefs filed since the most recent litigation began Nov. 3, 2014, when Florida sued Georgia in the Supreme Court.

Meantime, near Marianna, Fl., a tour guide was trying to explain why the renowned ponds in the cavern don’t have water. The underground cups in concave spots in rocks that typically hold water aren’t much bigger than a birdbath. All but one was dry in Florida Caverns State Park.

Altogether, there seems a shortage of water to spur the growth of stalactites, stalagmites and flowstones – known collectively as speleothems – that can be used to determine past climate conditions, according to a report by NOAA’s National Centers for Environmental Information. 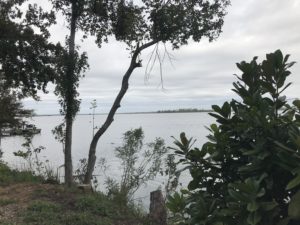 Lake Seminole is a destination for fishermen and hunters, whose treks support the local economy in at least three seasons a year. Credit: David Pendered

What the guide offered was a layman’s description. It seemed to satisfy the dozen tourists whose visit may not have been enriched by possibly relevant technical data raised in the courtroom – average water flows in the Apalachicola-Chattahoochee-Flint river basin; fluctuating water levels in the Floridan Aquifer; salinity levels in the Apalachicola Bay; the degree to which the U.S. Army Corps of Engineers should be accountable for river flow in the river basin as the corps manages dams along the basin for purposes of hydroelectric power, recreation and flood control.

The corps’ official river flow procedures have been specifically cited as a contributing factor to the reduced river flow into Florida. That point was made in a recommendation submitted in 2017 by the first special master who represented the Supreme Court in the current litigation.

Justices dismissed the special master’s legal views as too strict in his concluding recommendation for Georgia and against Florida. The justices relieved the special master who wrote it, an acclaimed Maine lawyer named Ralph Lancaster (who since has died and written in his advance obituary notice that he wanted no professional accolades), and handed the whole case over to U.S. District Court Circuit Judge Paul Kelly, Jr., who last week listened to the lawyers in an Albuquerque courtroom. 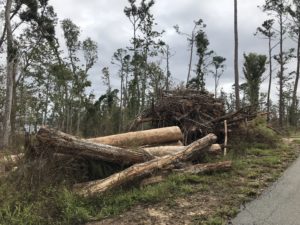 Three Rivers State Park, on the Florida side of Lake Seminole, was devastated by Hurricane Michael and work to clear downed trees is ongoing. Most campers in the camping area had Florida tags, suggesting folks who lost their homes reside there. Credit: David Pendered

Kelly is expected to issue his recommendation in time for justices to review it and announce a ruling before their session ends, in late June or early July of 2020. Kelly has previously asked if any new material needs to be introduced, suggesting he could rule on the evidence in his hands.

Meantime, the status of Lake Seminole has recently been amplified in the case. It’s the last reservoir in the ACF basin to be created by a dam managed by the corps. The Chattahoochee and Flint rivers meet there and combine to form the Apalachicola River. The Apalachicola flows into the Apalachicola Bay, where the decline in the oyster harvest has been a significant talking point in Florida’s case. Georgia has responded that Florida hurt its own fishery by allowing heavy harvesting when oil that spilled following the Deep Horizon oil well explosion in 2010 threatened to flow into Apalachicola Bay. The situation was grave enough for oil booms to be installed at Panama City Beach, Fl. to prevent oil from washing into St. Andrews Bay.

In an order dated Dec. 6, 2018 Florida received the judge’s permission to revise a question to state: 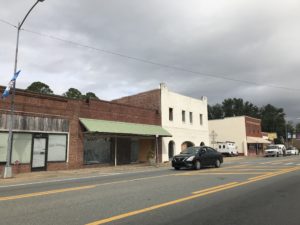 The storefronts along Washington Street in downtown Chattahoochee, Fl. are shuttered despite the salaries paid by the nearby state prison and state hospital. Credit: David Pendered

Lake Seminole is a destination for bass fishermen and duck hunters. This promotes the economy for the fishing and hunting guides who serve the incoming crowd. One service, No Limit Waterfowl, charges $250 per day per gun. Another provider serves both fishermen and hunters, and Aaron’s Lake Seminole Guide Service has this to say about the area:

Still, the area hasn’t recovered from the harsh blow delivered in 2018 by Hurricane Michael. Three Rivers State Park, on the Florida side, lost countless trees the state is in the process of dragging out of the woods to haul off for probable mulching. 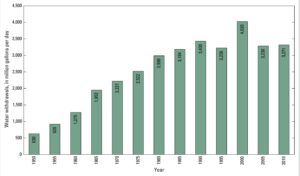 Savannah was the first to tap into the Floridan Aquifer, in 1887, and usage of aquifer water peaked after the 1950s, when much of the industrial and agricultural demands were shifted to ground water, according to a report by USGS. Credit: USGS

Nor has the local economy been strong enough to maintain the storefronts along the lakeside town of Chattahoochee, Fl. Major employers include a state prison and a state hospital, which also serves as a psychiatric facility. The jobs boards show wages of $12 to $15 an hour for most positions.

Of possible note is that the the corps, which is responsible for managing river flow at Buford Dam and south of Atlanta, is lead agency for the federal government in restoring the Everglades. The corps has overseen $2.4 billion in federal funds invested in the project, in what is to be a 50-50 state/federal reclamation effort. In terms of bragging rights, the project includes an effort the corps says is the largest ecosystem restoration project in the world. The program is important to the state’s economic engines located south of the Orlando area.

Metro Miami, with its 6.2 million residents, according to the latest Census estimate, is relying on the Everglades project to ease flooding related to sea level rise and development. Metro Atlanta, with its 5.9 million estimated population, is relying on continued access to the water resources of the Chattahoochee River. Both Florida and Georgia may have an interest in focusing on issues that don’t directly involve the corps.