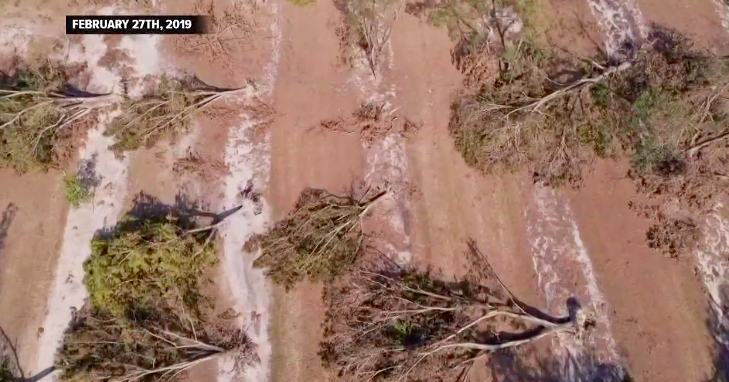 When you look at it short range, the failure to pass the disaster relief bill South Georgia farmers have been told was on the way in timely fashion is just another maddening example of Congress’s inability to do anything useful anymore.

Last week, for the third time, a single House member blocked passage of the $19 billion appropriation which includes money for farmers devastated by Hurricane Michael last October. When one member of Congress holds up a disaster relief bill, it could be viewed as a principled act. When three in a row do it, it smacks much more of school boys showing off.

The House finally mustered the votes Monday to overcome all the procedural hurdles and passed the bill.

They just can’t move traffic in Washington the way they used to, that’s for sure. Even before it hit a roadblock in the House, the relief bill had been stalled for months in the Senate, to the particular discomfort of U.S. Sen. David Perdue. Let’s not confuse ineptitude with thrift, either. Federal spending is at an all time high, the deficit is ballooning at an alarming rate, and the storm-struck farmers still don’t have any help.

When you take a long view, however, there’s a certain uncomfortable consistency between the way the relief bill has been mishandled in Congress and the Trump administration’s approach to climate change. If you’ve already decided you’re not going to worry about the weather three or four decades down the road, why worry about what happened last year?

The New York Times reports the administration has launched a broad-based effort to undermine current accepted science on climate change, including eliminating worst-case scenarios from the annual National Climate Assessment and scaling back computer-generated climate projections, which now go out to the end of the century, to 2040, when the projections don’t yet seem as bad. William Happer, a 70-year-old physicist who believes the world needs more carbon dioxide emissions, not less, has been tapped to lead a panel to review the current science on the subject.

This is taking place in a year when climate change has at last emerged as a central issue in politics around the world, although not in a way environmentalists would have hoped. Jair Bolsonaro, the new president of Brazil, has said his country “owes nothing to the world” with regard to the environment. In Australia, the party which pushed for tougher standards to meet world climate goals suffered a major upset.

It was a different story in last week’s European Union parliamentary elections. Four years ago the EU elections presaged the Brexit vote and Donald Trump’s election, as anti-immigration, far-right parties scored major gains. This year, in a much more fragmented result, the biggest gainers were the Green parties.

The Greens got the largest share of the vote in Germany, and won in Berlin, Brussels and Dublin. With traditional parties shrinking, the far right parties will have more delegates than the Greens, but the Greens are considered to be much more unified.

Returning home to the relief bill, now that Congress has muddled through and passed it, it’s time to worry about this year’s relief. The Mississippi River and its tributaries have seen some of the most persistent flooding since the Great Flood of 1927, and the year is young.

It’s often said that a single weather event is no reliable indicator of larger climate patterns. But if the climate is changing on a larger scale, the change will be experienced one event at a time. The hardest political battles won’t be about the projections of what will happen decades from now. They’ll be about the difficulty of coping with the wreckage of storm, flood, fire or drought, as the frequency of events increases.

In the future they may call this disaster relief or global warming or climate change, or come up with a new term we haven’t thought of yet. But if the frequency of climate-related disasters increases, no new panel is going to explain it away and no monkeying with scientific data is going to hide it.

Previous Article
Atlanta’s looking to repurpose a jail. It’s in a league with few other cities.
Next Article
Andrew Young on HOPE Global Forum: ‘This is free enterprise at its best’